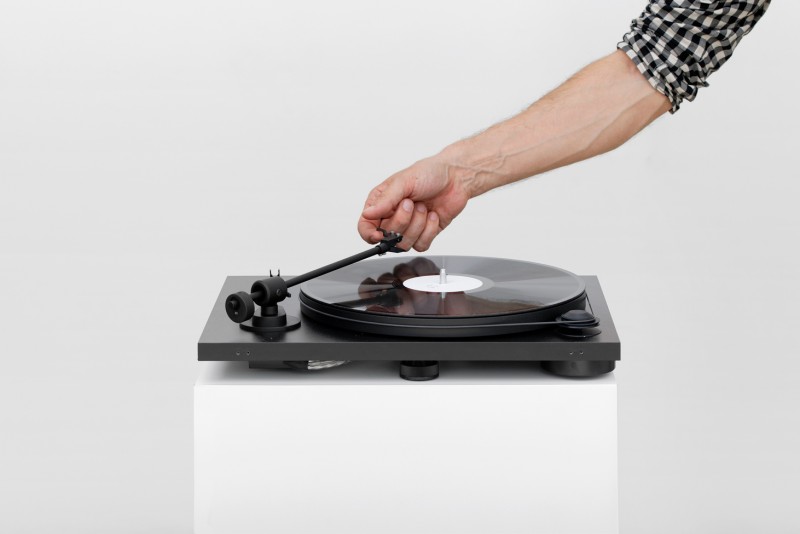 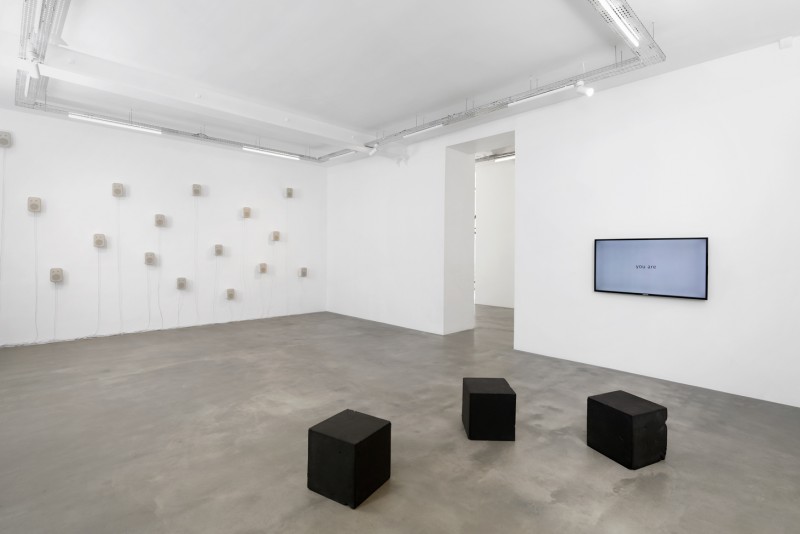 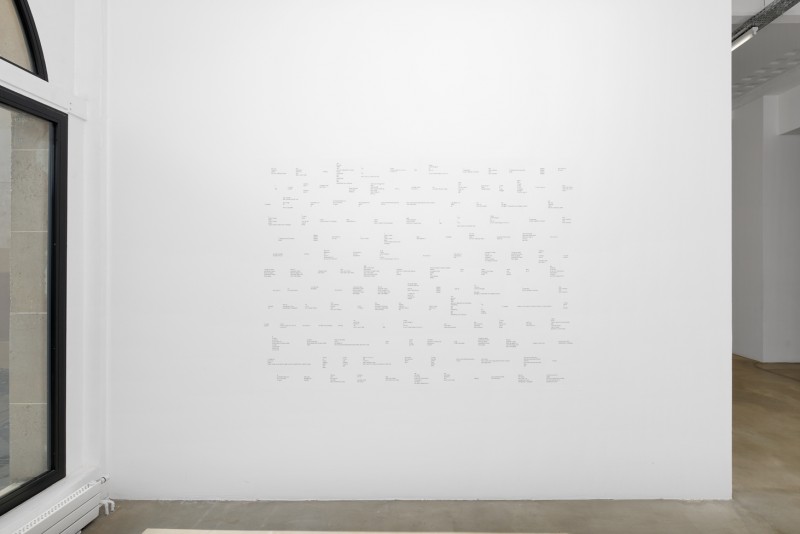 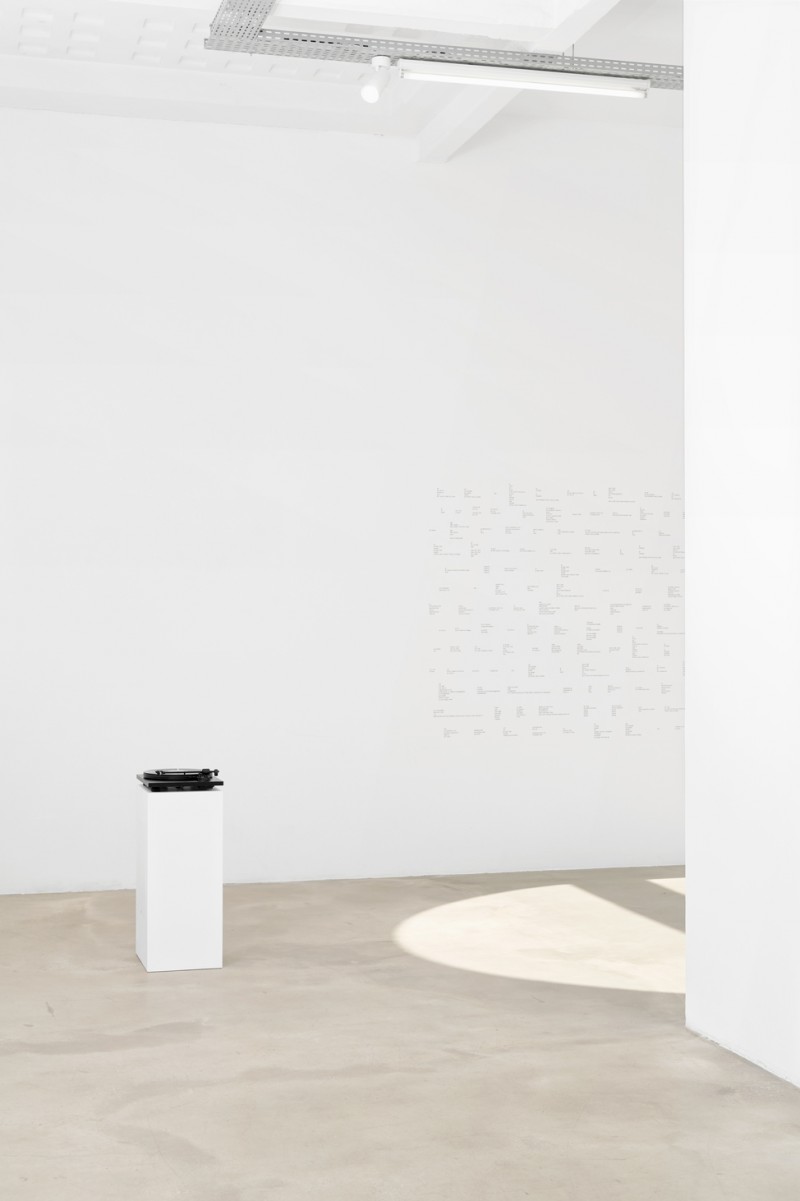 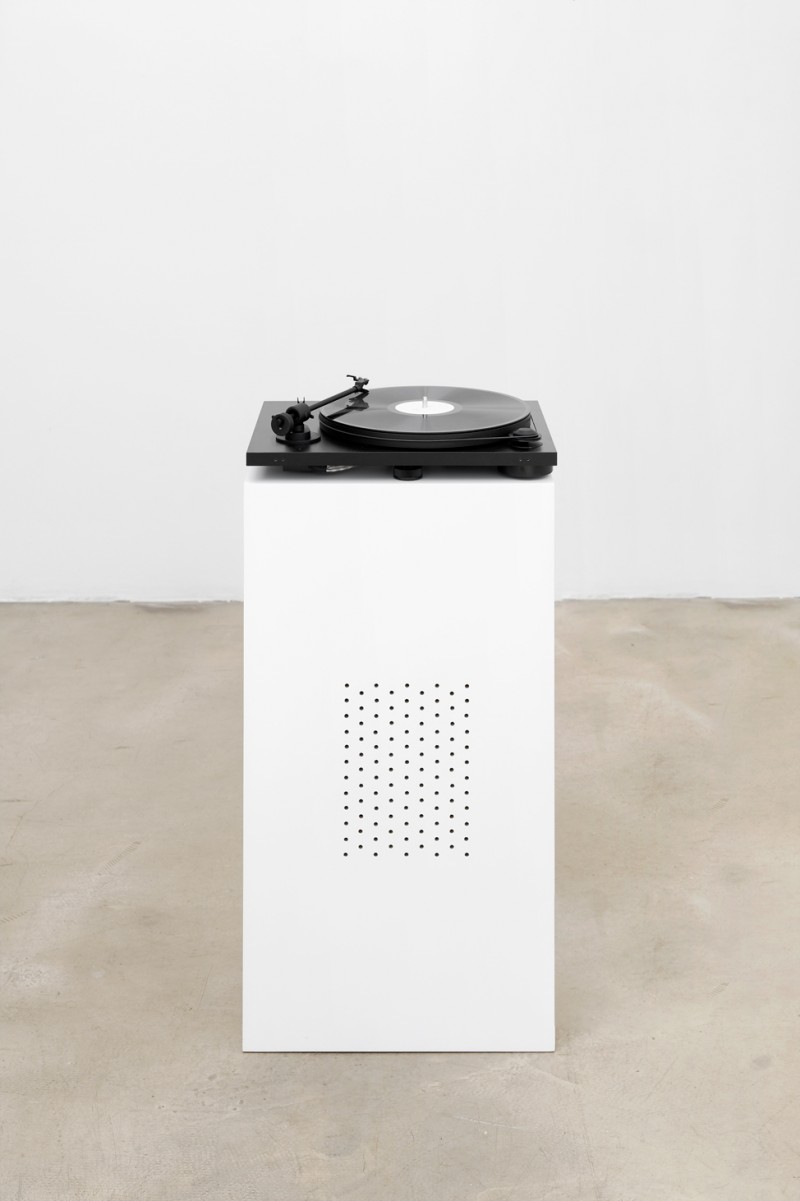 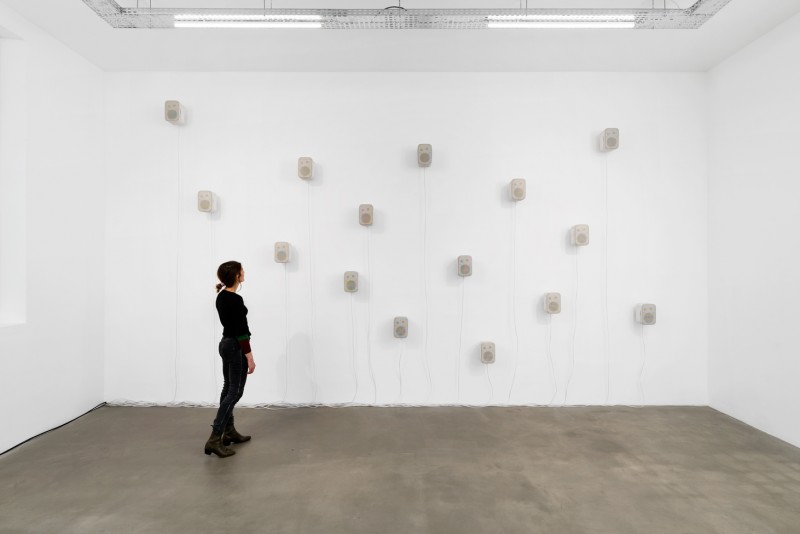 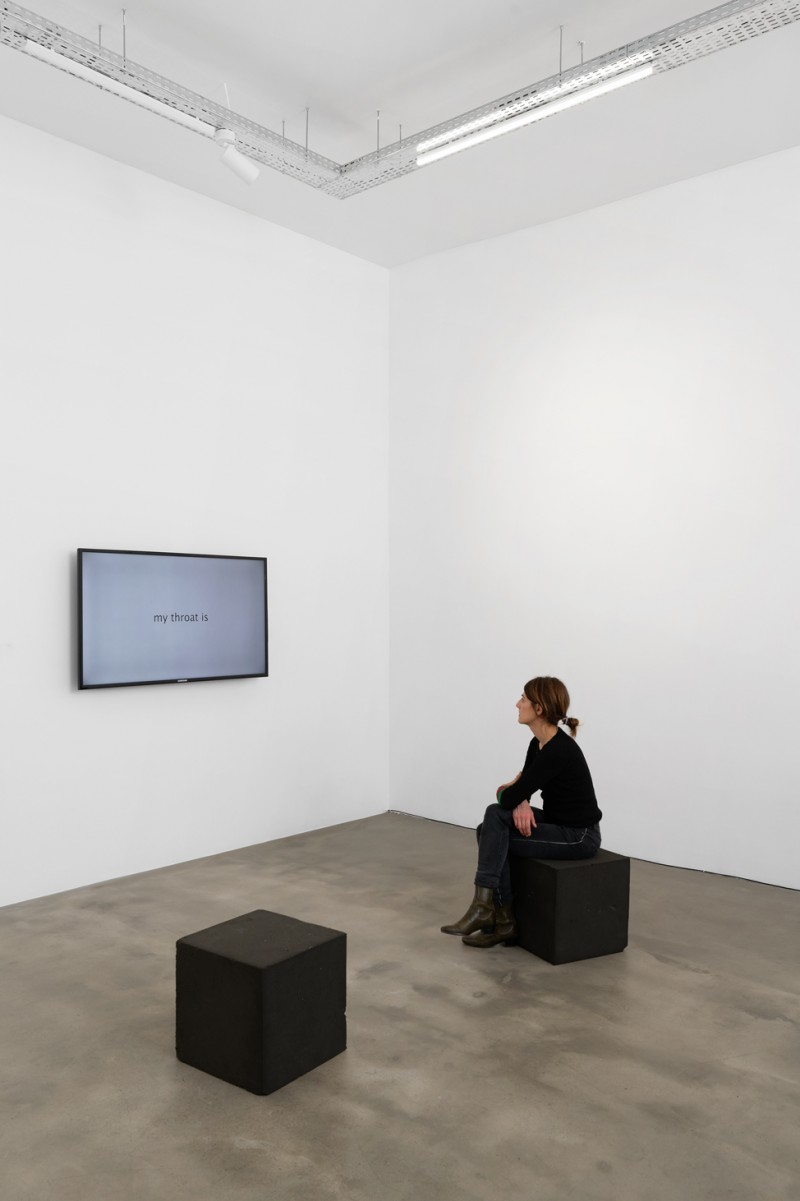 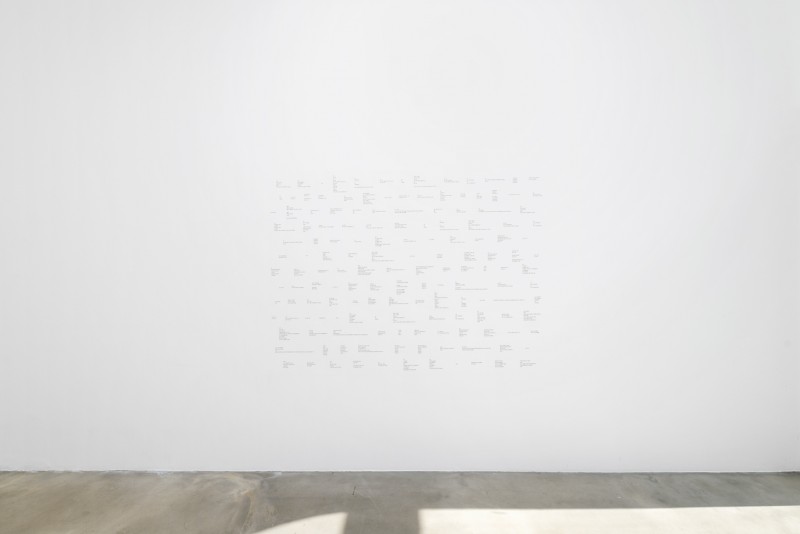 For the title of this exhibition I wanted to emphasize the placement and perception of the pieces, the sound as it circulates and emerges from each to the next, rather than focusing on the sounds themselves. “Suspended Listening” is the title of the exhibition but also of the main piece in the show. I wanted to include notions of instability, mobility, and a bit of volatility and intangibility in the name. Suspension in a vacuum is a theme that’s common to much of my work: the empty space between voices, between syllables and phrases; the suspension of time, the intervals between sounds. But also the emptiness between walls, the nothingness, space, and movement from one point to another, and expanses. Listening itself circulates from one piece to another, isn’t anchored to objects but travels among them, switches sources and relocates.
In this exhibition I’m able to mix multiple sources and technologies, different sound delivery systems and ways of *introducing and concealing sound, while highlighting the transition from the oral to the written and the rivalry between listening and reading.

L’écoute flottante (Suspended Listening)*
Sound installation with 16 speakers and 2 screens
Multiple voices mix in a mural of a conversation. In diminishing order, words are fragmented, suspended in the void and truncated—from sentence to word to syllable until ultimately to breathing, snickers, coughs, humming and exhalations.As with the speakers, the voices are spread across the wall in a constellation and circulate from one place to another according to their own twists and turns.

The short sentences sound like excerpts from stories, conversations and other multiple contexts, yet give the impression that the main meaning is missing. In fact, these are not only phrases taken from recordings I’ve been using for years, but also extracts from older and more recent works. The installation brings together fragments from more than twenty other pieces.

By editing the sentences, they’re reframed and take on if not the status of aphorism, at least they become mild affirmations, singular and enigmatic. Sometimes the edits can result in abstraction. It’s a risk I take knowingly, aware that the abstraction is counterbalanced by the very strong presence of reality, of the material presence of voices and varieties of enunciation: the nature of voices, the sonority, the breath and exhalations, the pace, the hesitation, the accent… all of that human presence.

The voices appear in a void and are punctuated with sporadic silences. Each silence, an abrupt and sudden halt, is loaded with the tension that emerges upon the suspension of human presence and its possible return. A return that’s expected, desired and delayed. Every silence is like a bridge linking two moments, a space that’s capable of harboring all our expectations.

Two adjacent screens, one for French, one for English, transcribe the collection of audible words. But only those that are intelligible.

At the beginning I only intended to provide an English translation, but that got complicated and then expanded. I realized that a visual transcription of the phrases was useful for everyone, including Franco- phones. So I translated from French to French, and focused on the gap between listening and reading. The appearance on screen of what one is hearing becomes a hook for hearing, a support, at the risk of redundancy or dissonance (since hearing is not reading).

Soupirs
Sound installation with vinyl and 1 speaker
Soupirs is a suggested accompaniment, an intermittent musical presence, either in a corner or out in the center of a space, like a fountain or a clock that chimes from time to time. It doesn’t operate on schedule, but rather on demand, for a fixed duration (the length of a vinyl record). It’s a musical ambiance to which one pays full attention or not, it can be ignored or not, with long silences between notes.

The length of the silences is unequal, making the flow of time irregular, wonky and arbitrary. Just as with the voices installation, the long or short silences between notes are loaded with the tension of the suspension of a musical presence and its potential return.

This is one of the few pieces of mine where I delegate the initiation and the timing of listening. Typically these factors are part of the structure of the piece. Here they’re unregulated and shared.

Les voix blanches (map) Light voices (map)
Print - English version
I’ve always transcribed my works. Once I finish editing, the transcription makes the text visible and formal. It’s something that comes afterward, and can take many forms. This map is one of those forms. Neither linear nor vertical like most of the transcriptions that I publish in books or catalogs, this time it’s spatial, panoramic, geographic, like a map that fills the entirety of an enormous white page. Enormous in the sense that the dimensions I’ve chosen are to a scale such that the image produced and hung on the wall are bigger than a person. Big enough to get lost in, so you have to step back to see the whole of it, and at the same time have to get close to read and understand the details.

It’s always been my objective to create the conditions for a plurality of listening and plurality of attention. Lately I’ve gotten the impression that these two mental efforts are the same thing. Plurality, because there isn’t one way of listening over another. All are welcome, including the ones that are sometimes looked down on because they’re thought not serious, like fleeting attention, distraction, free thought…all types interest me. Similar to the visual where it’s possible to change focus and perspective to look at a landscape, going from the center to the edges, from a view of the whole to inspecting a detail, I try to create sound forms and arrangements without dictates and whose meaning benefits from this plurality of approaches and listening.

To that end, I believe I’m helped by what working with time can add: works shaped like dashed sequences, the fragmentation of sound and voice components, silences that create and interrupt attention spans, the independence of sequences as well as their presence in a greater whole, listening for details as well as to the completion of an ensemble. But also by playing with space: the placement of the pieces in the space, on the walls or floor, the movement of the public, mobile or stationary listening, near or far, all the distances, perspectives and echoes.

thanks to Charlotte Imbault and Jean-Philippe Derail