A common feeling grew out of a meeting between the New York gallery Murray Guy and gb agency, and is the realization of discussions between the galleries which identify with each other.
Attempts at building connections between them have given rise to a broader perspective for both galleries in the way they understand and communicate, and to each one’s approach to art itself. We created links and potential arrangements of exhibitions before finally selecting one. In a few weeks the gallery in New York will offer different perspectives. The exhibition reveals conceptual roots that remain strong even while its artists break free from the dogma and aesthetics of that movement. In individual and inventive ways, each one tests the boundaries. 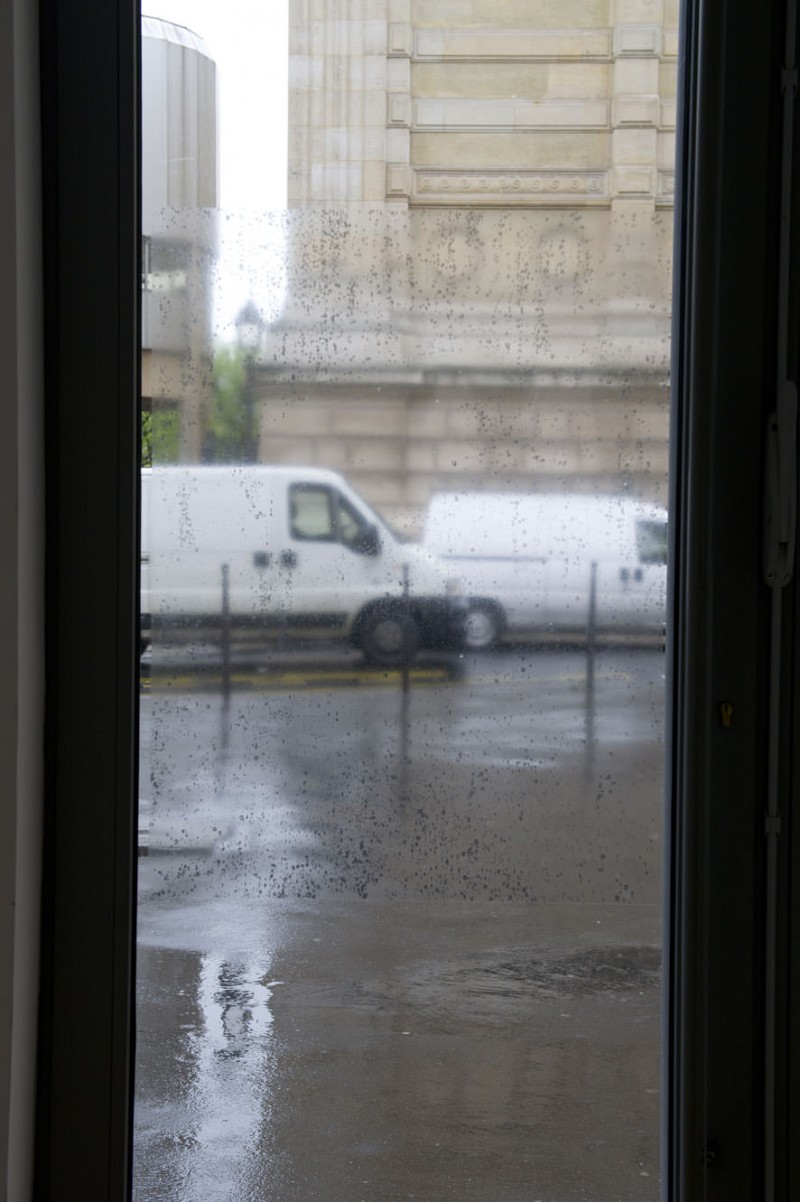 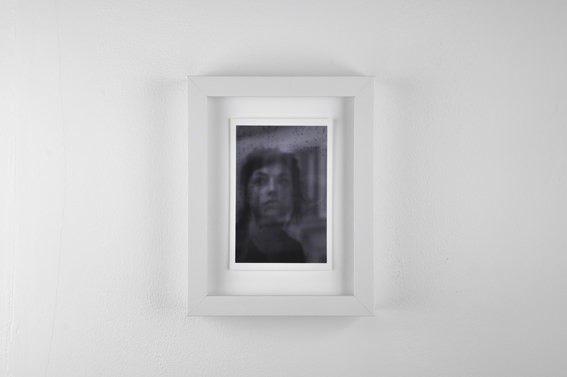 The work consists of three components: a transparent film placed in the window of the gallery, a photograph of the invigilator of the space and a book of matches in which an ISBN number has been noted. Rain droplets have been printed on a transparent film, which has been placed in the window of the space. In the centre of the film the rain droplets appear to have been wiped by someone’s hand, providing a framed viewable area into the gallery. Behind this wiped area sits the invigilator of the space. A small black and white photograph framed on the wall shows an image of the face of the invigilator gazing out of the window through the rain into the street. On the floor of the gallery is a book of matches, discarded and free for a visitor to pick up, investigate or take. Inside the book of matches the viewer finds a series of numbers written by hand that on first appearance seem to be a telephone number, but on further investigation materialises as ISBN classification of a reference book directing the viewers experience beyond the realms of the gallery, the work continues elsewhere, in the world outside. 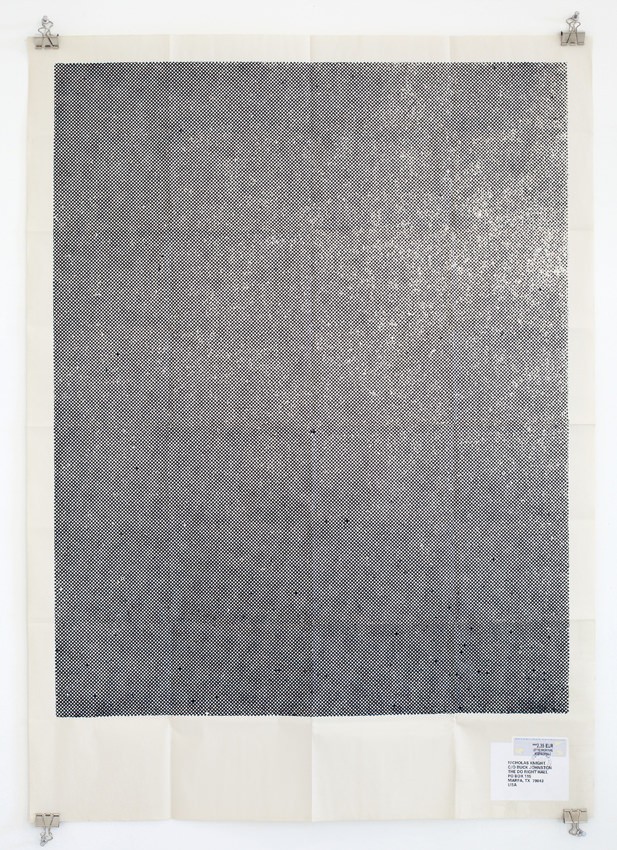 Framed screen printing on newspaper
Enlargement of the space reproduced on the first page of Dimanche, the newspaper of a single day published by Yves Klein on Sunday, November 27, 1960. 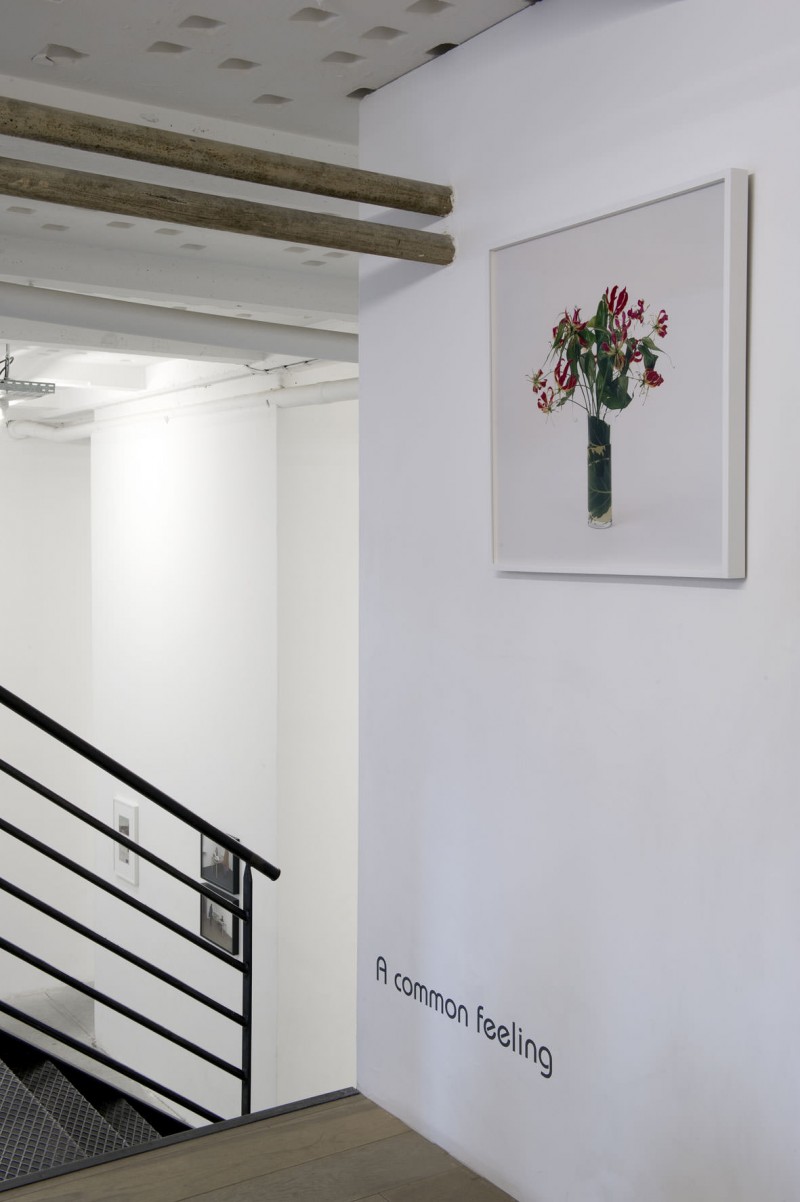 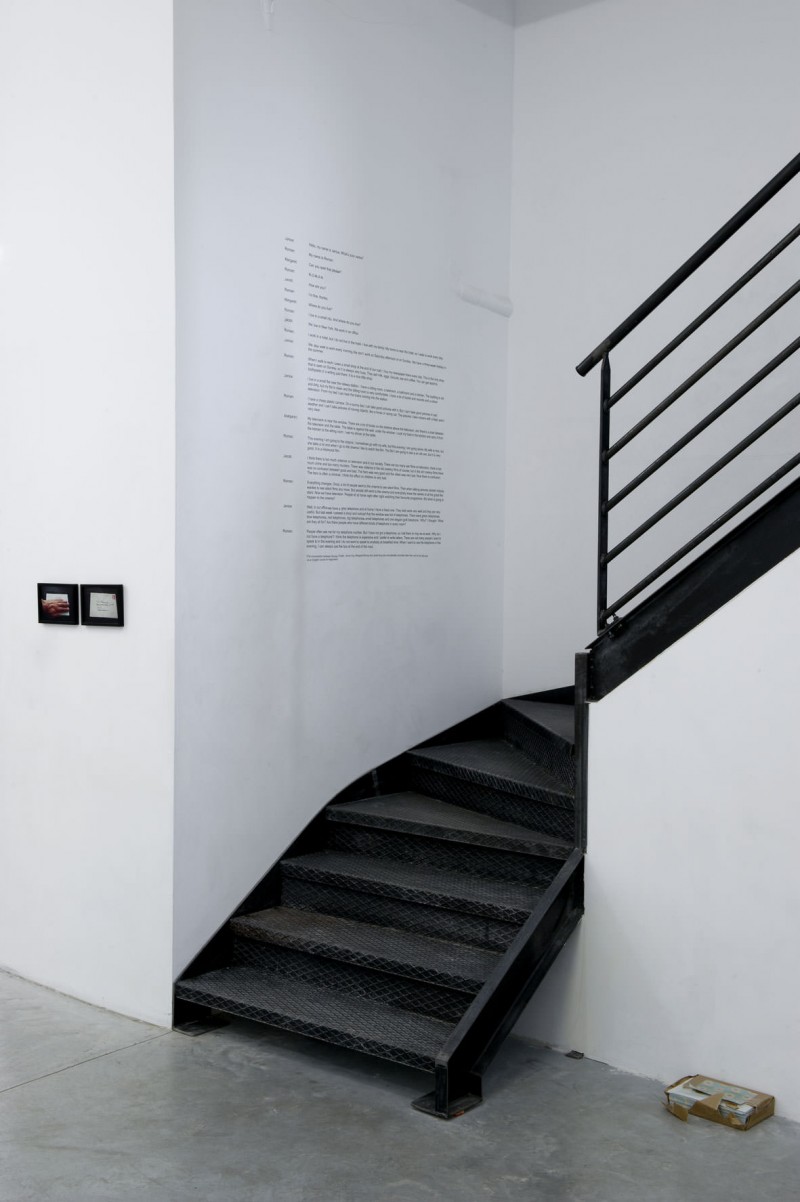 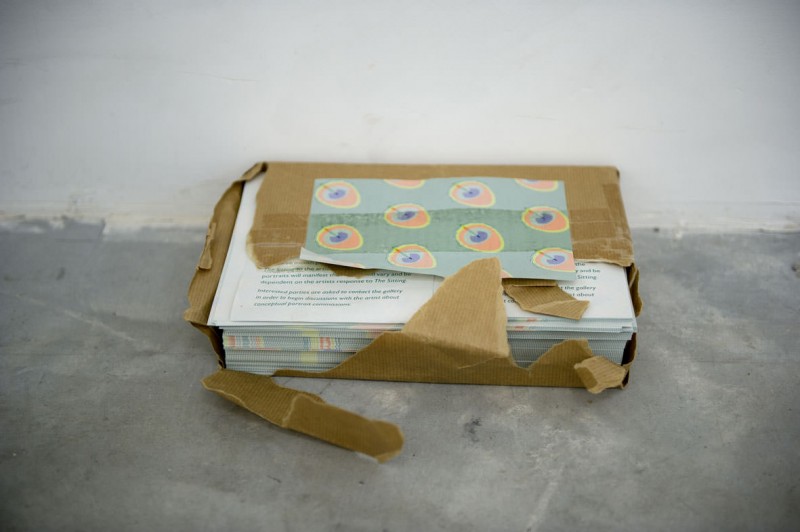 Ryan Gander
Announcement for the Book ‘The Sitting’, 2009 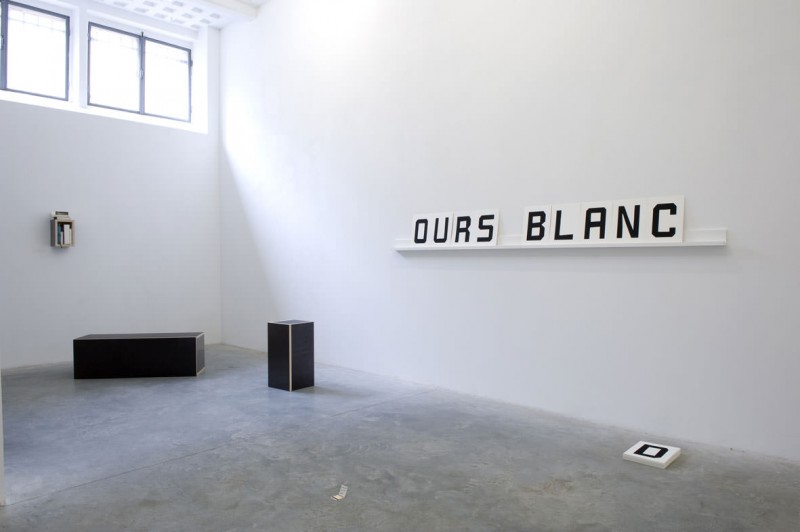 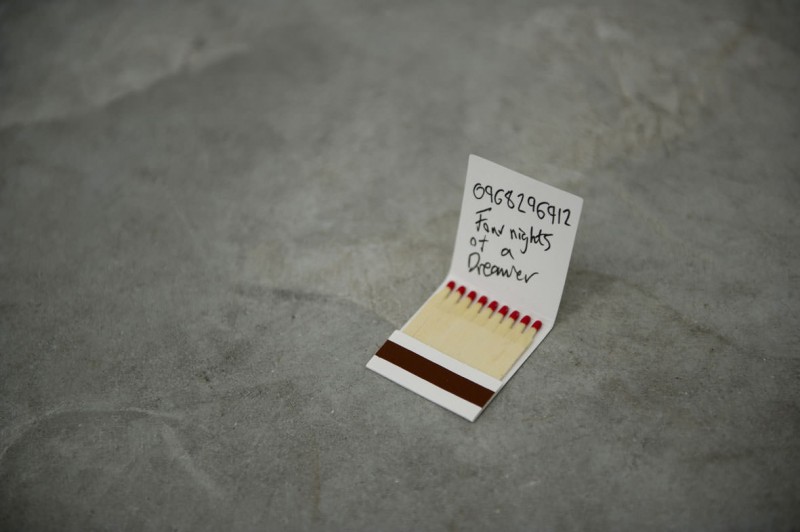 Ryan Gander
You can wonder off in time and space, visit a place you once knew, make love to a woman you loved…, 2009 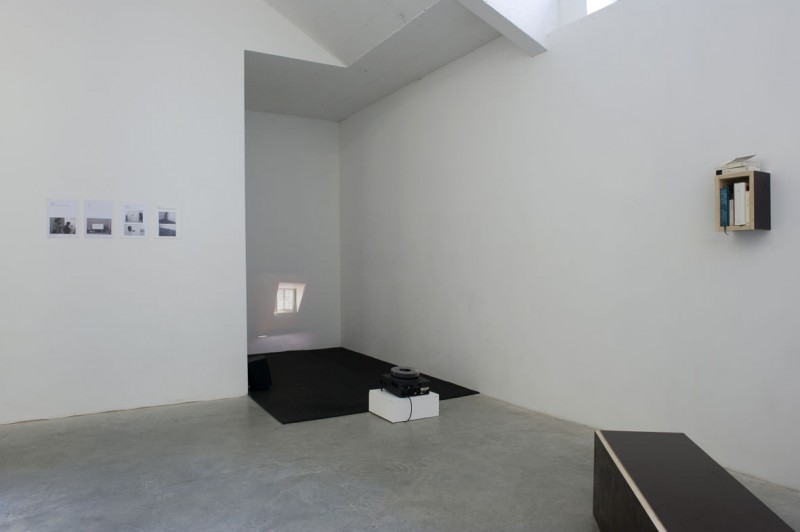 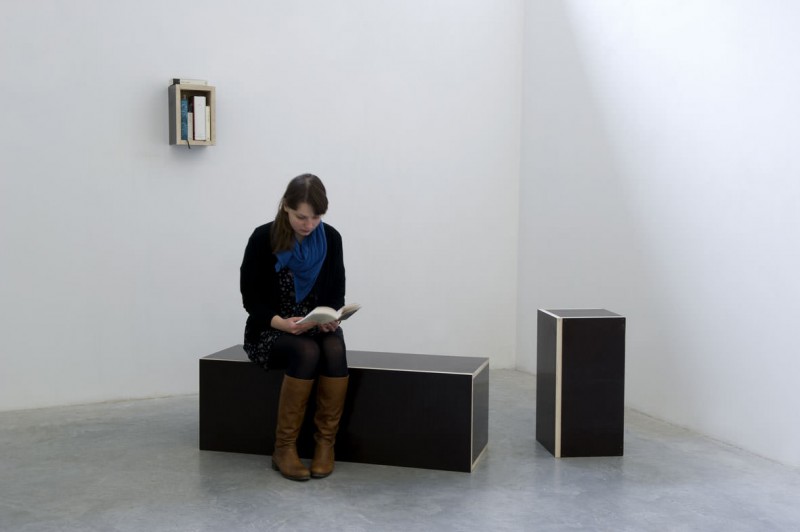 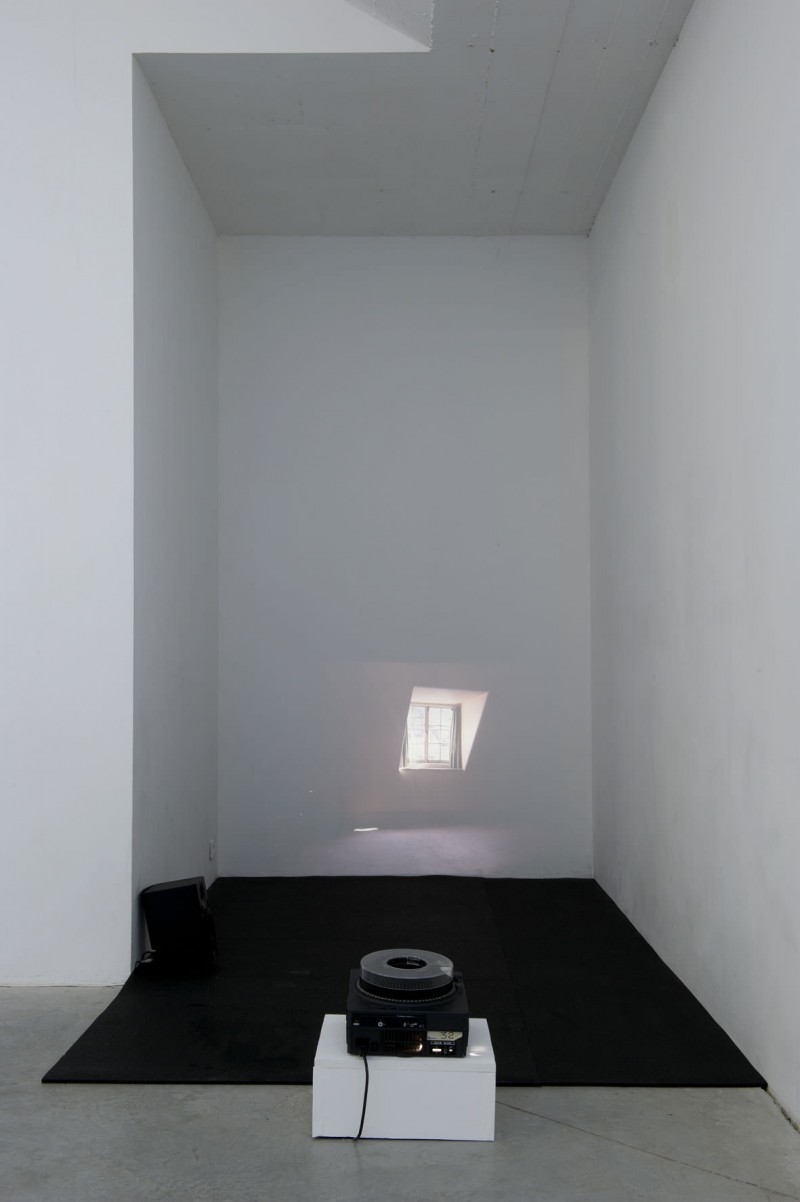 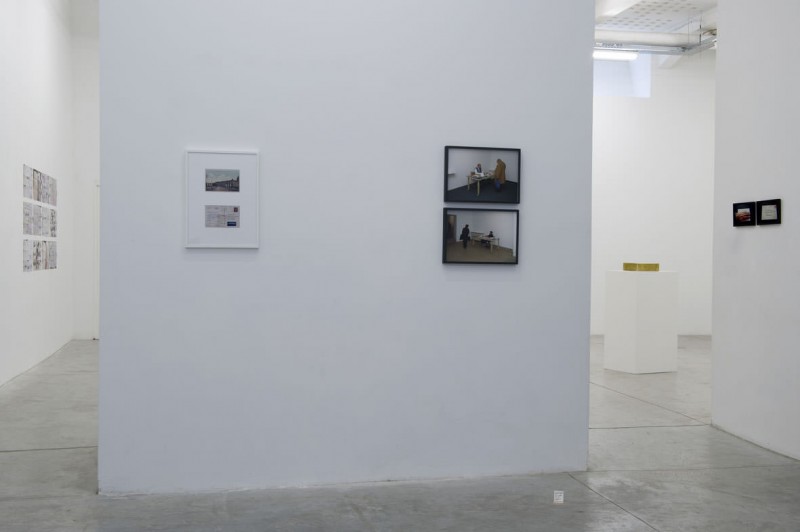 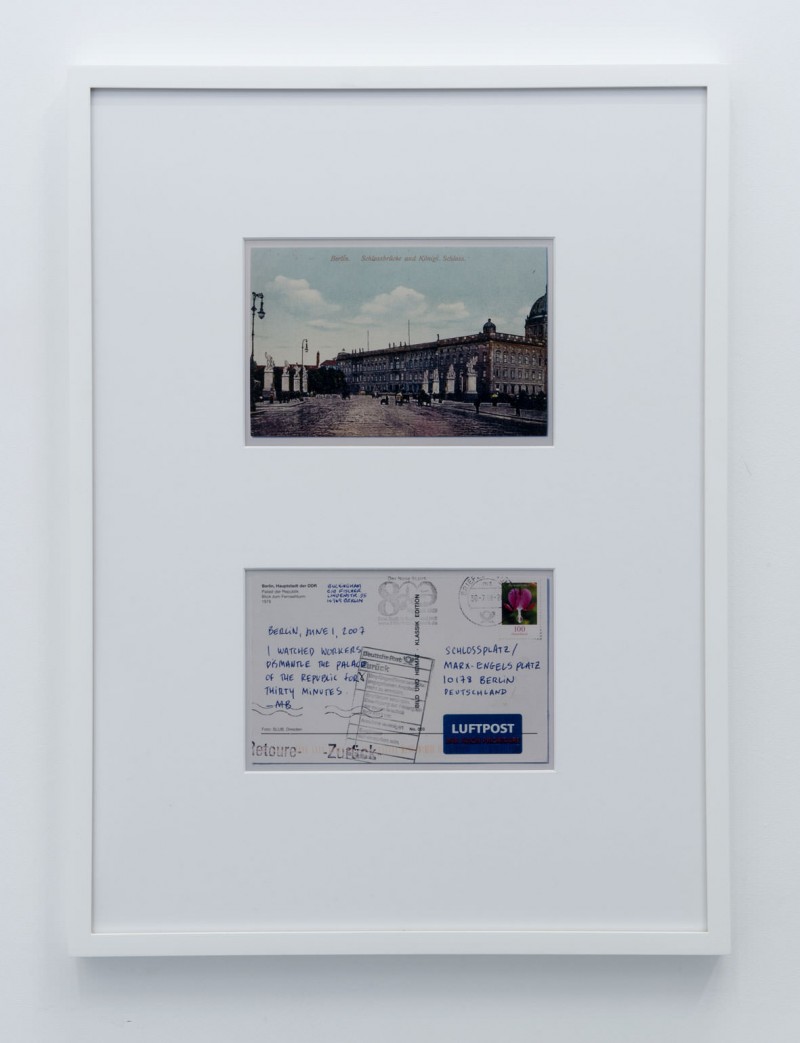 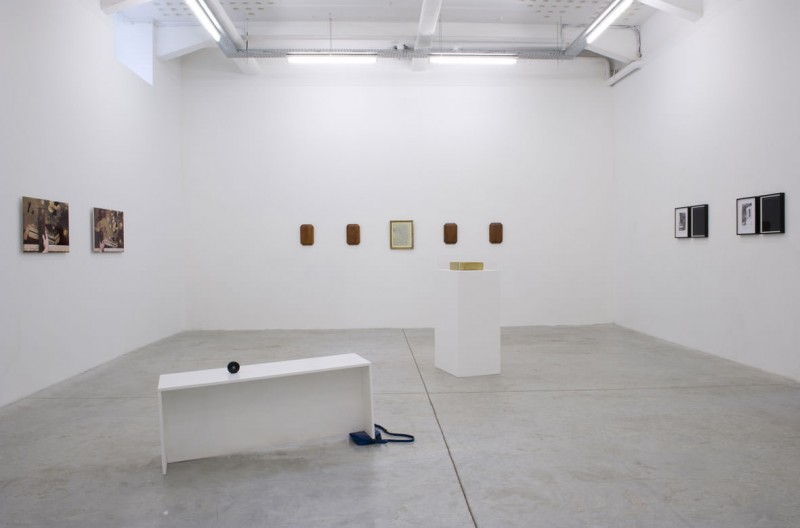 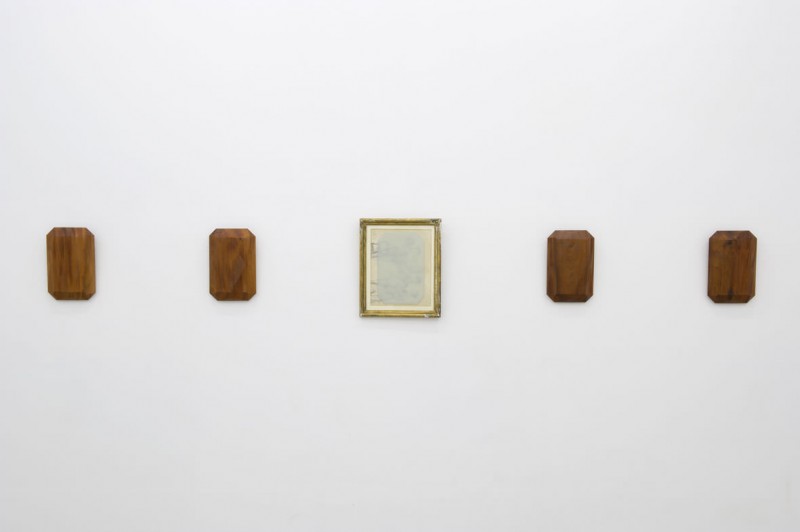 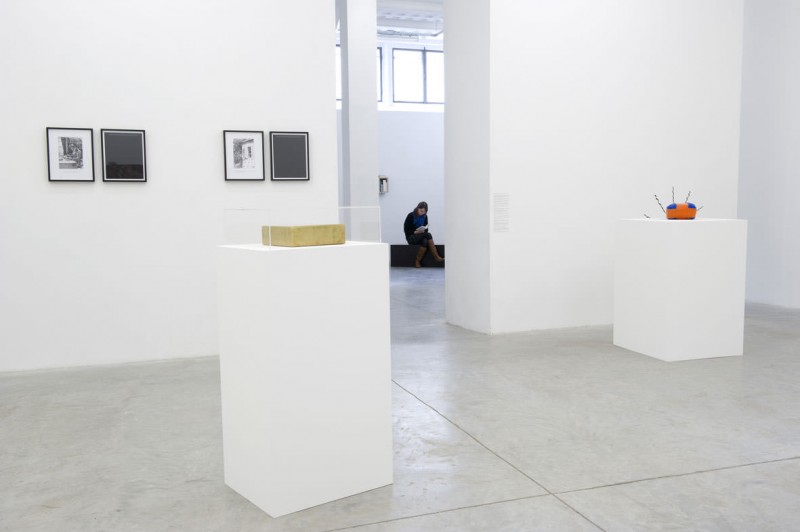 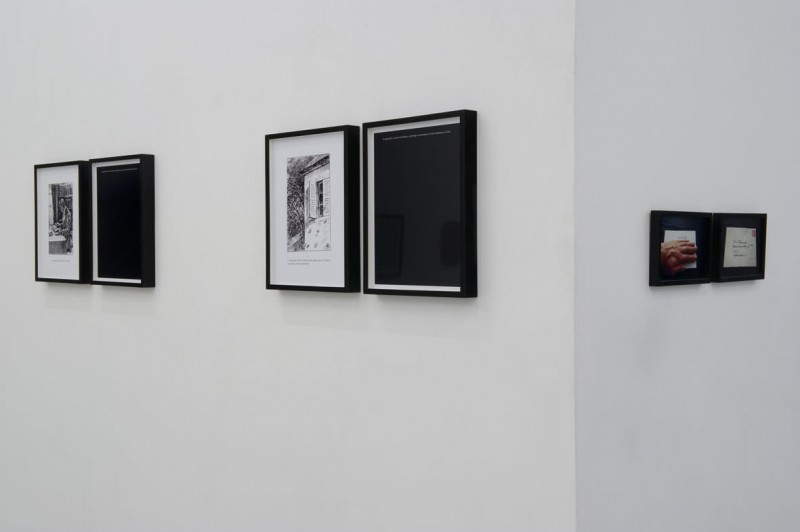 Alejandro Cesarco
A separation, A scene of Violence, An Abrupt Consciousness Of The Monotony Of Time, 2008 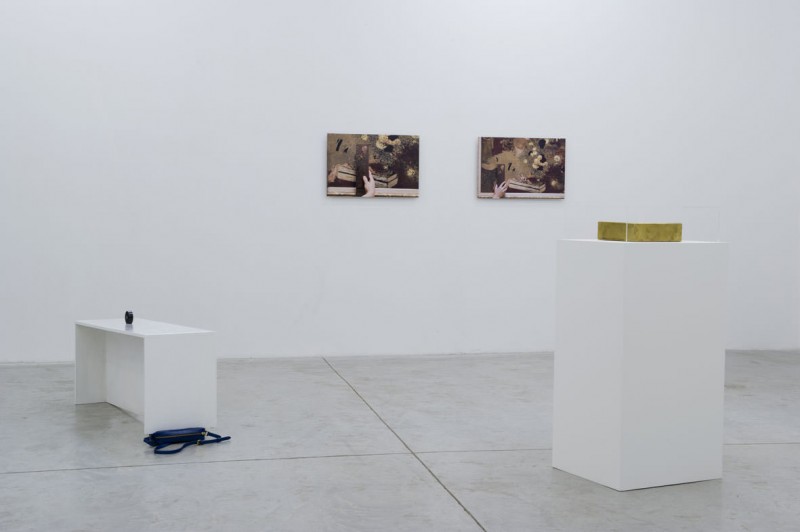 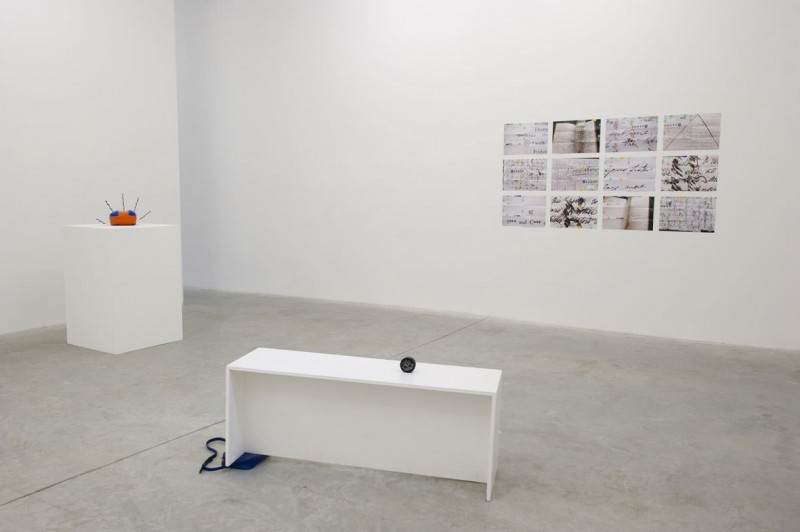 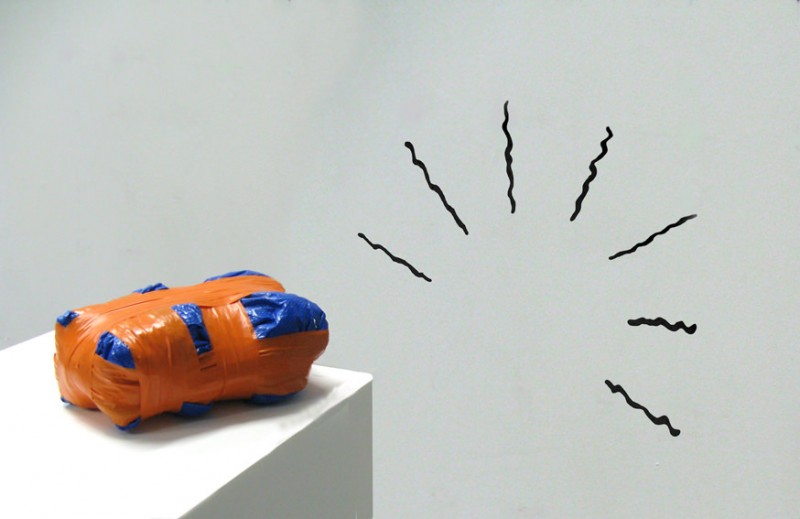 A package of plastic sheeting wrapped in gaffa tape to resemble an ‘illegitimate yet unidentifiable package’ positioned on a pedestal, containing objects and articles from the artist’s collection on the theme of ‘illegitimate and the unidentifiable’. A rubdown transfer text disclosing a description of the objects within the bag is positioned on a wall at some distance from the object. 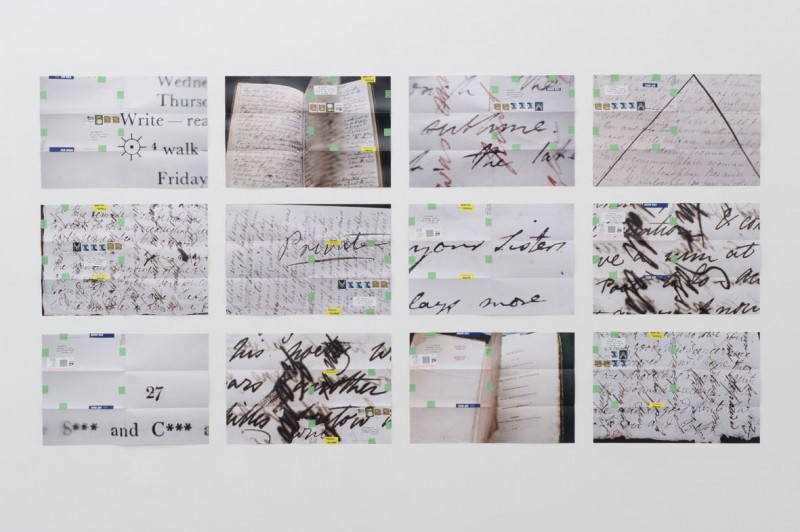 A common feeling highlights the moment when the artist opens the door, welcoming the “other” into his work, underlining the point when this other takes part in the creative process; when it becomes both the starting point and the final destination; when the other is the trigger of a story, the omnipresent element around which all others orbit; when the work becomes a means for contextualizing and creates micro-events that promote propinquity.

The form of the correspondence used in Moyra Davey’s work is echoing to the epistolary exchanges of Pia Rönicke. Both transform their intimacy into a public apparition. Paying homage to charismatic women. In Letter Pia Rönicke writes to Le Klint; in the photographic installation Claire, Mary & Mary Moyra Davey structures her work around personalities as Mary Wollstonecraft, Claire Claremont and Mary Shelley. Beyond the autobiographic and historical dimensions, both artists position themselves in the social field addressing themselves directly to others.

In a more imperceptible way, some artists put the viewer inside the device of the work itself. Playing with different processes of revelation, apparition and disappearance Ryan Gander’s work requests the viewer to be active. Into his workYou can wander off in time and space, visit a space you once knew, make love to a woman you loved… consists of three components; on the floor of the gallery is a book of matches, discarded and free for a visitor to pick up. Inside the book of matches the viewer finds a series of numbers written by hand that on first appearance seems to be a telephone number, but on further investigation materializes as ISBN classification of a reference book directing the viewers experience beyond the realms of the gallery, the work continues elsewhere, in the world outside. With Roman Ondak the exhibition is an evolving space of performance. His presented micros and anti-events, situations that are at once simple and complex, and non-linear fictions neither open nor close the way things unfold, but rather activate the viewer’s reception process. Interview retranscribes a fake conversation between the artist and the person who collects or shows the piece during an english course for beginners.

I love you is a public billboard where Jiří Kovanda declares his love and gives his phone number, supposedly waiting for an answer. The artwork becomes then a pretext for communicating with someone else. Sometimes, the encounter with the other can take the form of a tribute like in Lucy Skaer’s Us to Them, a series of 5 photographs taken in front of Edouard Vuillard’s painting The Album. The artist creates her own composition and the master becomes part of it. With Alejandro Cesarco, the artistic filiation can also be the starting point of a work: a bouquet of flowers was sent to a selected group of people. A card with the following text accompanied the flowers: this scupture by Alejandro Cesarco is sponsored by Socrate Sculpture. Flowers were sent to: Vija Celmins, Elizabeth Peyton, Roni Horn, Yvonne Rainer, Lynne Tillman, Louise Lawler, Yoko Ono, Rachel Harrison, Andrea Fraser and Sherrie Levine. According to the artist, it was an act/performance for a one-person audience, a political gesture he described as micro-relational but also a way to make someone happy.

Sometimes the artwork is being built thanks to the other (actors, collaborators or collectors). Announcement for the book ‘The Sitting’ is a small bundle of newsprint flyers announcing calls for subjects for commissioned conceptual portaits by Ryan Gander. One can read a description of the process and procedure of the commission, including the time frame and what can be found into the book ‘The Sitting’. This book contains roughly 160 pages with questions and tasks to be be filled by the collector within a period of three months. The book will be returned to the collector along with his portrait. In this case, the form of the portrait will follow the collector’s very personal answers.

Mark Geffriaud invites a group of people into a collective, silent reading of Homer’s “Odyssey”on his wooden structures. Through this individual yet communal experience an invisible sculpture becomes a performance. Conversely, Jiří Kovanda in his piece Frozen Allurement transforms the gesture of a performer into a sculpture.

Roman Ondak often juggles with a certain ambivalence whose unusual framing emphasizes the fragile thresholds which demarcate life from art,and reality from its representation. Tickets, Please was a performance: the ticket-seller was selling tickets for the exhibition with his grandson. The grandson was requesting half the usual entrance fee on the ground floor and his grandfather was collecting the remaining half of the entrance fee on the first floor. The opening hours were according the free-time of the boy. The child redefines the exhibition rules. We are not anymore in the sphere of the representation but already in the real world in an aesthetic we could call «relational».

You, You, Me, You, Me, which is based on a drawing made in 1847 by one of Lucy Skaer’s ancestors, embodies a more romantic vein of a post-conceptual art. The installation is composed of 4 wooden sculptures which surround the pencil drawing of a family portrait of Lucy’s relatives. It was drawn in 1847 by one of her ancestor. Encompassing a ready made process and biographical elements, the drawing refers to a distant past. It will be reproduced on the occasion of a future sale and the original will be given back to the owner, the artist’s mother.

There are also emotions and poetry when Jiří Kovanda asks a woman artist to take a picture of him while she gets naked behind him. The tension of this moment lies on the woman reliance on Jiri Kovanda’s promise not to look back. It is also dealing with the confidence we place in the Other in Ryan Gander’s work. His Alchemy Box, a metaphor of an artwork, only exists through the spectator regard. It is again the Other who will decide in 3007 to open Matthew Buckingham’s capsule in order to reveal its content. May Be Opened After 10 August 3007 delegates the power to the collector. By opening the box and shedding the light on the past he will legitimate the present.

This act of delegation continues with Mark Geffriaud’s work Cyrus. During the time of the exhibition at gb agency, the work will be entrusted to a person working at Murray Guy. Cyrus is an object that has been stolen from the artist Eric Stephany. The artists agreed that it will remain the ownership of Mark Geffriaud as long as Eric doesn’t remember the name of the object. If he achieves to remind it, Mark Geffriaud will give it back to him. The gallery will write down its own story in New York. Symmetrically, gb agency will formulate a word respecting Matthew Buckingham’s protocol as explicited in his work An Alphabet. The person who hosts this work is given the total freedom to compose a word from silkscreened letters reproducing an alphabet invented by the artist’s father. The only rule is that the word must not use the same letter twice. The artist offers to the Other the possibility of creating his work but also to give him a voice. We have written for this exhibition «White Bear» as a reference to the game Dostoïevsky used to play with his brother during his childhood. He asked his brother not to think about a white bear otherwise he would loose (of course, this word was continuously coming to his mind).

Thus, this exhibition only exists within the interstice between the two galleries. In the same way, From an object’s point of view will take place in Murray Guy, New York, from May 12 to June 30 (with works by Mac Adams, Robert Breer, Mark Geffriaud, Jiři Kovanda, Roman Ondak and Pratchaya Phinthong).