Terse, though not without humor, Cupboard and a Play is the title of the new solo exhibition by Lithuanian artist Deimantas Narkevičius. The name links his sculptures to Narkevičius’ most recent film made in 2013. As the artist likes to say, films are an extension of his sculptures since both have something to do with space and movement: just as seeing a sculpture from every angle demonstrates that our understanding of it is fragmentary, watching a film play out produces the illusion. 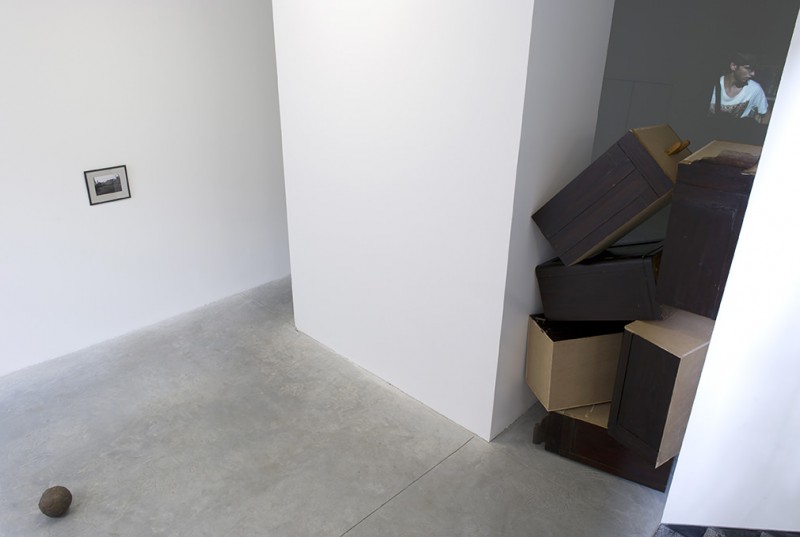 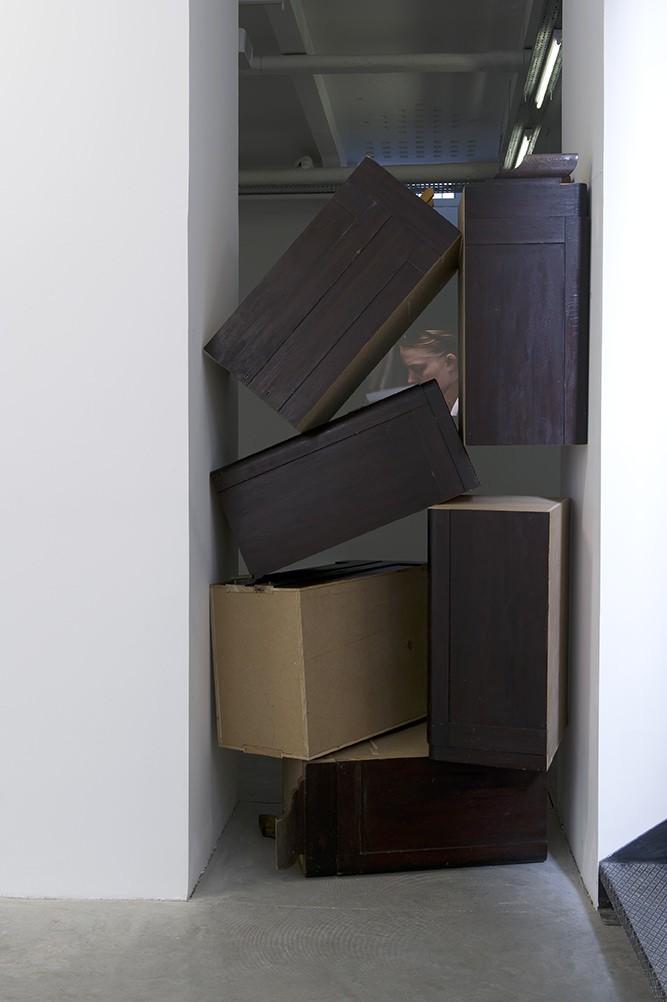 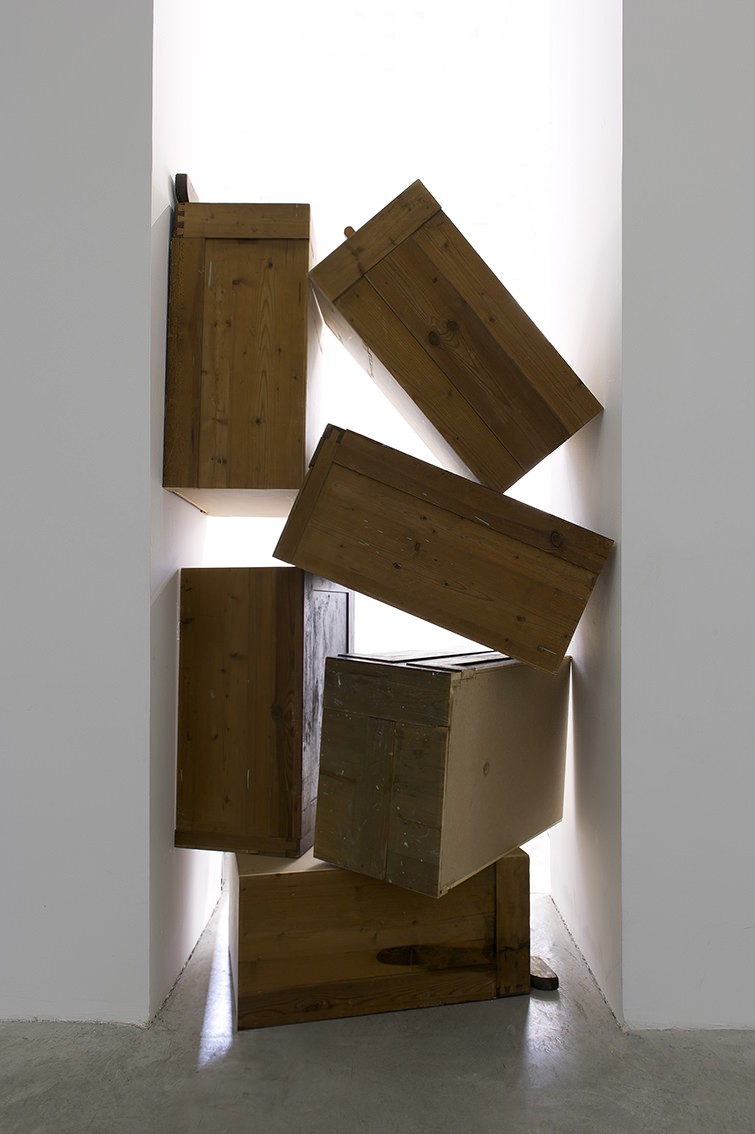 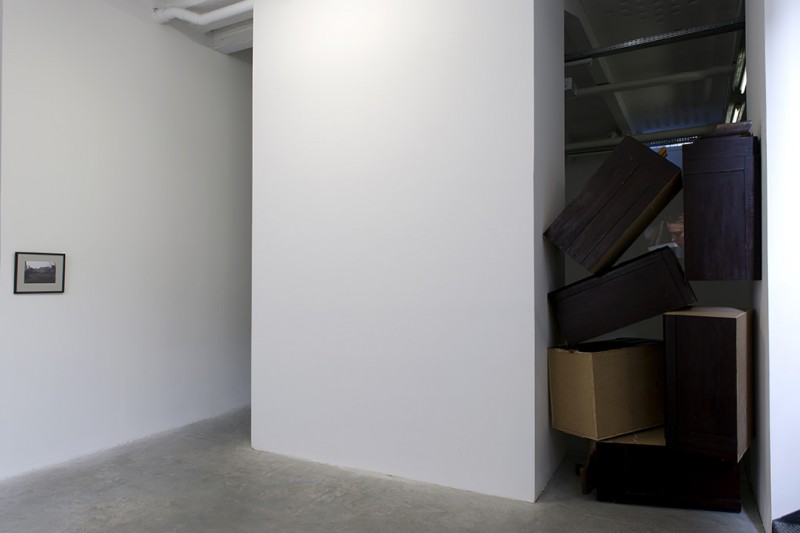 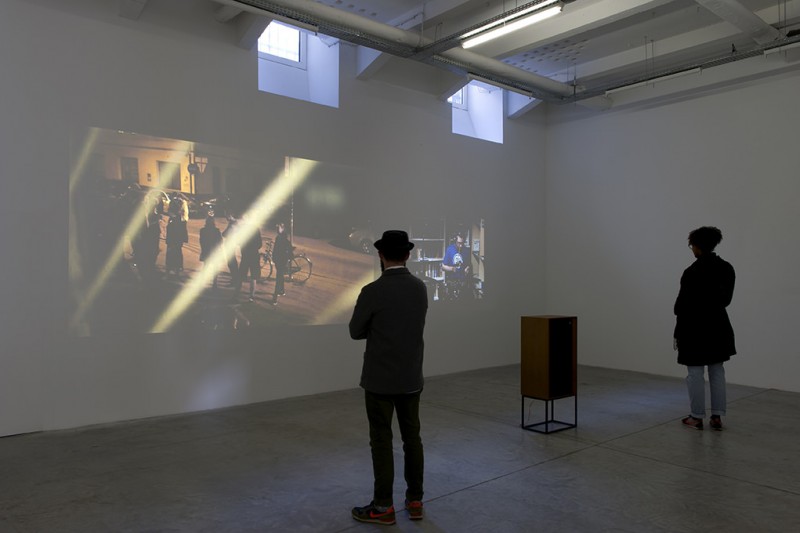 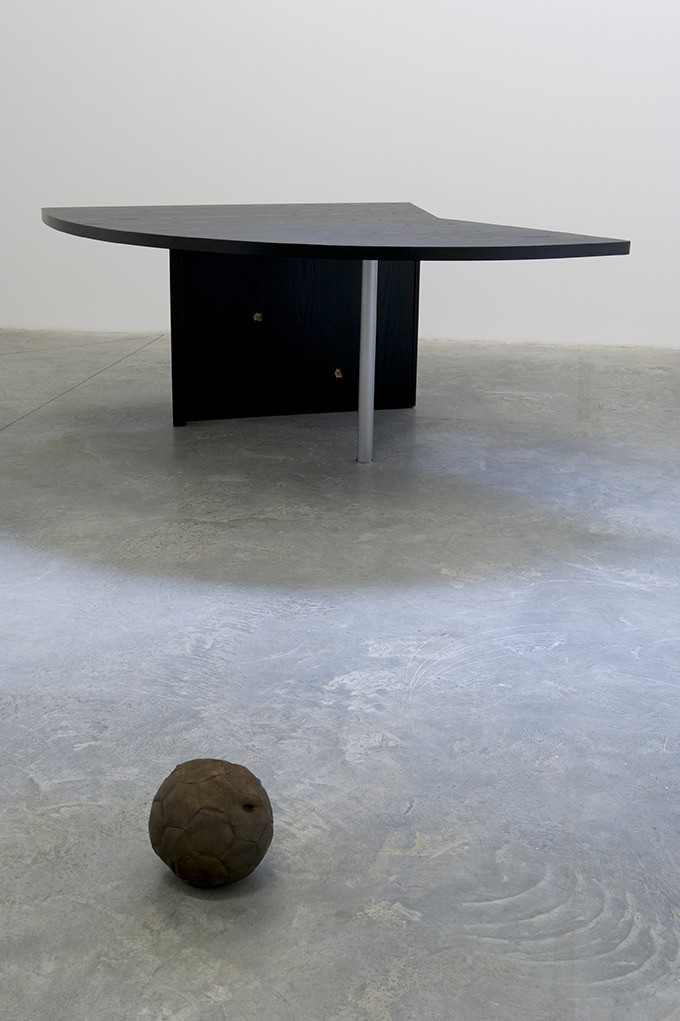 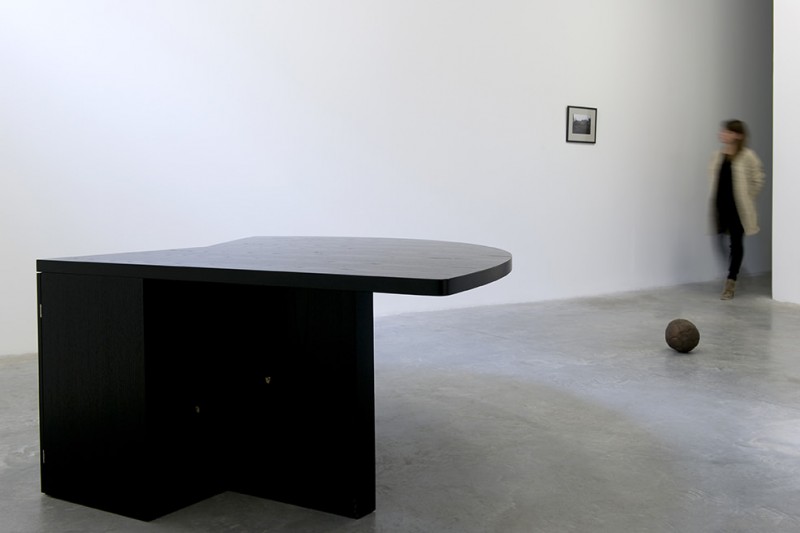 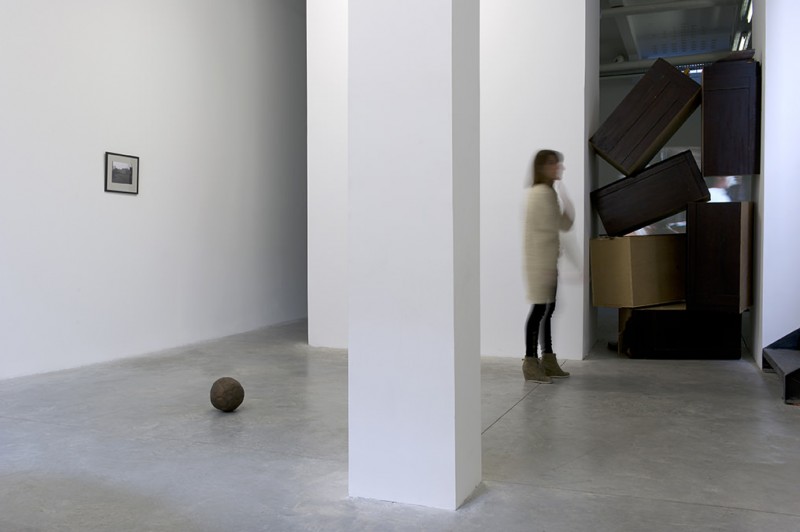 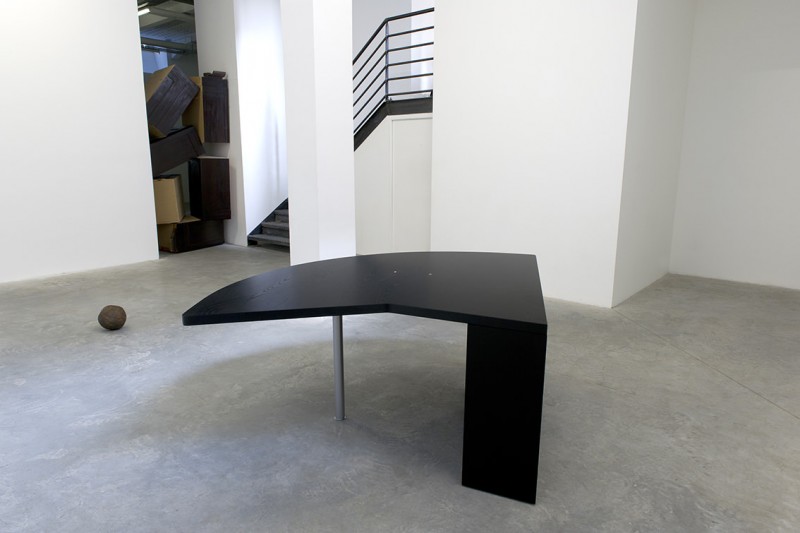 Deimantas Narkevičius deconstructs, he produces ruptures, he juxtaposes; within his work, he conveys dual temporality and different perspectives, whether on film or in three dimensions. Open in Six Parts (1993) is an installation of a post-war armoire made of different sections. The six parts are placed on the floor differently according to the layout of the exhibition, and the object, a transformed ready-made, loses its function and reveals the various layers of its past. With Narkevičius, history is always treated from a living and permeable perspective; his works examine the relationship between memory and evidence, highlighting the different stages of perception. By using the tools or means of the era in question, he assumes an archaeological approach.

The performative sculpture piece, White Revenge (2008), transpires through subjective reconstruction and give and take over time. It consists of an office designed by El Lissitsky in 1930 (the current version was recreated by Tecta) into which Narkevičius had four bullets shot from an old weapon, a Mauser C96. The gun was used after the 1917 Revolution by both White Russians and their enemies. The allure of the original object and its corresponding revolutionary ideology appear well removed from the contemporary version destined for today’s middle class buyers and culture of consumption. And aside from any such observation, while the October Revolution failed, the artist brings the past to life by “performing” it. The events of history thus become material for the artist, subjects to be explored within his purview. If the violence from shooting an object entirely without personality rings hollow, the artist insists it is nonetheless present, though not necessarily where one expects. With such an act, the question remains unanswered. Other times, history is associated with a more personal experience, as with the sculpture Game No.1 (1995) refering to the soccer ball is rendered in bronze. Each segment of the ball has been casted with different parts of the artist’s torso. Through personal body, Deimantas revives the collective memory of the viewer.To this group, the artist wishes to add a souvenir from the 2002 film called Kaimietis, from which he claims a single image and produces a print from its original 16 mm format.

The new work by Deimantas Narkevičius, Books on Shelves and Without Letters (2013) -which has been conceived for his solo show Da Capo at MAGASIN, Grenoble - is a two-channel video installation. It shows forty minutes of a concert in a bookstore called Keista in Vilnius by the young group ‘Without Letters’. The recording is reminiscent of music videos of the 80s with its atmospherics, optical back and forth and amplified camera moves. The artist doesn’t hide the spontaneous movements of both cameras. Playing with time, the grain of the video and aesthetics of the location even take us back to the beginning of video clips on TV, as if this band was already visible in that media. Certain pages from books that the audience reads during the concert occasionally appear and highlight the gaps in time.

Books on Shelves and Without Letters is the continuation of a fictional band tour created by the artist and begun three years ago with the showing of his film Ausgeträumt (2010). In that film, the artist offers to produce a video of the Lithuanian musicians’ first single. This visual transcription turned into the piece, and also became a way to introduce their music in artistic communities. Deimantas Narkevičius builds on this association to produce a new dynamic. This time the group ‘Without Letters’ truly appears to be the main character in the film.

Books on Shelves and Without Letters is an installation video that exists autonomously, with its own developments in the artistic space as much as in the musical one, and is evidence of Deimantas Narkevičius capacity to invent still new formats.