gb agency is proud to present Activity of Matter, a group exhibition including works of varying media, including an unpublished vintage photo from 1974 by artist Mac Adams.

The exhibition takes its title from the work by Julius Koller Time/Space Definition of the Psychophysical Activity of Matter, a diptych of photographs in which Koller can be seen retracing the lines of a tennis eld, a gesture that seems to acknowledge the artist’s will of participating in a game, one which has to be, nonetheless, radically revisited by the artist himself before he can engage with it.The work marks the tone of the exhibition, divided in three conceptual axis but linked together through the sound installation Il y a, ensuite by Dominique Petitgand, which acts as a sonic leitmotif throughout the gallery’s ample spaces. 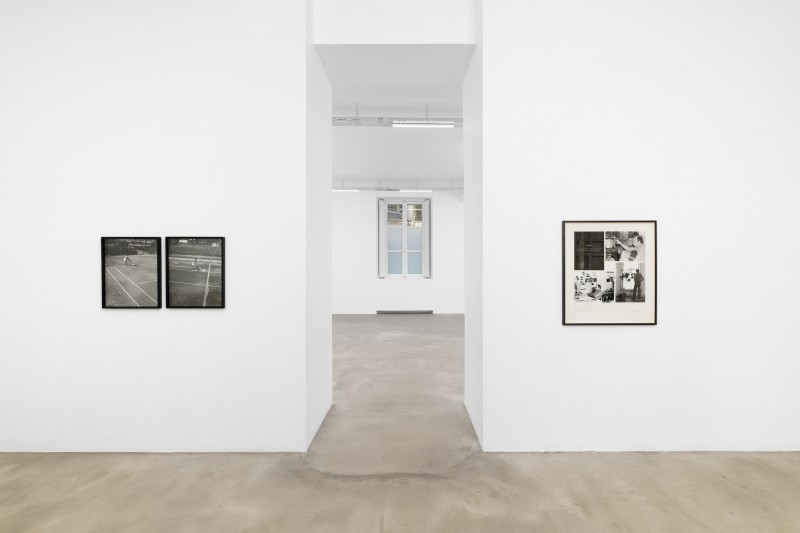 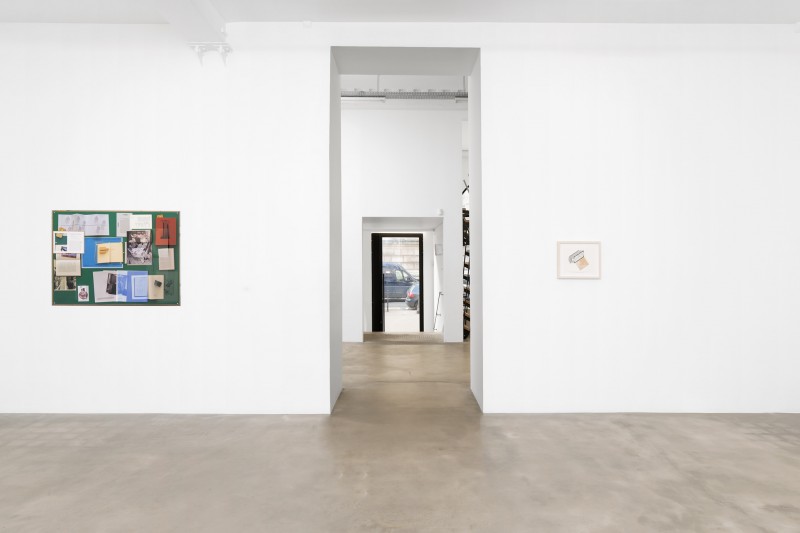 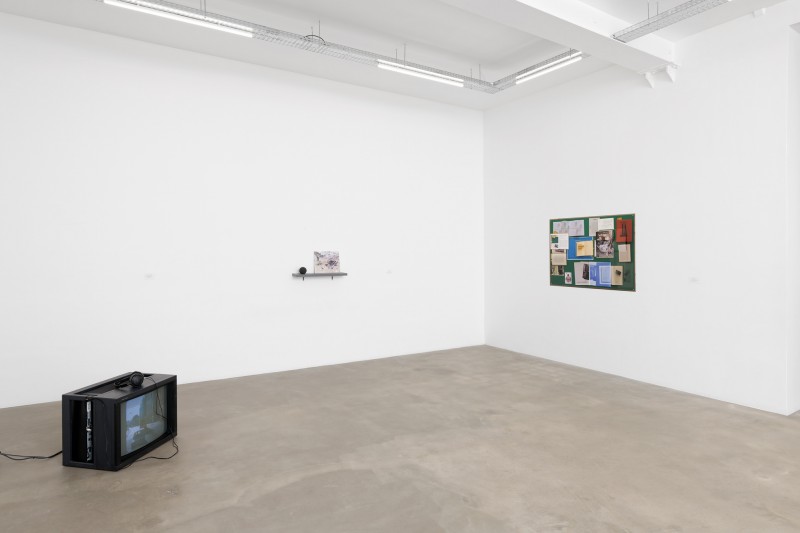 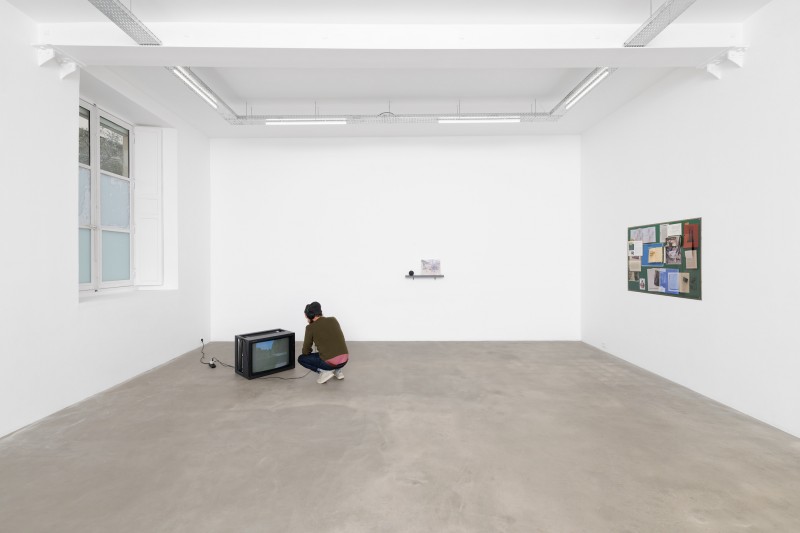 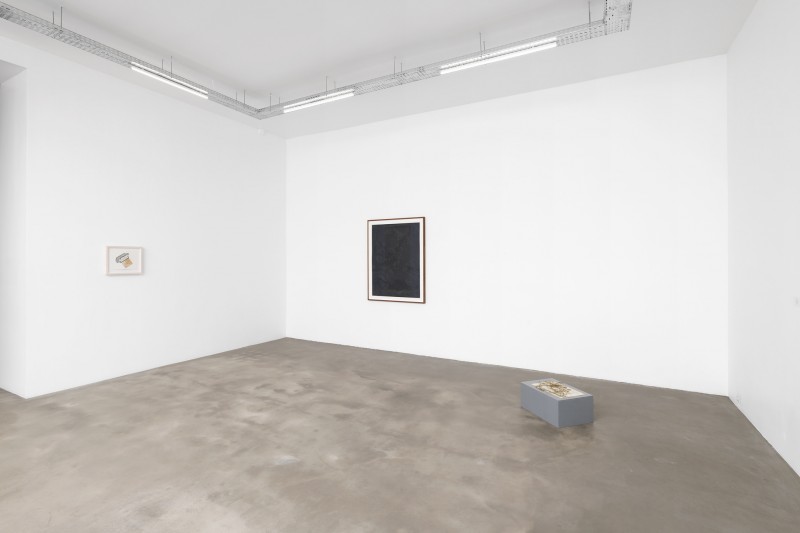 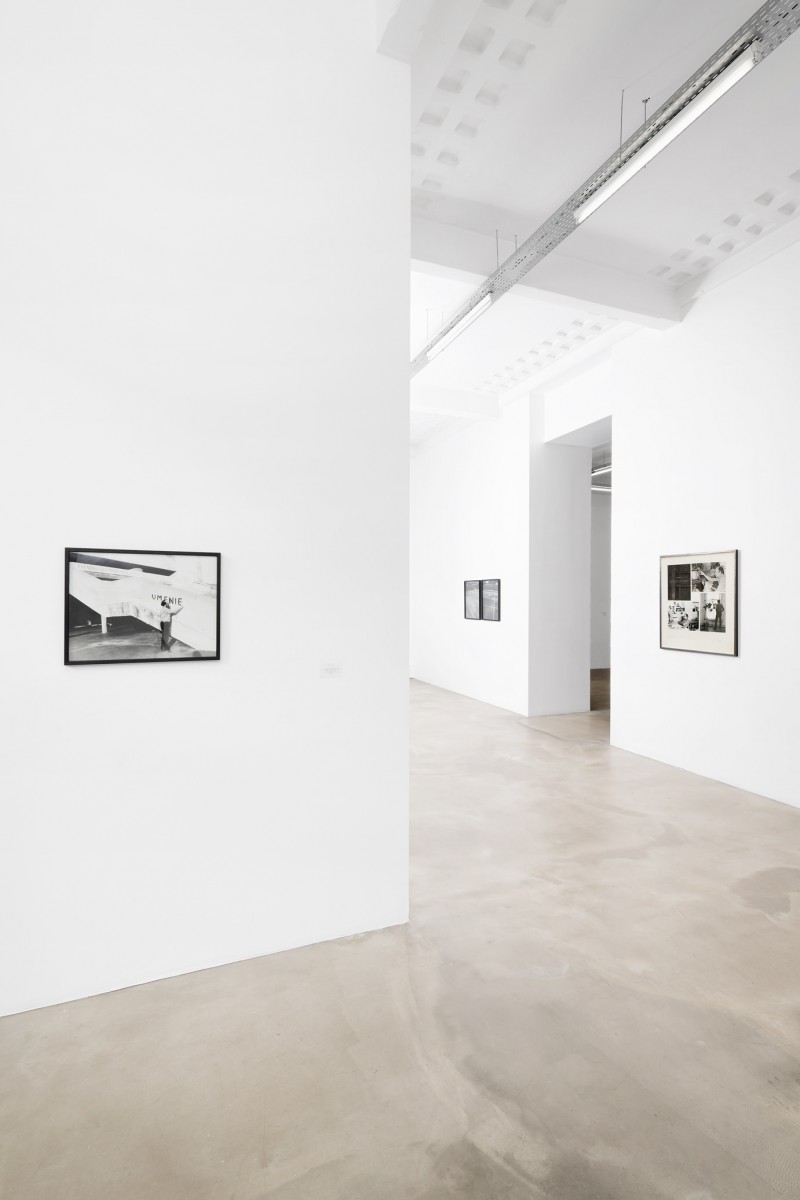 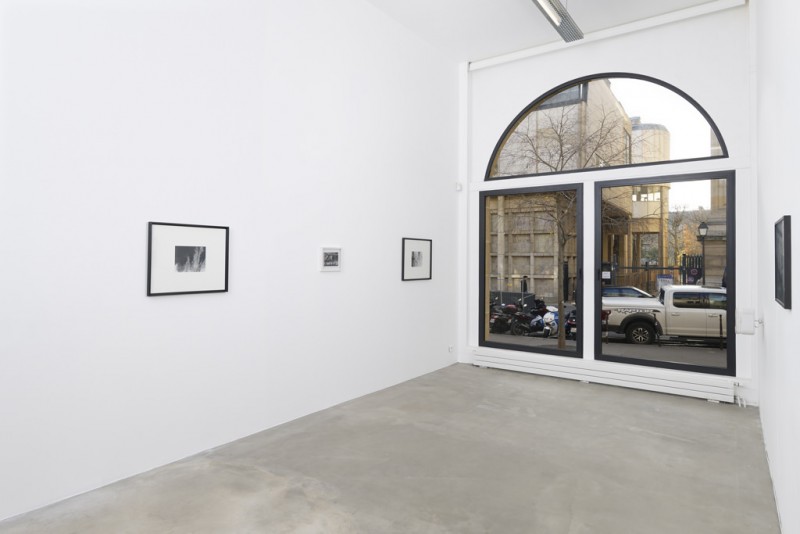 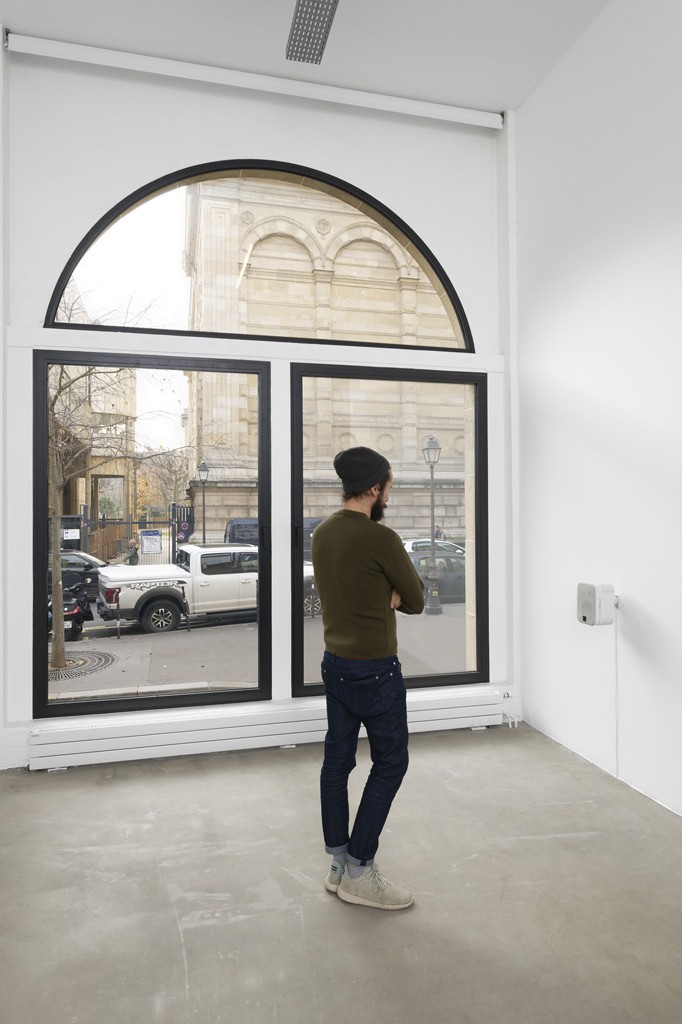 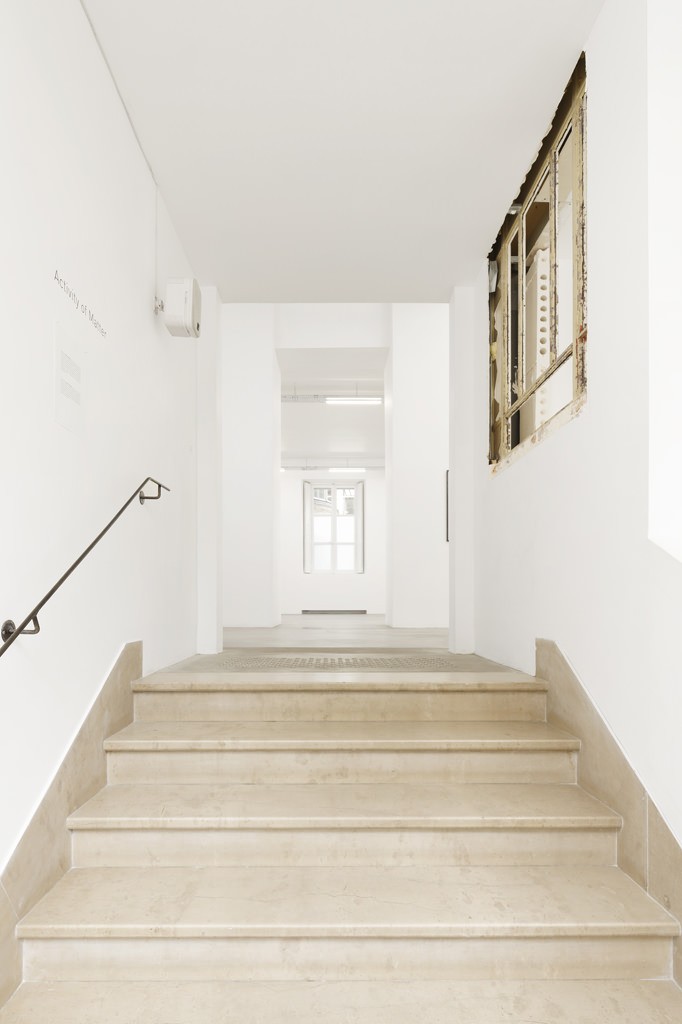 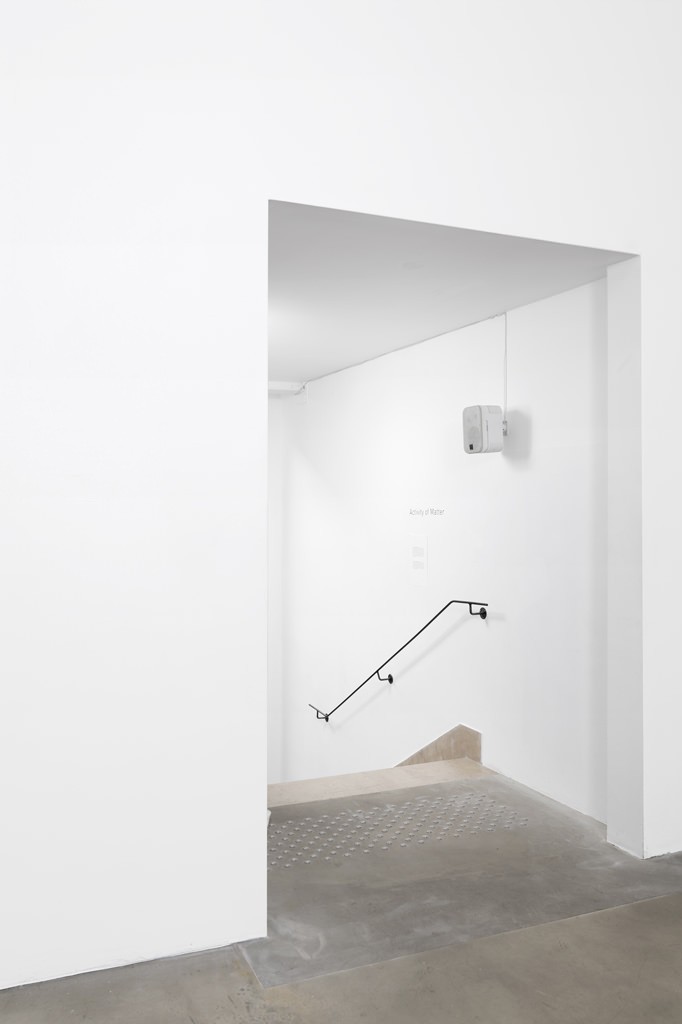 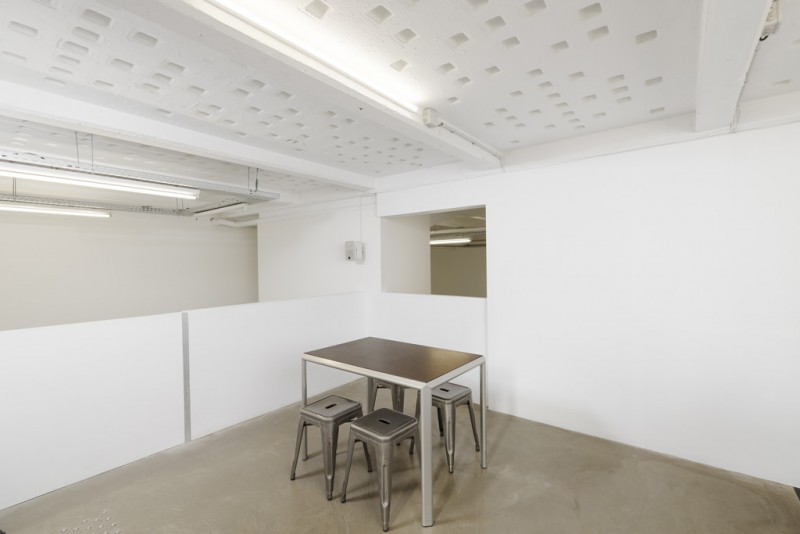 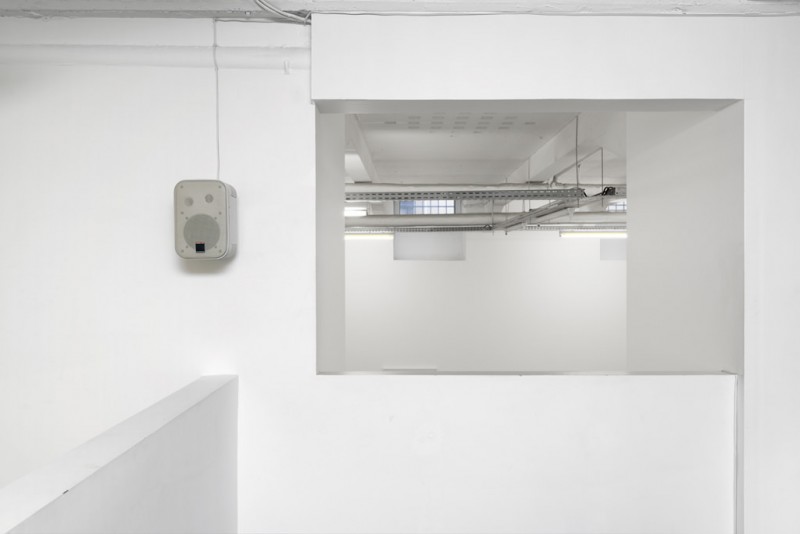 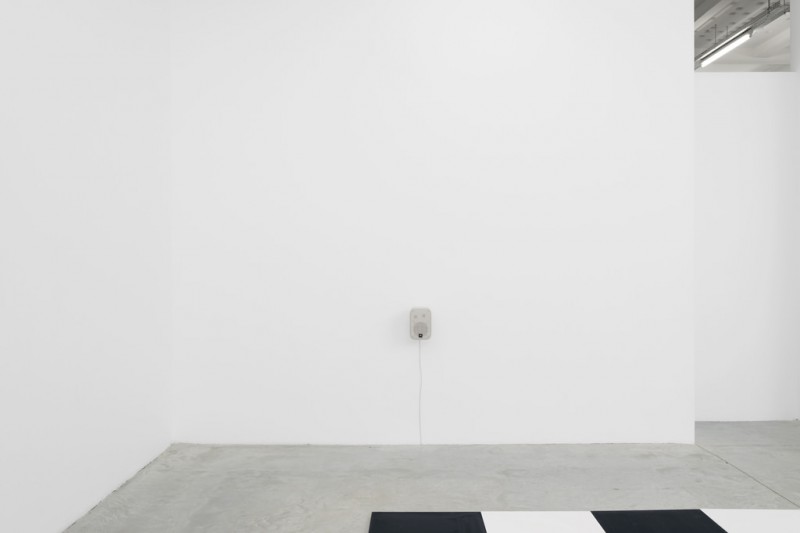 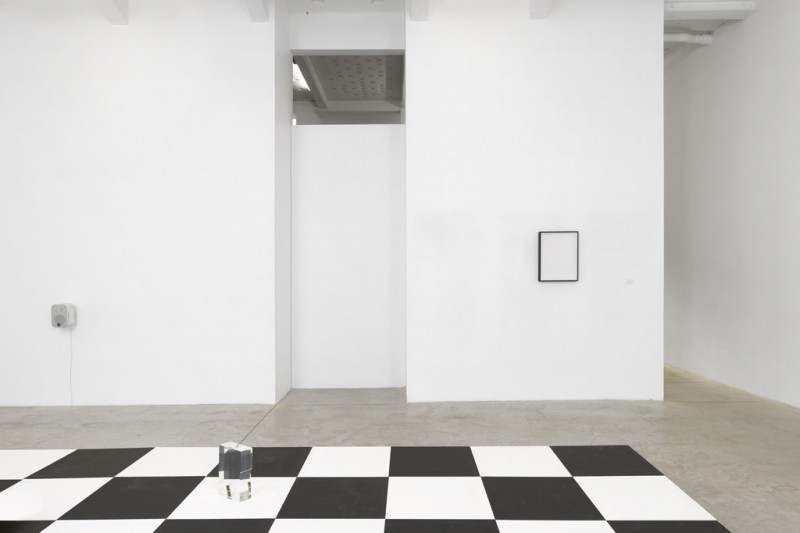 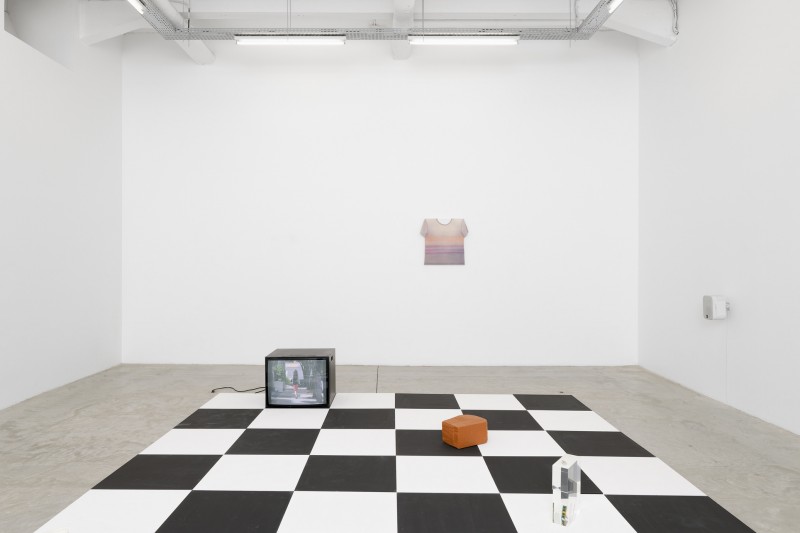 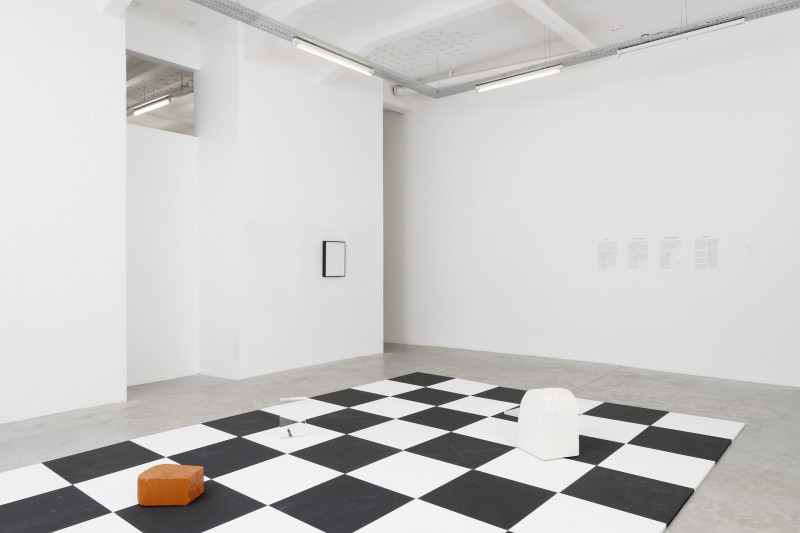 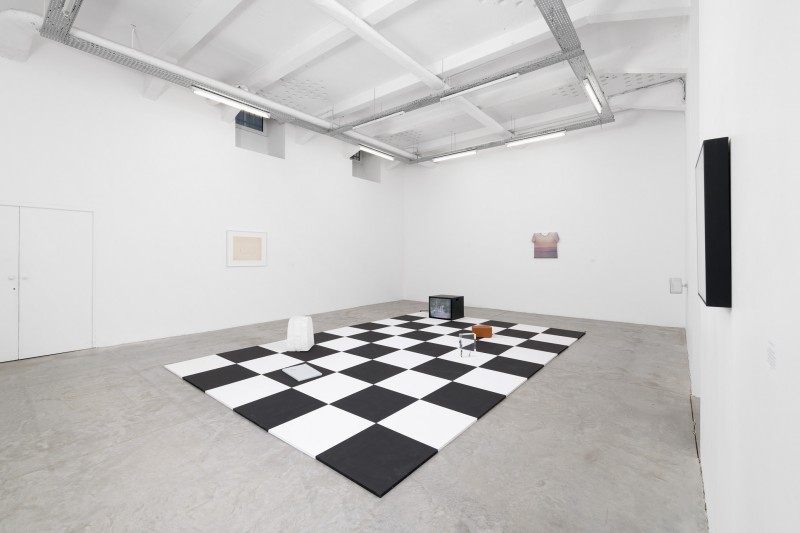 Next to Julius Koller’s work and flanking the first gallery, hangs Mac Adam’s The Predicament, a montage on cardboard of four vintage photographs done in 1974.The work presents a page in black announcing the artist predicament on white letters: “Sometimes I have no art ideas I can identify with… then I generally wander around feeling a certain despondency and embarrassment” followed by images of Adams sitting down in front of his desk, facing a window and aloofly looking for something on TV. In the work, the artist modestly acknowledges doubt but most importantly, he notes the existence and texture of those moments of doubt as a defined field and state of mind, a moment that is indeed at the core of the artistic practice from which his later work springs.

Inside the first exhibition room, the viewer encounters works in which artists have defined their field of action with reference to science, geopolitics, and even institutional territories. In Loop, a drawing done by Roman Ondak for his transformation of the Czechoslovakian pavilion at the Venice Biennale in 2009, the artist presents the heavily signified building -a political relic of Europe after IWW- turned on its side, with its floor opened as a flap showing a map of Europe covered by different grids.The artist chooses to tackle his artistic endeavour by entering the field of geo-politics and turn it upside down, only to find in its interior a rich mix of tangible reality, politics and many subjectivities that acted as his raw material.

On a nearby monitor, Deimantas Narkevicius’ video Europa transports the viewer to an apparently mundane journey that takes the artist on a car-drive from the exterior of a council state, his home at the time in the Lithuanian city of Vilnius, to a stone on a nearby forest marked as the geographical center of Europe. The underwhelming journey represents an ironical take on the identity of the European Union, one that in its outset didn’t considered countries from the East —including the country at the center of the continent—as worthy of membership. Who has the power to define the territory and what importance does the actual land has when at interplay with political subjectivities and political power?

These questions find an echo in the works placed nearby of Pratchaya Phinthong and Pia Ronicke. Ecological catastrophe and its co-relation to precise socio-political events is at play at Ronicke’s Le Monde FRIDAY, Mardi 29 Juillet, 1952. Lathyrus sativus, in which the artist pairs a newspaper from 1952 to the moment in which a plant and its seeds entered the Svalbard Global Seed Vault in Norway in order to be saved from extinction. On the other hand, Phinthong’s work One of Them pairs a sculpted sphere of Yttrium, one of the rarest and most expensive minerals on earth, to a satellite image updated every-few days of the most significant and ever-growing mine of this mineral, located in China.

Minerals themselves and microscopic traces of life and geological history are the chosen territory of Dove Allouche, whose work Spore_8 acts as a reminder that what lays beyond our vision, and apparently at insignificant relationship of scale to the world’s attention-grabbing current events, is a rich source of visual wonder and precise scientific history able to take our mind to times and places otherwise hardly imaginable.

As if facetiously commenting on all its surrounding peers, one of Július Koller’s Conceptual Cultural Situations presents a mountain showing on its flank the mark of the artist’s preferred territory: a gigantic question mark.

Elina Brotherus’ video Nu montant un escalator after Marcel Duchamp’s Nude descendant un escalier welcomes the viewer to the lower ground, where the scope of the exhibition has shifted to examine works in which artists take a stand in relationship to space vis à vis the intimate relationships they establish with it, whereas defined by references to the history of conceptual art in the case of Brotherus, or to the body and its inner organs, as in the work of Cally Spooner.

In the middle of the exhibition room, we find Yann Sérandour’s Dance Floor, in which the exhibition space has transformed into a work of art that is, in turn, a space welcoming the arrival of other works that dance upon its black and white slabs. On top of Dance Floor, we encounter a motorised sculpture by Robert Breer (Tucson #1) that seems to have escaped the two-dimensional format of an untitled drawing also by Breer that hangs on a nearby wall.

Facing this Float stands a work by Mark Geffriaud, 2004, in which space and time have materialised in an inclusion of arranged objects inside a block of plexiglass. As if presenting a slice of the artist’s life in the studio, the work plays with the notion of the unattainable or the illusion of accessibility, given that one of the objects now locked forever inside the plexiglass is a RAM chip, a unit of digital memory, paired with an analog unit of memory in the form of a used metro ticket.

Bringing to mind notions of circulation and the city as a territory that acts as an —not empty- but over saturated canvas for artists, is Roman Ondak’s video Insiders, in which we see seven women walking on the vertiginous streets of San Francisco, wearing their t-shirts inside out as if creating with their steps a secret map we never get to follow. On the adjacent wall, Yann Sérandour’s Dated Painting presents a dream landscape in the form of a used t-shirt.

Rounding up the exhibition is Cally Spooner’s work Notes on Humiliation in which fiction, humour and psychiatric facts mingle in the universe created by Spooner in order to explore the nature of our high performance economies and its relationship to feelings of shame. Both intimate and sensual, the work acts as an end that refuses to draw conclusions, instead producing questions about the inexhaustible capacity of artists to find the real in the fictional, the unknown or the non-existent.