Ajar, the title of the fourth exhibition by Roman Ondak at gb agency, refers to a partly open door, to the idea of a space that is enclosed yet still accessible, to a moment in transition, a moment of transmission. Here is an instance where the private meets the public, where the individual encounters the group. And this betweenness carries on across time throughout the exhibition with works created in either the 1990s or made for this show. Ajar has been built on a back and forth through time between a memory and the present. Ondak often creates such transitional spaces, readjustments within a system of vis-a-vis, sometimes in symmetry and sometimes in discord, where art borrows from life and life takes on an aesthetic form, becoming an artistic moment. 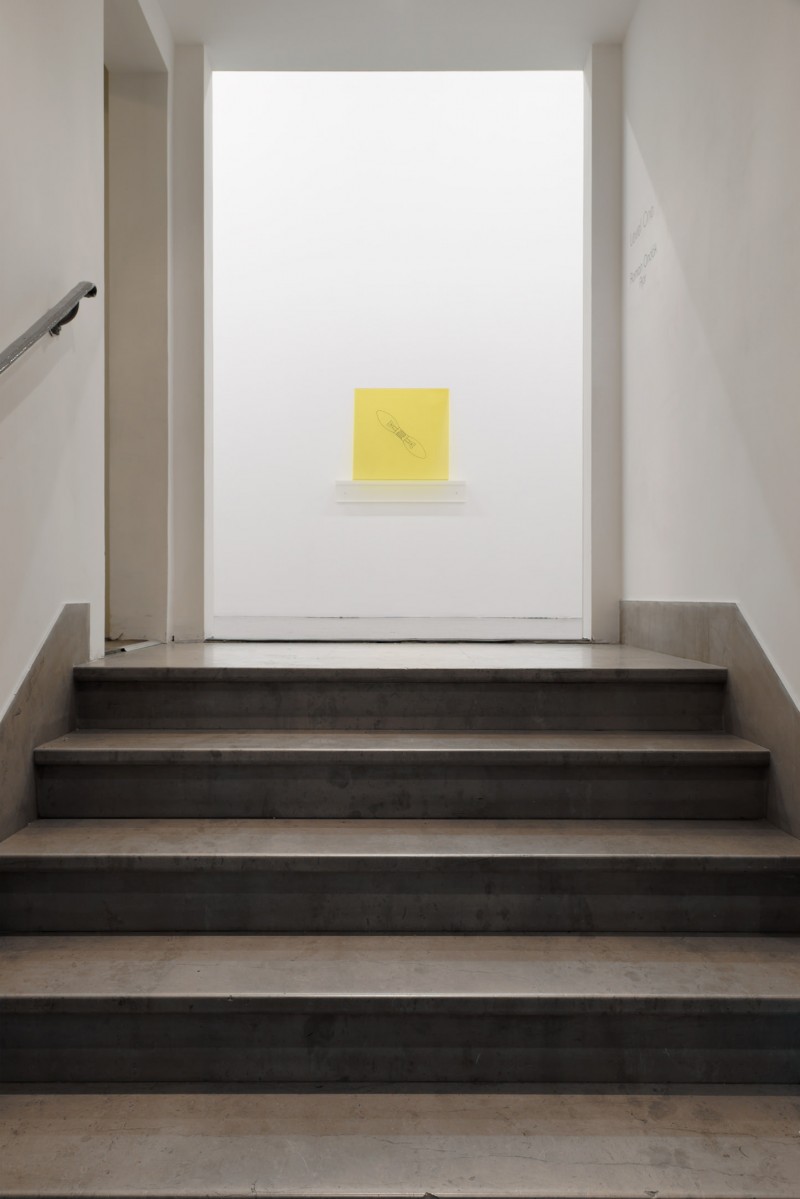 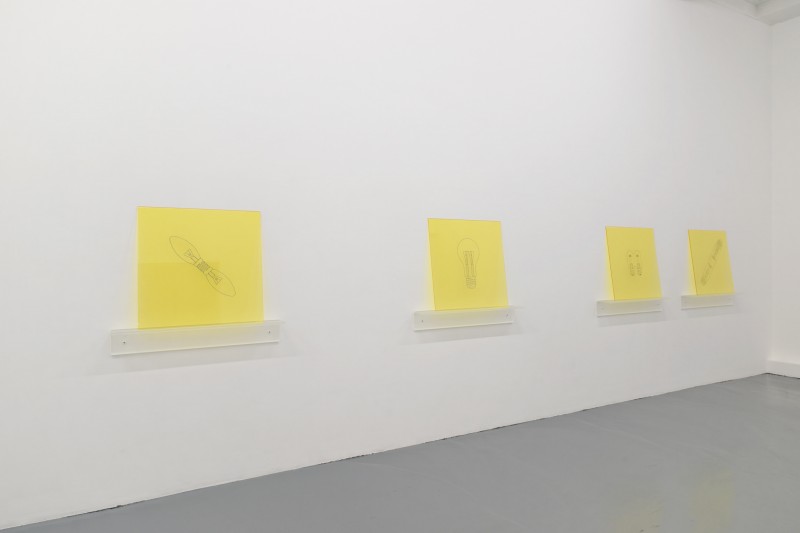 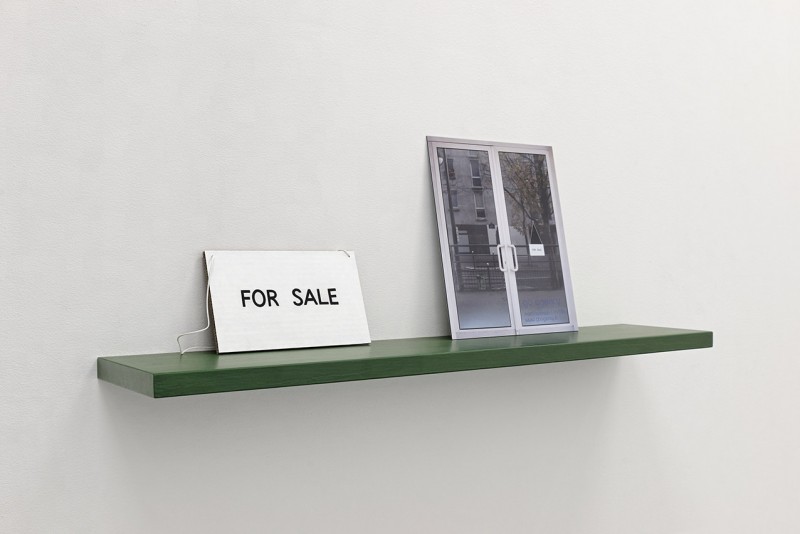 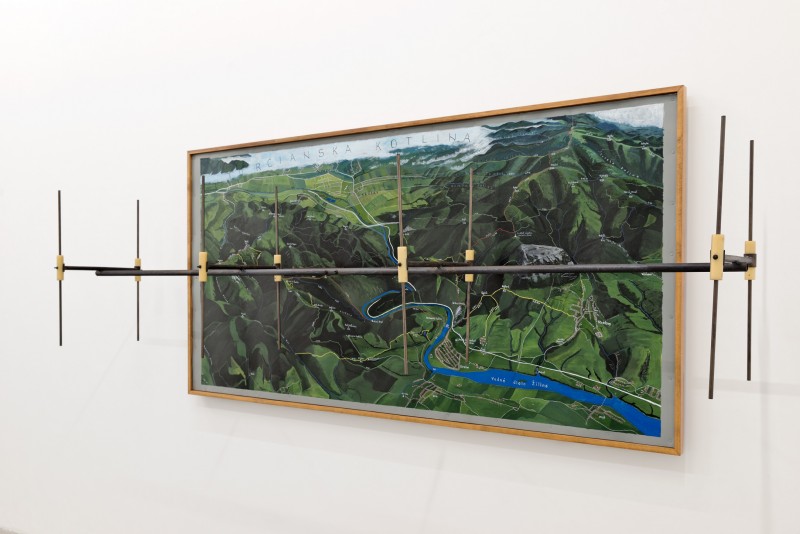 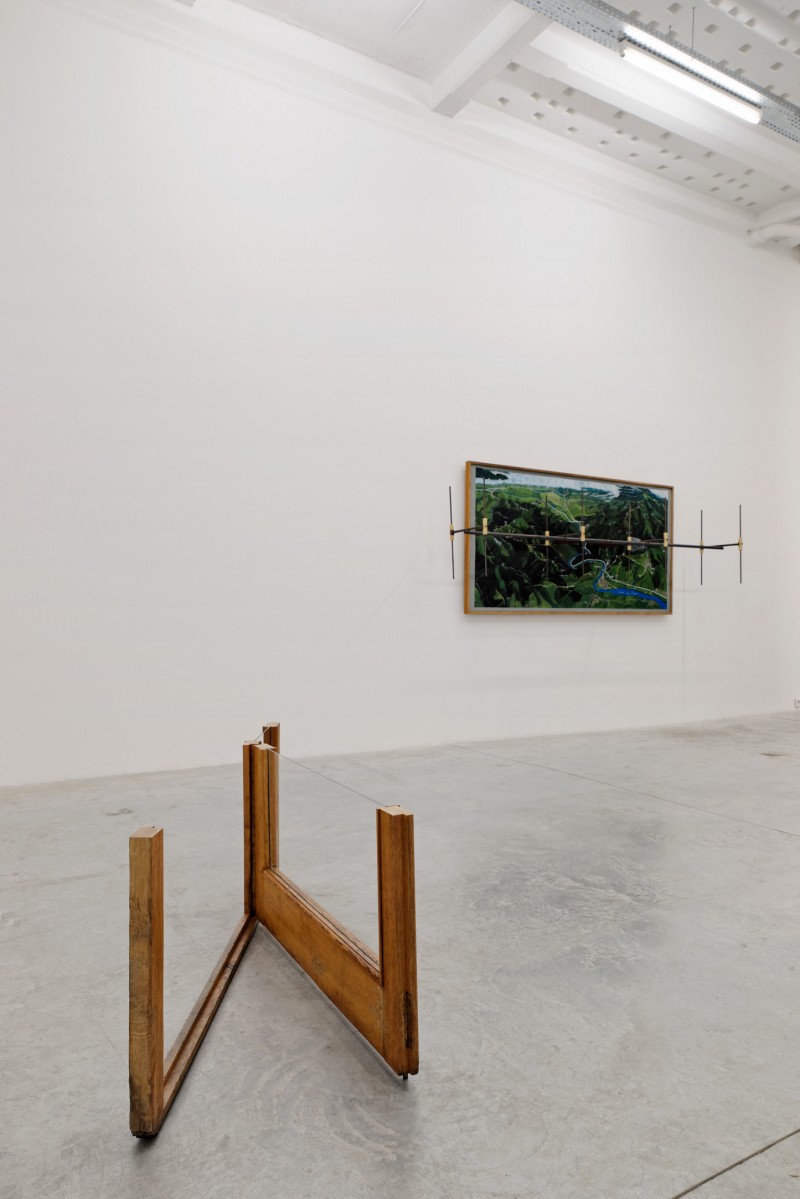 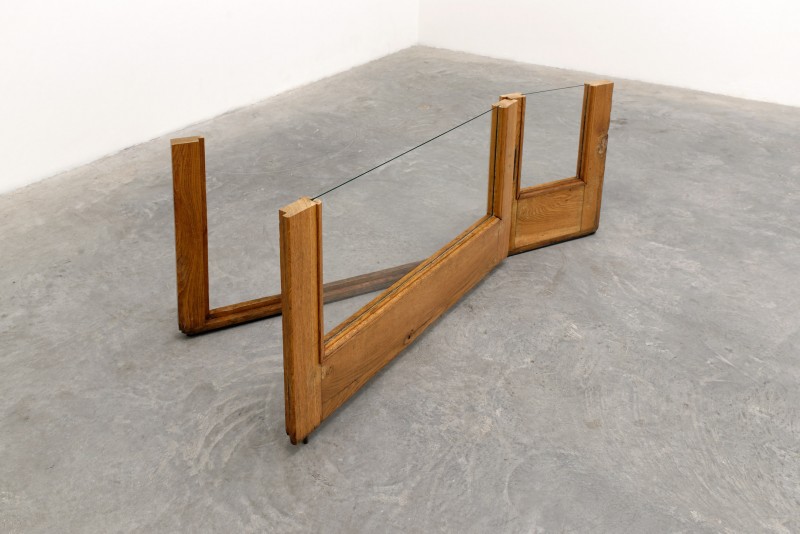 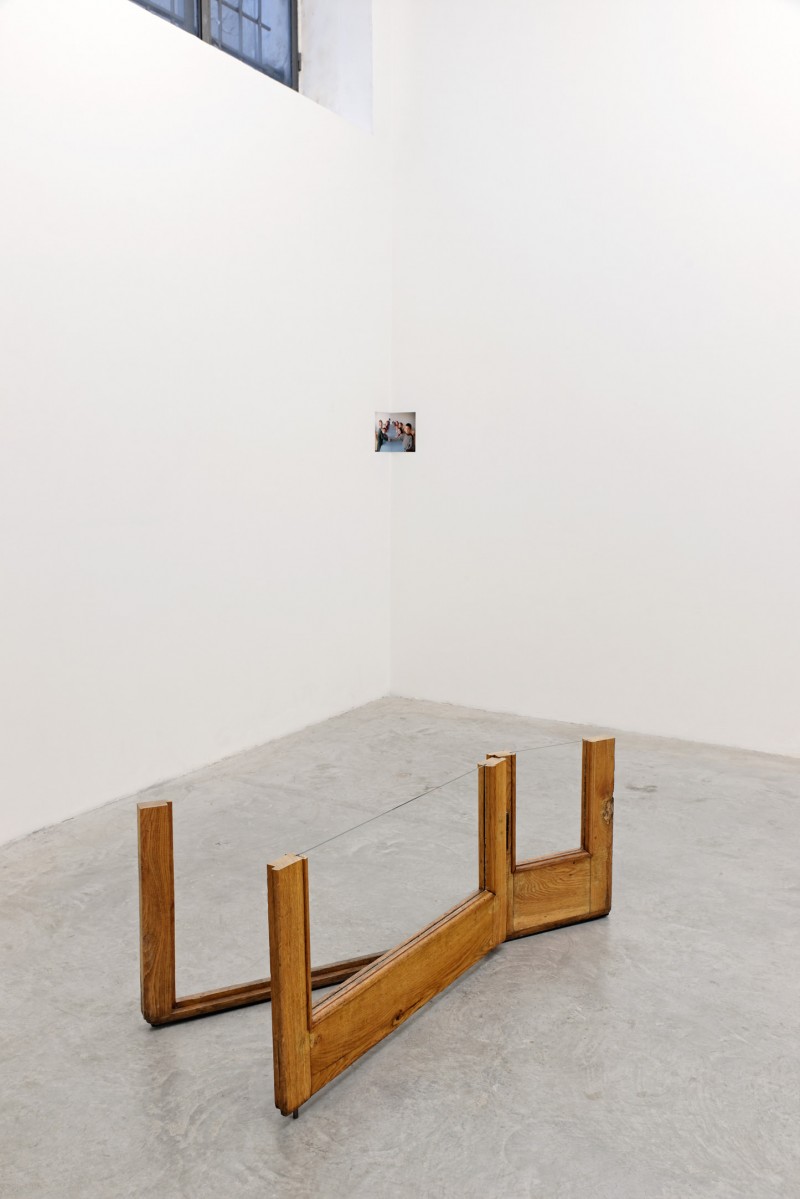 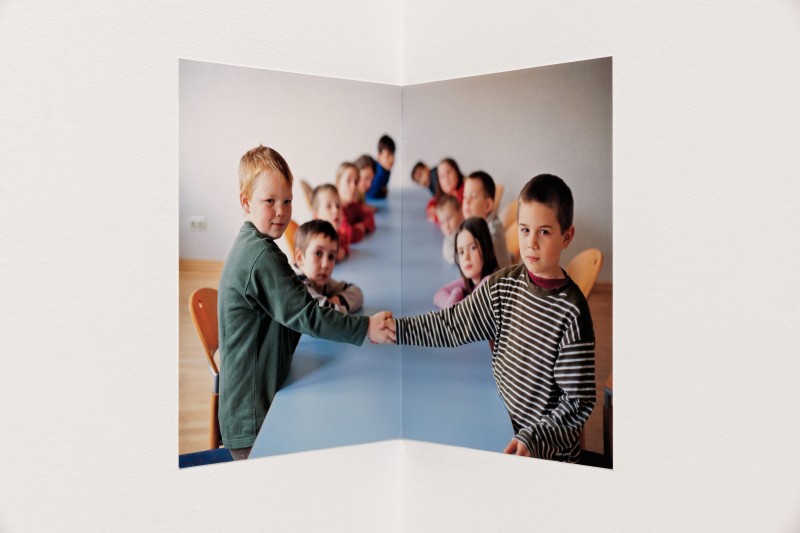 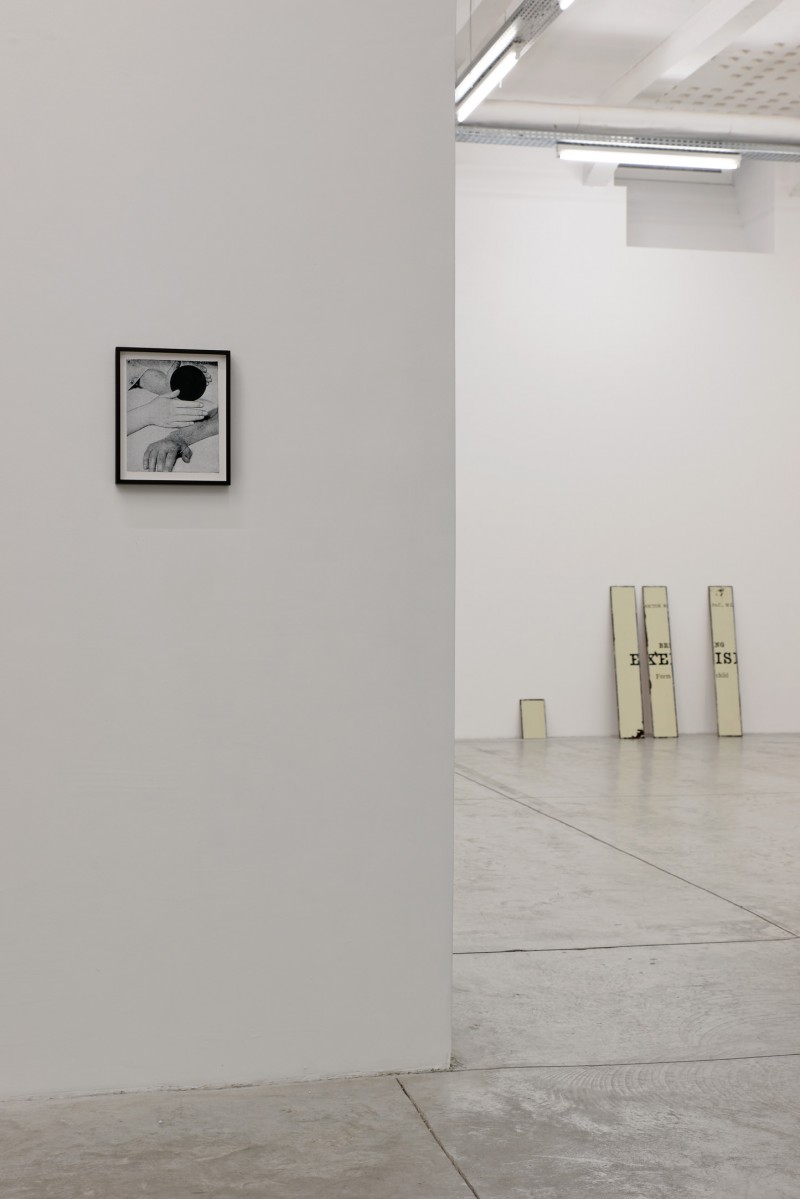 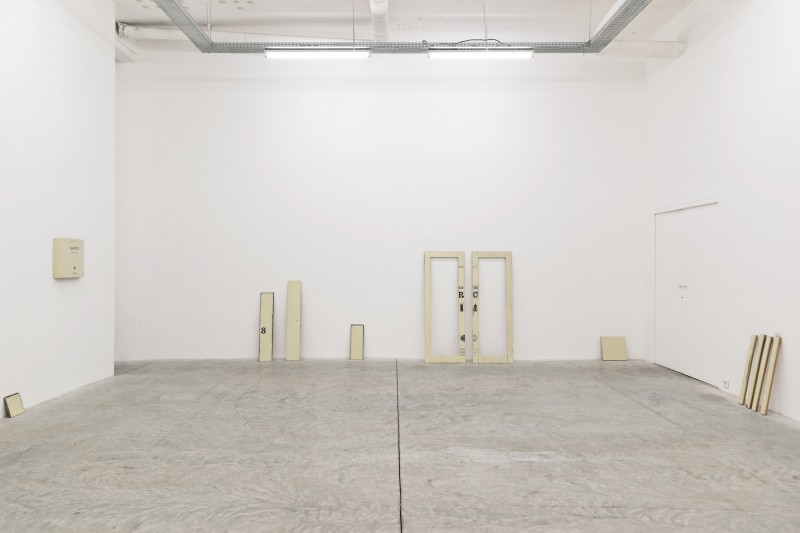 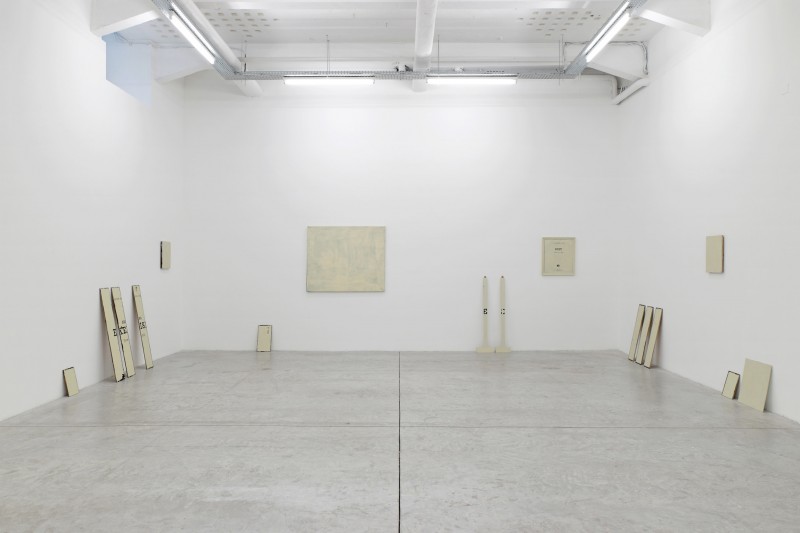 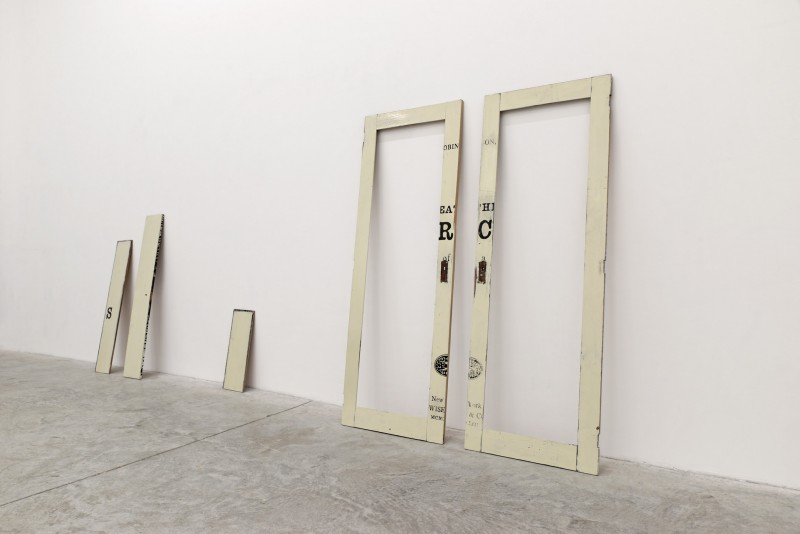 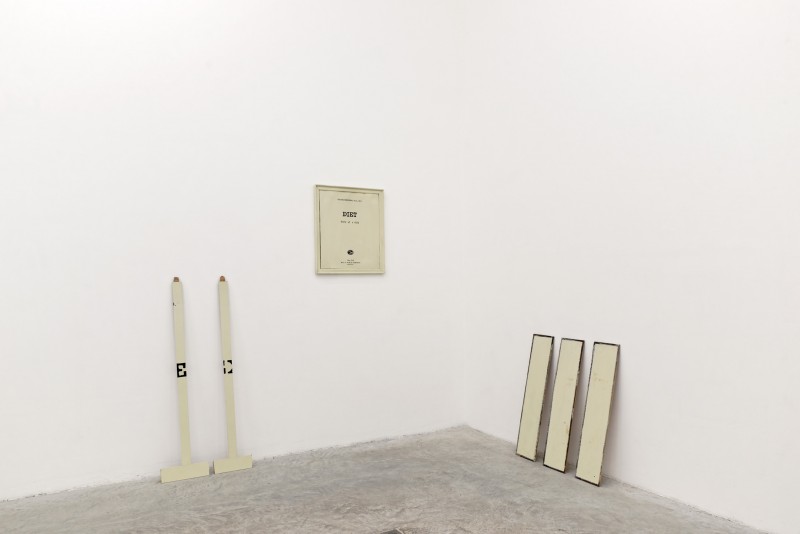 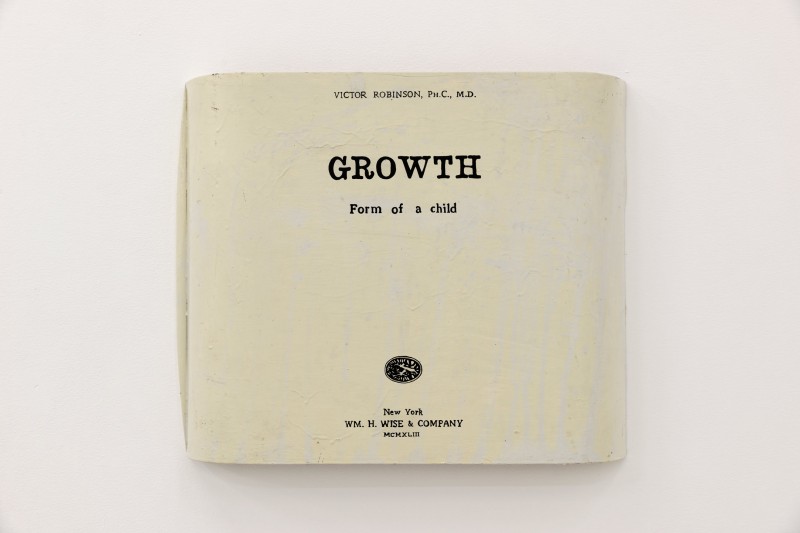 Door Left Ajar (2014), once being a part of the house of the artist in Bratislava, is a wood and glass door and doorframe that has been cut down. Removed from its original context, the piece symbolizes this half-open accessible space, between indoors and outside, and highlighting the delicate boundaries to the life of art. The act of selecting and preserving autobiographical items is found also in the piece entitled Mailbox (2014), a plank of wood from a drawing table taken from the artist’s studio into which a map of Central Czechoslovakia has been inserted, developing a sort of reconnaissance of Ondak’s homeland. He then superimposed en relief a mailbox made from part of a pipe. The mailbox was made by Ondak’s father from a drainpipe - part of a routine in Slovakia in the 1980s when everyday objects were transformed for other uses. The use of familiar and transformed objects into art defines the geographic, familial and private universe of the artist. In addition to the geography and origin of the artist, it also underlines notions of exchange, communication, and an openness to a world beyond local roots.

The contours of the exhibition combine the person with other more geopolitical worlds. The mailbox in Mailbox or the antenna in Antenna (2014), weren’t chosen randomly but rather as means for broadcast and distribution in a time when it was difficult to communicate. Antenna is an assemblage that is part geographic portrait and part life-sized object: a large antenna made by the artist’s father in the 1970s and a found hand-painted landscape map of the pathways in the mountains near Zilina, where the artist grew up. If Mailbox offers an overhead and cartographic image - an abstract of the territory - Antenna is in a much more human scale, empirical and almost naïve in form, the painting is in fact so precise, that it is possible to find there the family house of the artist.

This relationship with others runs through all the works of the exhibition, as in the drawings Three Hands, One Broken (1993) and Hand with Bandage (1993), which appear along the way. Based on medical textbooks, the artist selected and framed individual illustrations, showing sets of hands caring for others. Working from enlarged and pixelated prints on paper, he drew onto each gesture a circle in India ink. Ondak is partial to the idea of humanist transmission, from one person to the next via simple action. The textbook transfers knowledge and the drawings transform that knowledge by finding its poetic equivalent. The drawings reframe an action and the act of layering on the black circle reveals other more abstract layers.

And again, a focus on the other in the installation Form of a Child (1994/2014), which refers to the encyclopedia ‘The Modern Home Physician’ by Victor Robinson, a collection that was popular in the US in the 1940s and found in nearly every home. Ondak first projected, then hand painted onto various pieces of furniture the chapter titles having to do with raise of children. The installation was over the years almost forgotten, thus partially lost or destructed, and now re-discovered and appropriated in its present state by the artist and shown piecemeal in one area of the exhibition. The painted furniture acts as a substitute, a metaphor for the human experience at both its most intimate and also more everyday moments.

Tomorrows (Handshake) (2002) is another transmission, this time on a broader scale, referring to socio-polical moments in history. The installation portrays children shaking hands in a meeting. The piece was created at a school in Erlauf, a small Austrian town. In the photo, which is bent to fit into the corner of a wall where it is shown, the recurrent elements of the artist’s work are present: the simulation of a real event is staged to reenact the situation; by reframing a moment from the past, Ondak investigates how a new generation perceives the past, and explores the present of the viewer. Tomorrows (Handshake) is an anti-monument to a non-event, an unspectacular moment, nearly insignificant, yet a witness to the permeability between art and reality.

The installation of four screen prints on Plexiglas portraying vials, entitled Twin Bulbs (1993), already includes the notion of doubles, and the mirror symmetry that the artist will further explore in other works. The nearly technical drawings look like complex yet synthetic forms of vessels, sending the invisible information they contain into the future.

The notion of duality comes full circle and the loop is closed with the installation For Sale (2007), containing a photograph and a sign placed on a shelf. The photo is of the entrance to gb agency when it was still located on the rue Louise Weiss in the 13th arrondissement in Paris. Hanging from the glass a sign reads ‘For Sale’ and the same sign is placed on the shelf. The piece For Sale is a reminder that for the artist, the action is inside art institutions, galleries, or museums. An exhibition space becomes a public space where the viewer has a role. And also, the art institution is a microcosm of society, a place to meet and exchange. An exhibition is a place for understanding and transformation, a passageway, a place for traffic, assembly and dissemination. Behind the apparent normalcy of things and lives, the artist delves into the collective memory by exploring the customs and meaning systems that almost imperceptibly influence society. All of the work of Roman Ondak is based on the readjustment and reframing of a reality fitted into the artistic space.

Roman Ondak was born in Žilina, Slovakia, in 1966, he lives and works in Bratislava.