The idea of this exhibition started with a coincidence: the simultaneity of an exhibition of Hassan Sharif with a new project by Jiří Kovanda. Very soon, the parallel between the performances realized by Hassan Sharif in the desert of Hatta and the actions of Jiří Kovanda in Prague became clear; this proximity between the two universes questioned how art has simultaneously grown up at the fringes and at the center and so emphasized the way we look at and legitimate an artistic practice. If Hassan Sharif and Jiří Kovanda were aware of some influences, their geopolitical context has given to their work its peculiarity. 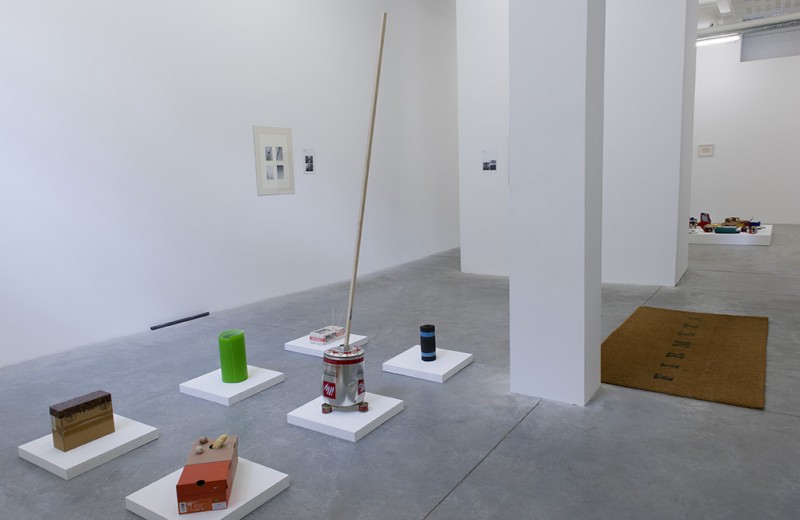 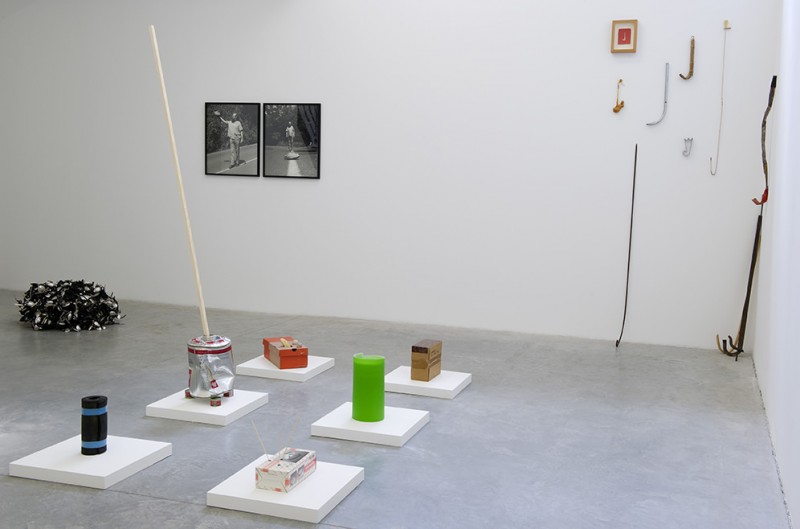 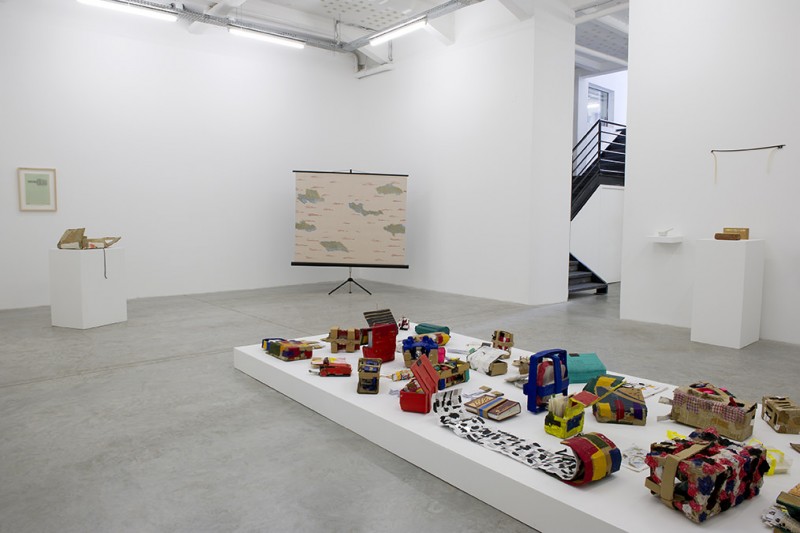 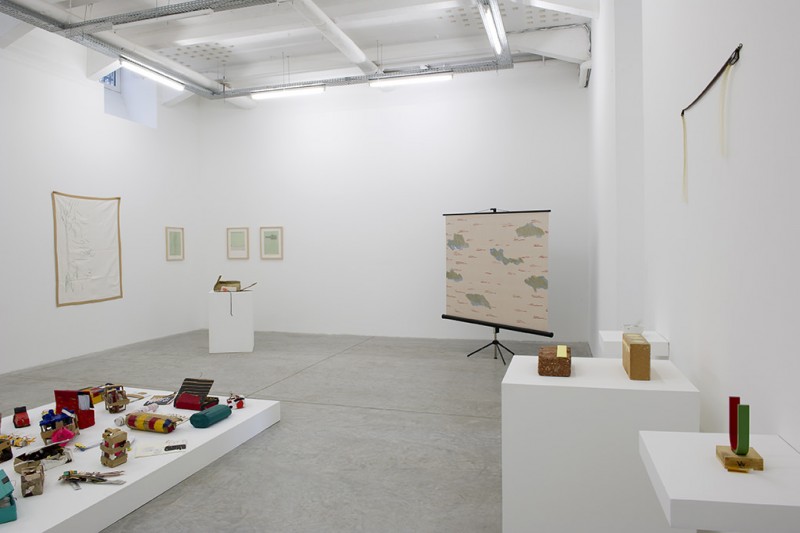 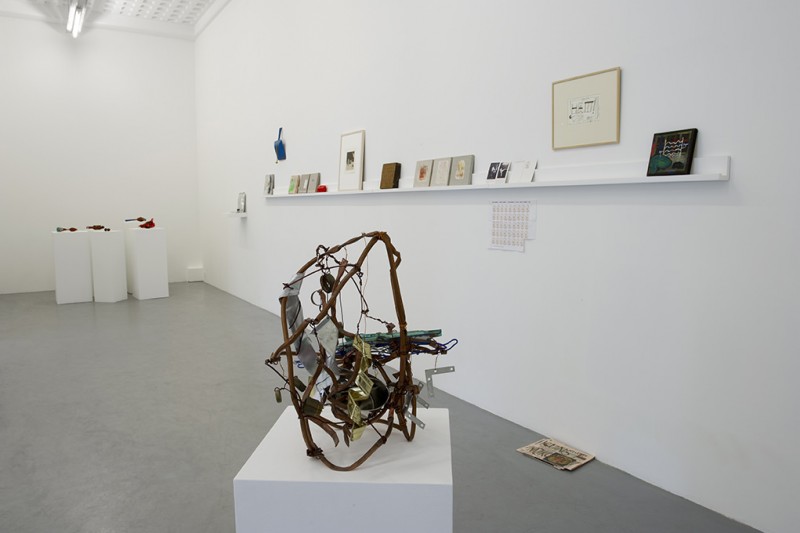 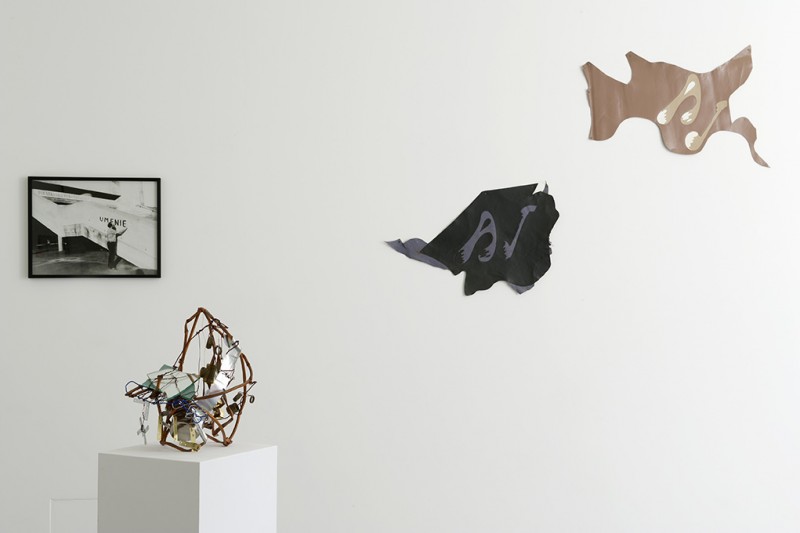 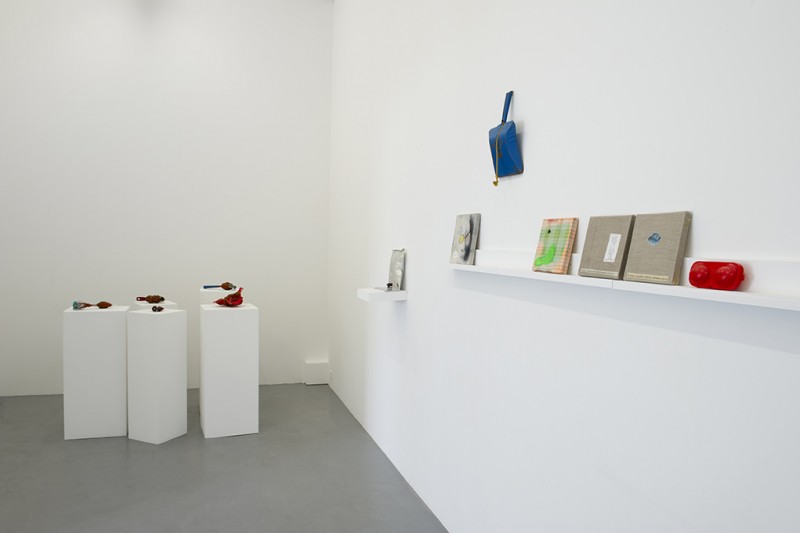 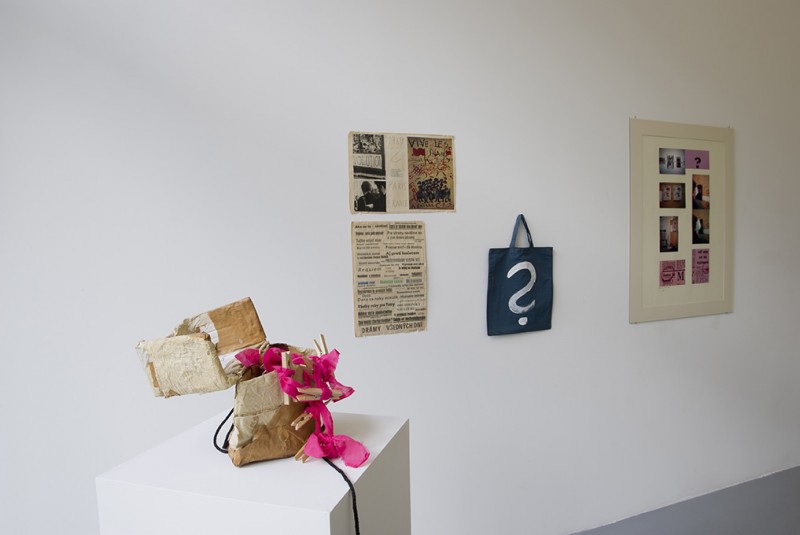 We later discovered that the parallel has already been drawn by Paulina Kolczynska in a text entitled ‘A Tale from the World of Parallel Thinking’ highlighting the formal and conceptual interplays between the two artists. Be it in Prague or Dubai, they both turn their immediate environments into field experiments. The absence of audience in their performances (invisible gestures amongst the anonymous crowd by Jiří Kovanda and solitary walks in the desert by Hassan Sharif) does not have the same origin but reveals a certain fragility. They both take the measure of their space, be it public or private, often urban, in order to redefine their world and position their work. The object progressively appears in their work as a unit of measurement or a pretext for an intervention.

Often invisible and ephemeral, the artwork exists as a photographic document before slipping into a spatial and physical reality. Hassan Sharif and Jiří Kovanda will start pretty much at the same time a work based around the commonplace and the everyday life and will develop a very simple aesthetic with poor and often found materials.

If, for Hassan Sharif and Jiří Kovanda, the necessity to produce objects follows from a knowledge of conceptual art, this necessity is on the other hand the raw material of Ana Jotta’s conceptual work. From the same generation, Ana Jotta comes from a different background: she’s not yet an artist in the seventies and will never adopt the aesthetics of the photographic document. Her relationship to conceptual art expresses itself by other means, through a critique of the notions of authorship and authenticity. She revisits styles as if to erase her own signature. With Ana Jotta, the idea is on a secondary level: the process of doing, the sponta-neous gesture and the handmade practice refers to this assertive ambiguity between the attachment to a conceptual practice and the almost unconscious necessity to produce objects.

Other correspondences in this ambivalence between the assertion of the idea’s supremacy and the reality of the object can be found with Tamás St.Turba. Artist close to this legacy of Duchamp, he considers art as the expression of a way of living. The poet and superintendent Tamás St.Turba confuses the issue with his objects from the seventies to be reactivated in the present.

Július Koller is also in this gap between art and life when he creates his ‘Conceptual Cultu-ral Situations’. He produces a repertoire of objects and signs that will become the starting point for his ‘anti performances’, expanding his field of action into real life.

These ‘baroque’ collages by Hassan Sharif, minimalist, pop or surrealist by Jiří Kovanda, become irreverent Dada associations with Ana Jotta or strange readymades with Tamás St.Turba. If each work was conceived in different grounds, the build-up of Hassan Sharif’s sculptures in Dubai’s consumerist society is not so far from the self-restraint of Jiří Kovanda’s installation towards a certain artistic scene.

Further to these formal or artistic interplays, this exhibition tries to present the way these five artists keep on resisting their contexts, with their rules and codes. Singular and free, their works evidence this conceptual legacy as if it was above all a tool of emancipation bringing the scale of work back to that of the body; an economy of means that would focus on the individual rather than on discourse and makes it possible to remap the border between public space and the private sphere. With almost nothing, each of them, from his balcony in Bratislava, his studio in Dubai or her house museum in Lisbon, is from then on able to invent and imperceptibly trans-form reality.

Jiří Kovanda was born in 1953 in Prague where he lives and works.
«He teaches at the Faculty of Art and Design UJEP in Ústí nad Labem and at the Prague Academy of Fine Arts. His work gain an international recognition in the second half of 1990s based on his action and installation art of 1970s and 1980s, which was interpreted by the Western critique as a political gesture. Even though Kovanda himself rejects political attitudes, his work from the “normalization” period becomes commentary of that time and plays an essential role in the history of art in public space. Kovanda first appeared on the Czech art scene or it’s non-official site along with the second generation of Czech actionism (Karel Miler, Jan Mlčoch, Petr Štembera) in the second half of 1970s. On contrary to his colleagues he develops his art without any interruption till today. His minimalist actions and interventions placed in urban environment – public or private – were based on a scenario, although the actions lasted only few minutes. Documentation became an integral part of the actions and interventions and was created in close cooperation with instructed photographer. Its character corresponds with the exhibition aesthetics of conceptual art of 1960s. – on the A4 sheet of paper is a typewritten description of action and a b/w photo documentation bellow. Leitmotif of actions and interventions was moment of contact, meeting, which re- mained unfulfilled. The form of the actions and installations was so subtle and civil, that they could be mistaken for reality itself and to be almost imperceptible. From the mid 1980s under the postmodernistic influences Jiří Kovanda pursued drawing and painting and in 1990s object, tied with minimalism and conceptualism of the 1970s. He transformed it into contemporary positions of transiency and DIY form. Doing so, he foreshadowed socially engaged attitude of young generation at the turn of the millennium called “inconspicuous tendencies.» (text by Edith Jeřábková and Mira Keratová)

Ana Jotta was born in Lisbon in 1946, where she works and lives.
«After studying at Lisbon’s Fine Arts School and Brussels’ Ecole d’Arts Visuels de l’Abbaye de la Cambre, she collaborated as an actress, set designer and scriptwriter (1969-1980). From the 1980’s onwards, she focused her activity on the visual arts and since the early nineties has been a regular presence at major art fairs and biennales (Arco, Brussels, Johannesburg, Barcelona, etc.). In 2005, she had a retrospective exhibition at the Museu de Serralves. Ana Jotta has build her work in a sequence of breakthroughs that embody some sort of erasement: of her own previous footsteps; of modernist ideology and post-modern mythologies; and of the notion of authorship - either by deconstructing it or rebuilding it, she has attempted to dismantle the idea of a coherent or univocal style. Through a bare economy of means, her works shows a great sense of intelligence and wit. With Ana Jotta, you can always expect the unexpected.» (text by Ricardo Nicolau)

Július Koller was born in 1939 in Piestany; he died in 2007.
In 1965, he publishes his manifesto called Anti-Happening (System of Subjective Objectivity) that involves the use of everyday life objects and of real world like a given program for an automatic and infinite aesthetics. The notion of Anti-Happening is not opposed to the notion of Happening but rather seeks to enlarge the artistic reach of gesture and thought. His Anti-Happenings turn mundane events into ‘Cultural and Subjective Situations’. He seeks to create new cultural situations that aren’t new art, but rather new ways of living: a new creativity for a new humanistic culture. With his projects, actions and manifestos Koller gradually alters reality. In the face of Communist ideology, subjectivity reclaims its role with all of its poetry and discord. Concretely, the Anti-Happenings, ephemeral gestures and actions, are relayed and commented by means of text (postcards, drawings, posters) and black and white photographs. At the same time, Július Koller realizes paintings in which he develops a system of signs that correspond to a typology. As from 1967, he uses latex and acrylic as well as white which, for him, include all the colors and expresses better a certain spirituality. The style of his paintings remains imperfect, almost naive. The creation of parallel universes was a way to resist against totalitarianism. Little by little, his work comes to illustrate the different events of his own personal mythology: between sciences and traditions, ideas and beliefs. In the face of the complexity of historical process, Július Koller gives to his work a cosmic dimension where contradictions between utopy and real life are moving thanks to a subjectivity turned towards the future.

Tamás St.Turba was born in 1944 in Fót. He lives and works in Budapest.
Since the mid 60s, poet, artist, non-art-artist Tamás St. Turba (alias Szentjóby, Stjauby, Emmy / Emily / Grant, St.Aubsky, T. Taub, Tamás St. Auby, etc…) resisted ideological systems.Through texts, objects, poems, music, drawings, film and environment, he partipated in Mail Art and acted as a translator, promoter and actionist of Fluxus. In 1966, together with Gabor Altorjay, he realized the first Happening in Hungary. In spite of numerous government repressions, he continued his activities, organizing concerts, actions and exhibitions. In 1968, Tamás St. Turba founded the International Parallel Union of Telecommunications (IPUT) and subsequently becomes its superintendent. With this organization he constructs a parallel situation in which he develops projects. In 1972 he formulates research around the idea of the Strike and in 1975 presents the ‘Subsistence Level Standard Project 1984 W’ (SLSP1984W) whose principal idea proposes that every person should receive a subsistence allocation to be subtracted from the Defense Budget. These are artistic / non-art-artistic decisions that paralleled the incessant censorship and punishment by the state and the church of the reigning Myth. In 1975 he was exiled from his country, Hungary. He, as the superintendent of IPUT, continued the development of the SLSP1984W in Geneva, maintaining his iconoclastic position on the margins of the art market.

Hassan Sharif was born in 1951 in Dubai where he lives and works.
In the 1970s, he published satirical drawings and caricatures in the newspaper Akhbar Dubai. Following the propitious discovery of oil in 1966 in the Gulf region, the city is in the midst of a transition, and the artist can thus observe how strikingly the traditional Arabia is being transformed. Very early, he tries to find in art books alternatives to the general trend he was observing around him back then – the return to non figurative and calligraphic tradition: «From the beginning, just by looking at works in my books, I was becoming aware of a different way of thinking and making art. I was always trying to find a way. I knew there was something new and different out there.» In the early 1980s, during the years he spent in London at the Byam Shaw School of Art, Sharif develops experiments using simple objects. He understands the importance of the use of an object as a base for further construction and made his first attempts to build a two-dimensional field (the grid) with the purpose of revamping the framework of his artwork. From 1982, Hassan Sharif develops the ‘Objects’ series. Using simple materials, like newspaper or jute, he makes sculptures which are sometimes autobiographical but mostly result of simple, repetitive actions and gestures of transformation.