Several central themes resonate in the artist’s work: personal narratives juxtaposed to or integrated with public ones, a concentration on individuals and their environments, an interest in exploring the layers of the cinematic medium, and the variety of emotions that can be conjured through this vehicle. Stylistically, Fast’s work often focuses on the relationship between image and sound. 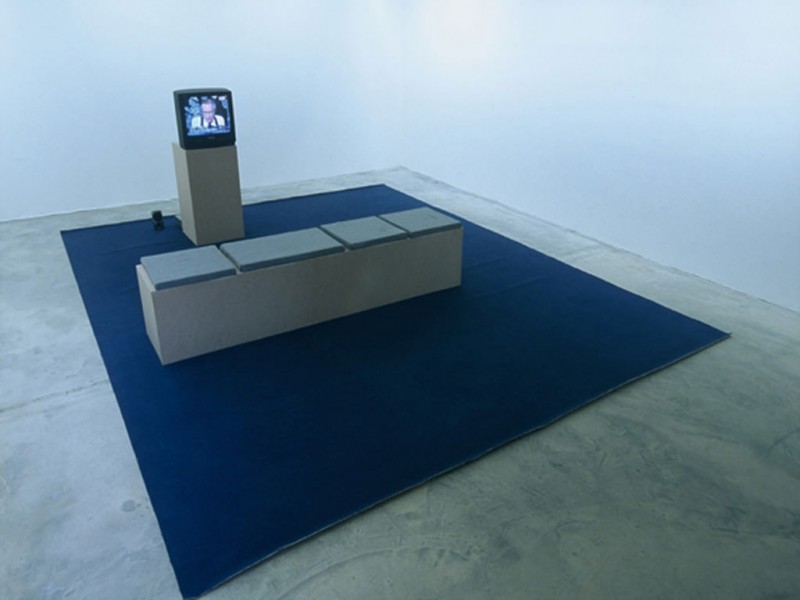 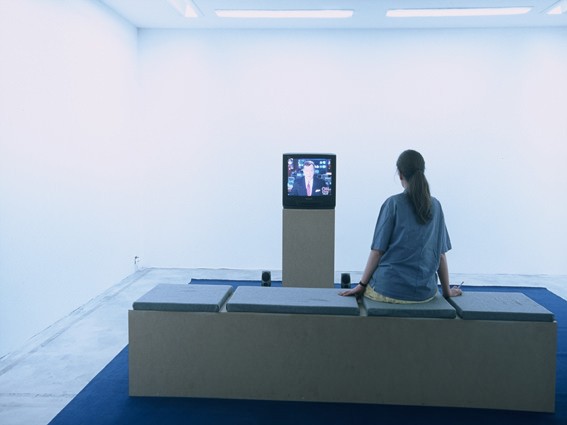 In CNN Concatenated, Omer Fast splices a vast amount of CNN footage: Male and female presenters, reporters and weathermen briefly flash across the screen, their sentences are fragmented to such a degree that each person only ever gets to say one word before disappearing. Edited from a database of ten-thousand clips, the words are strung together to form hurried and jerky sentences, which address the viewer directly and in very personal terms. Started in late 2000 and taking two years to complete, the work is a time capsule that shows the transformation of news coverage before, during and after September 11, 2001, while hijacking that coverage to deliver a monologue about fear and longing. 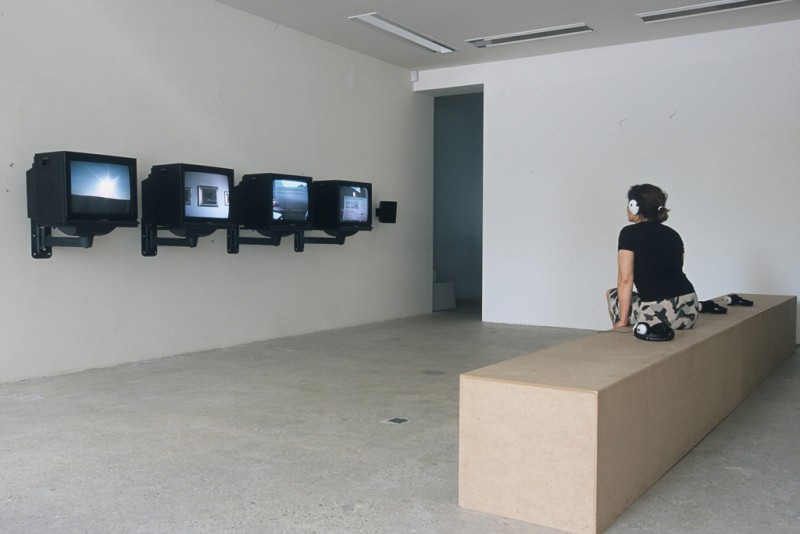 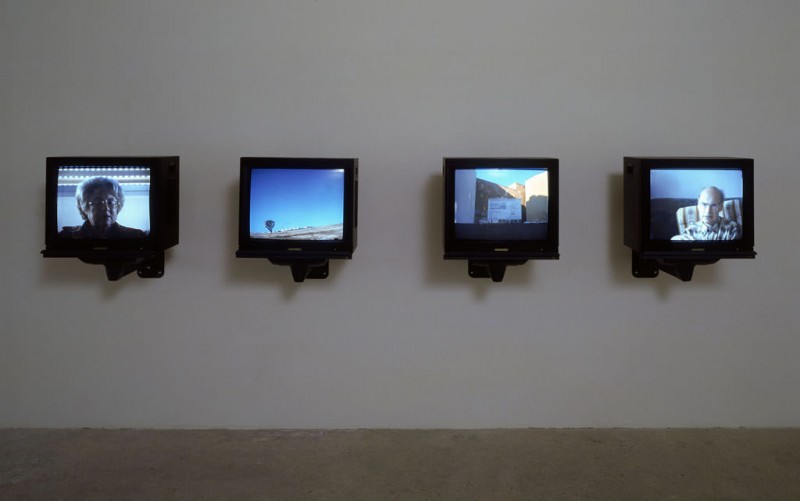 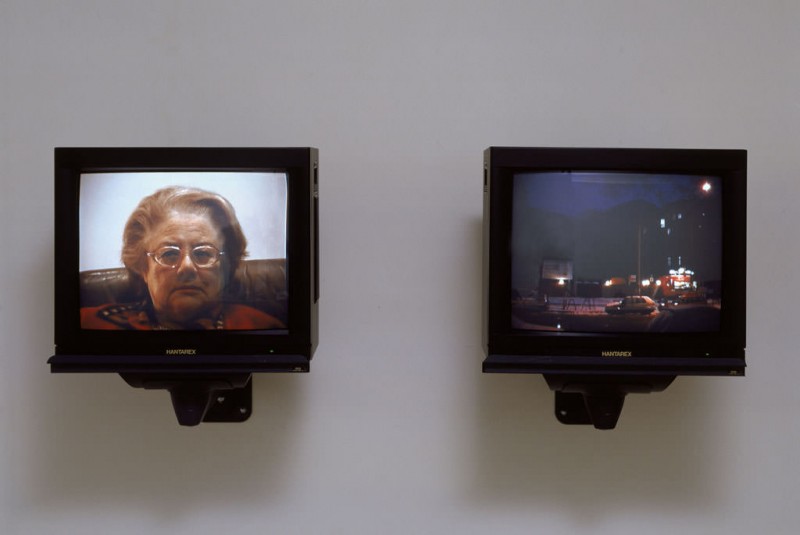 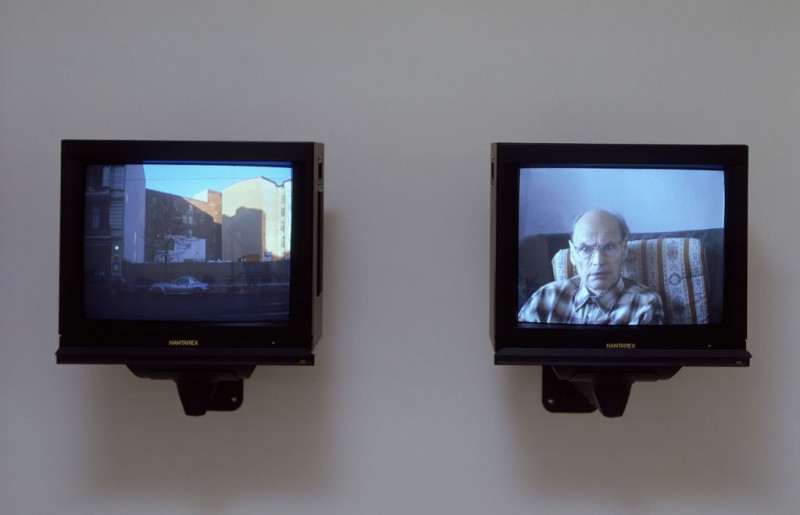 “In the work ‘Berlin-Hura’ (2002), presented at the gallery, Omer Fast teases out distinct, and at times contradictory, histories of his lineage. From an apartment in Tel Aviv, an elderly woman recounts the story of several plots of land near Hura in the Negev desert located in the south of Israel. It is a place she visited long ago and her recollections of it as it may have existed contrast dramatically with recent footage of the place shown simultaneously—her vision of Bedouins living in tents as nomadic peoples in the desert is a counterpoint to the permanence of the stone homes that exist near the cultivated land today.

Contrasting the desert landscape, a third element is incorporated into the video depicting the location the narrator’s family once lived in Berlin before immigrating under duress to Palestine in 1936 to escape the persecution of the Nazis. While the home no longer stands, a void remains—a palimpsest of urban life in which one generation simultaneously builds upon and obliterates that which came before. These kinds of contradictory elements exist throughout the piece both visually and conceptually revealing complicated notions of possession, identity, and belonging.

As the woman tells her story, an elderly gentleman appears on another screen. He is a German actor instructed to repeat the same text, appropriating the narrative as his own. The ambiguity set up by the man reiterating the story blurs the line between documentary and fiction as well as amplifies the scope the text. That this story could belong to one person or many, or can be adopted as one’s own, or passed from one person to another as a kind of oral history is inferred through the presence of the additional figure.

The ambient noise of the three locations and the occasional visual of a train, plane, pedestrian, camel or car passing through the spaces imbue them with an ordinariness that belies their loaded meaning in the context of the work. These sounds are isolated from the narrators’ dialogue, which can only be heard through headsets in the gallery, bringing an intimate quality to an otherwise difficult work.

‘Berlin-Hura’ is about the unique history of the storyteller—through whom the relationship between disparate places exists. The complications of history, politics, experience, and personal identity infuse the work with contradictory emotions such as idealism and resignation. The four components—the old woman and man, the views of Berlin and Hura—shift from one channel of the video to another functioning much like memory—flashes of images and ideas, broken narratives, and isolated moments, that contrast with the materiality of the landscape. And as the work slowly unfolds and the story becomes clear, so does the portrayal of daily life in Berlin and Hura.

Conversely, the rapid-fire quality of CNN CONCATENATED (2002), dramatically differs from the quietness of Berlin-Hura. Quick-cuts allow the news anchors on CNN to say what the artist wishes. The sentences that are strung together include helpful adages and reveal personal longings. They humor us as well as undermine our impression of what news is supposed to be—just facts, impersonally delivered by talking heads on the screen. What we realize is that news reports are riddled with personal components that may not be immediately apparent. As the work continues, the cuts quicken, reaching a frenzied pace that can be compared to the fear and hysteria brought about by the events of September 11. Indeed, most of the footage dates after the tragedy. Breaths of air taken by the anchors are the only relief; however, they too appear more like gasps than respite. The desire to communicate is the main impetus here, but it is through personal connections that inspiration is found.

Fast’s approach is laid plain in his work—the process is always visible. No strict guidelines or interpretations are delivered, therefore affording the viewer the opportunity to be included in the interpolation of the works. Often, the works provoke more questions than provide answers. Through his work, Fast reveals the contrivances of modern life, and explores their inherent contradictions. This kind of discovery can be found in places as diverse as an apartment in Tel Aviv, a lot in Berlin, a settlement in Israel, a small town in America, and even on television”.

Excerpt from a text written by Tracy Adler included in the catalogue published by gb agency in 2002.