Anyone with the good fortune to meet Robert Breer has experienced the moment at once collusive and magical, optical and sensual, and which stops time, when he gathers in his hand a collection of pages of his drawings and flips them, generating a sense of movement and creating a moving picture. «I’ve always been fascinated by the magic of the phenomenon; it’s the starting point for all my experimental films» said Breer.

Between Cinema and Fixed Imagery focuses on this essential moment in order to understand the complex, radical and experimental work that is also filled with humor and wit. The act is transformative, a miracle of illusion, when everything becomes movement, when the artist offers the pleasure of surprise to one who knows how to look. But before the flick of the pages, there are the drawings, the still picture, and the composition: Robert Breer began as a painter. If each of the photograms in his first films were a painting, Breer quickly began «to think of the moment on screen as an interruption in continuity». And it is this process where time becomes a function of space and form that interests the artist. 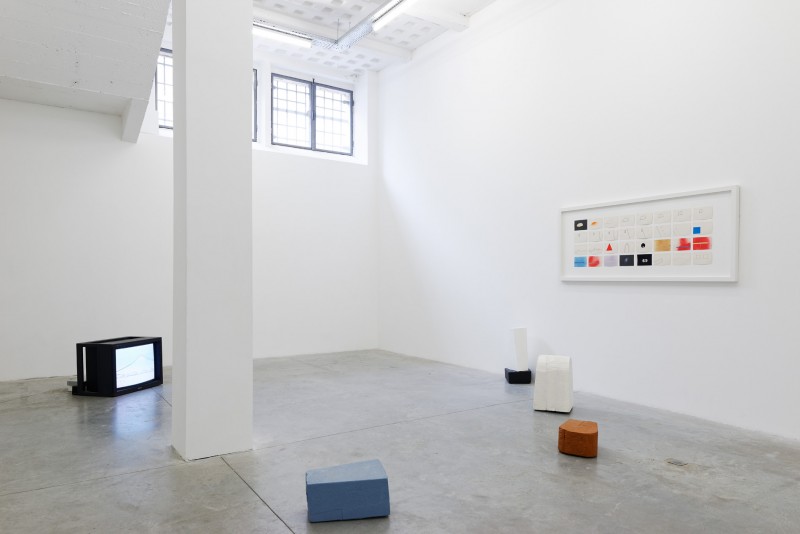 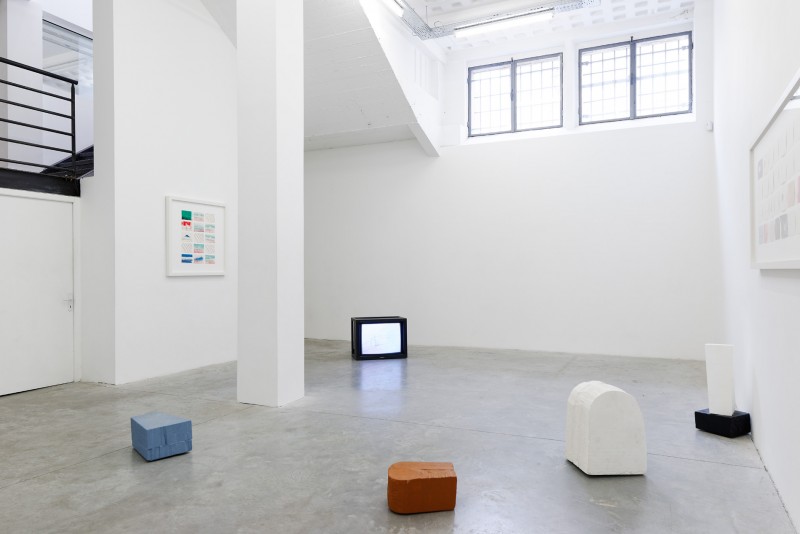 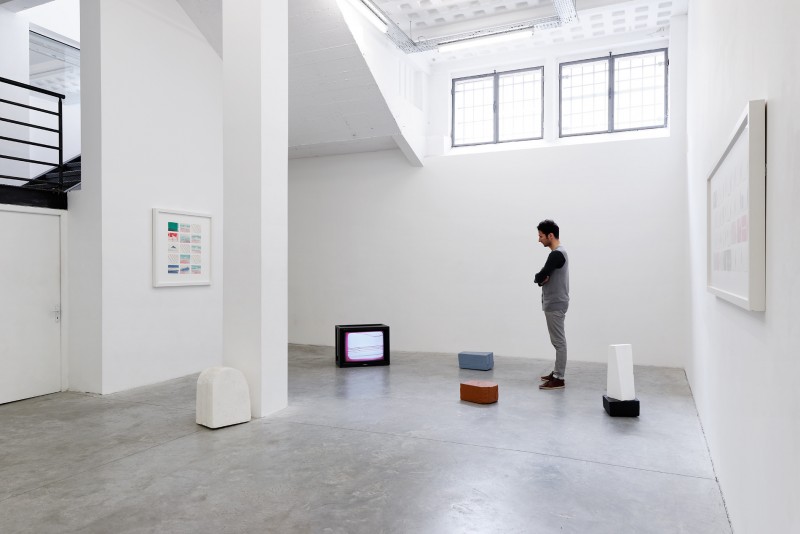 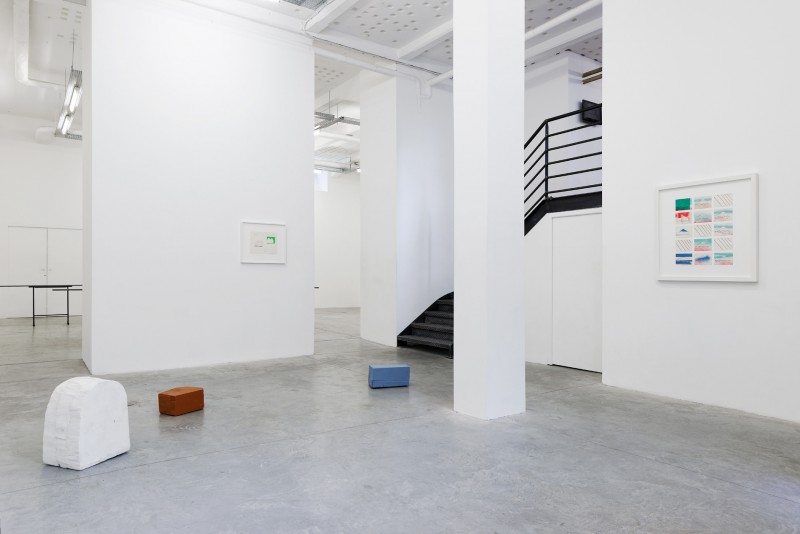 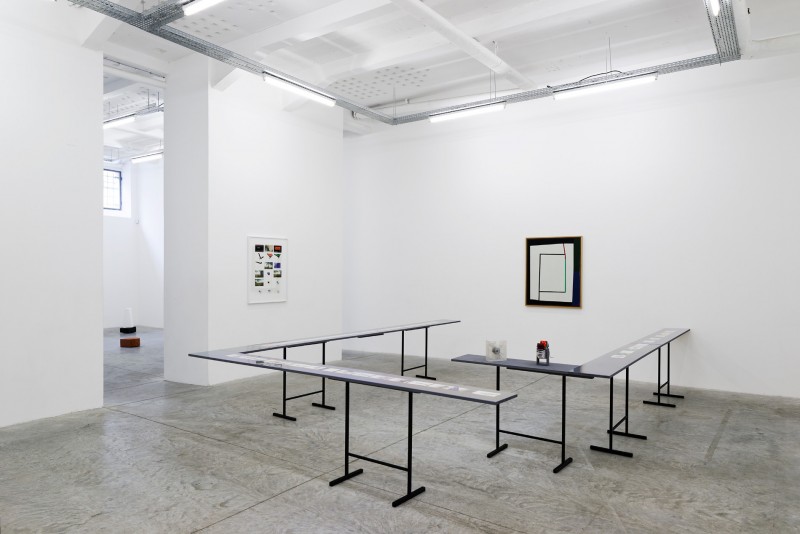 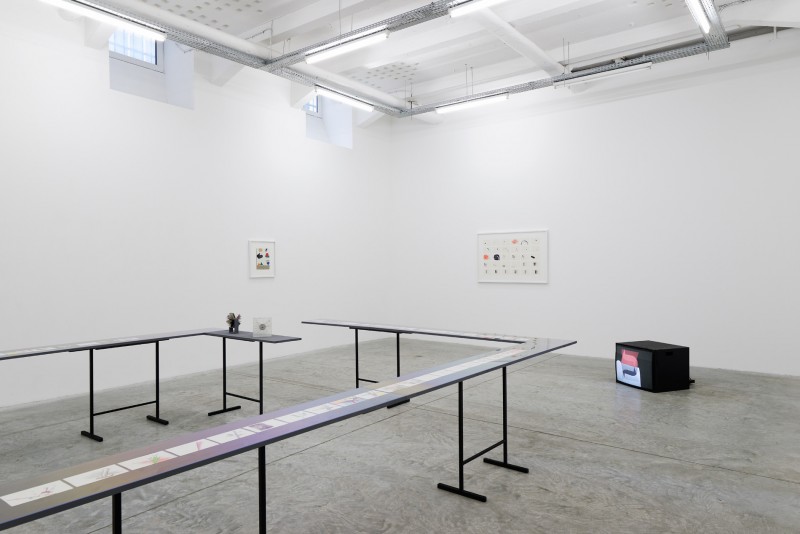 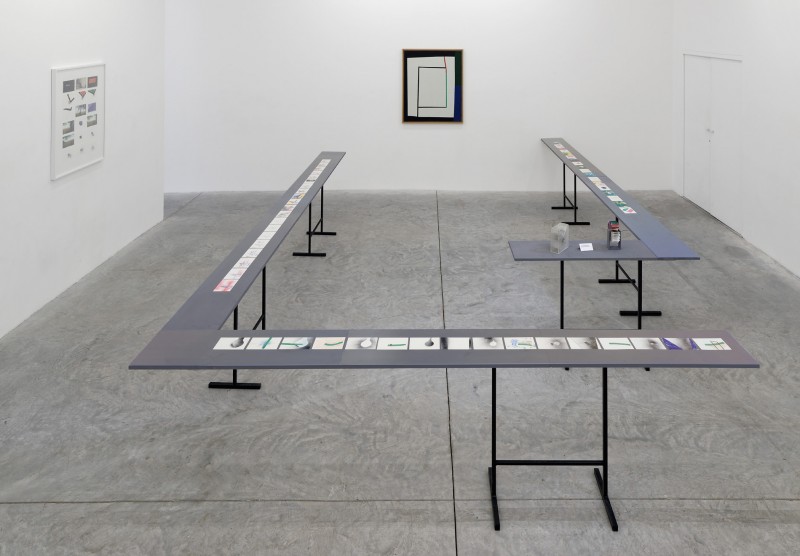 In this exhibition, we wish to show the abundance of materials and film techniques used by Breer (drawings, cutouts, photos, collage, watercolor, spray paint, stencils, photomontage, news clippings…) along with his methodology of equivalence - a system juxtaposing wholly unrelated images - though that system could suddenly collapse with his introduction of the random. These series of motionless drawings offer glimpses of what cannot be seen when they go by too quickly in the films, they draw us in to look closer and to look differently.

For Robert Breer, placing his drawings in sequence without necessarily telling a story was like creating a painting. Untitled (1953) is a testament to his early cinematographic exploration, the moment when purely geometric abstraction becomes movement and escapes the picture frame. As Breer said himself, he is more interested in evolution than the absolute. The same issues that appear in his paintings are also there in the drawings: questions of composition and framing, color series, and the back and forth between surface and depth: the white pages are like a canvas whose 4 x 6 format forced the artist to compress his images, and the tighter scale raised the tension and energy within the frame. The small format allowed Breer to be entirely autonomous throughout the process from beginning to end. The same technique renders the full screen in his films active and alive: the viewer’s attention is engaged always in all ways.

During the journey back and forth between the temporal and motion filled world of cinema and the fixed world of painting, Breer explores and delights in finding new systems of association, seeking shortcuts, and flipping his pages to find the right rhythm before mixing them up again and trying new combinations. He described this work as both performative and technological, somewhere between the joy of drawing and reproduction on film. By varying the number of photograms, he can speed up or slow down the motion, create halting or fluid movement, and a constant variation of pace and duration.

On exhibition are a collection of drawings which are sequences from Breer’s films. In LMNO (1978) everything is sporadic and appears to fall apart, even if some elements endure like the policeman’s cap. Breer liked change, the shifts from absence to presence, noises to silence. According to the artist, animation is a system that produces anamorphosis. Every drawing is to be just as important as every other, set in a system of equivalences where the position of the images are unrelated to one another and where each appears for an equal amount of time. If a narrative begins to appear, the artist cuts it off. The use of a powdery and grainy look in LMNO - from pulverized spray paint - gives the film a certain coherence despite the enormous diversity of graphic and abstract themes.

69 (1968) is a metaphor for a crumbling system - the artist shuffled the pages in order to reintroduce chance and to de-systematize the structure. The film, which is more geometric, creates an illusion of three dimensional space: an octagonal beam rotates vertically and a door falls backward horizontally. Breer’s Floats are also made three dimensional. As if they had jumped from the page, some of his Floats Tucson #1, #2, #3 and #4 (2009) all made in Arizona roam throughout the ground of the gallery.

Double movement from rotoscoping - which is the tracing of a moving filmed image frame by frame - in a sequence of landscape fragments seen through a train window in the film Fuji (1974) on exhibition and in a series of drawings, portraying an abstract recreation of a trip in Japan by combining methods of representation including film and simple line drawings.

The exhibition is devoted to uncovering each stage in Breer’s creative process, highlighting his commitment to the tradition of painting in his first films and then the rupture that ensued, using the everyday to make deviations in pop art along the way with A Frog on the Swing (1989) or even a more conceptual approach with Rubber Cement (1975). In each case, each frame nearly explodes when it starts to move, and everything is in transformation as in the film 77 (1977). Robert Breer created a tension between the static image and the perception of movement, with abrupt manifestations and subliminal images. We also focus on the beauty of each drawing, the poetry of their combinations, and their subtle construction on paper.

In his correspondence, Robert Breer had said he wanted to exhibit his drawings, though he was sought out for his films. In order to grasp and convey the depth and complexity of his visionary and openhearted work, we have chosen to “set our sight” on Breer’s drawings, and to return them to the central position they hold in the artist’s filmic practice.