Omer Fast’s exhibition at gb agency will consist of new works, which were all made for a solo exhibition at the Pinakothek der Moderne in Munich, which opened on October 7, 2020 and closed several days later due to Corona. In one way or another, all of these works relate to a small drawing by Max Beckmann from 1917 in which the German artist depicted himself following the nervous collapse he suffered while volunteering as a medic in World War I. The sculptures, drawings, found objects and videos were commissioned by the museum and shown in a specially-built installation, which looked like an unfinished exhibition culminating in a deserted residential apartment. Due to the pandemic, the exhibition spent most of its three-month run as an invisible and irrelevant surplus production closed to the public. As a gesture of both desperation and hope, the exhibition in gb agency will attempt to rescue and repurpose this surplus. 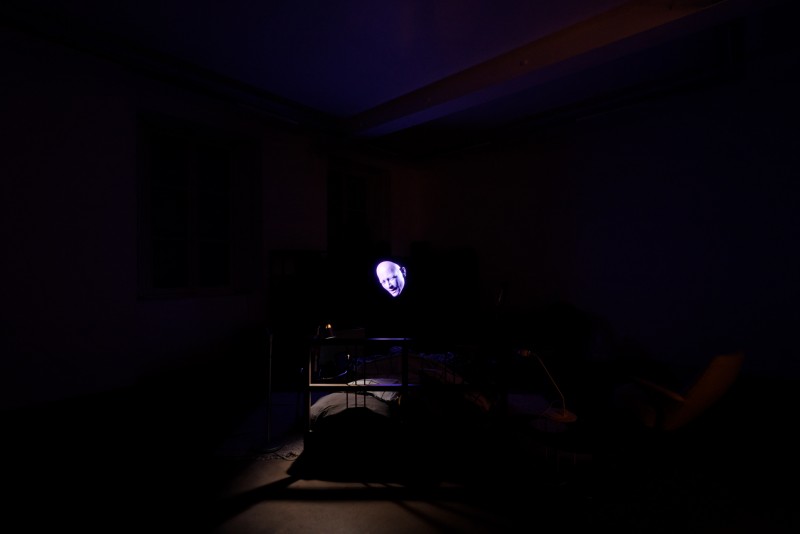 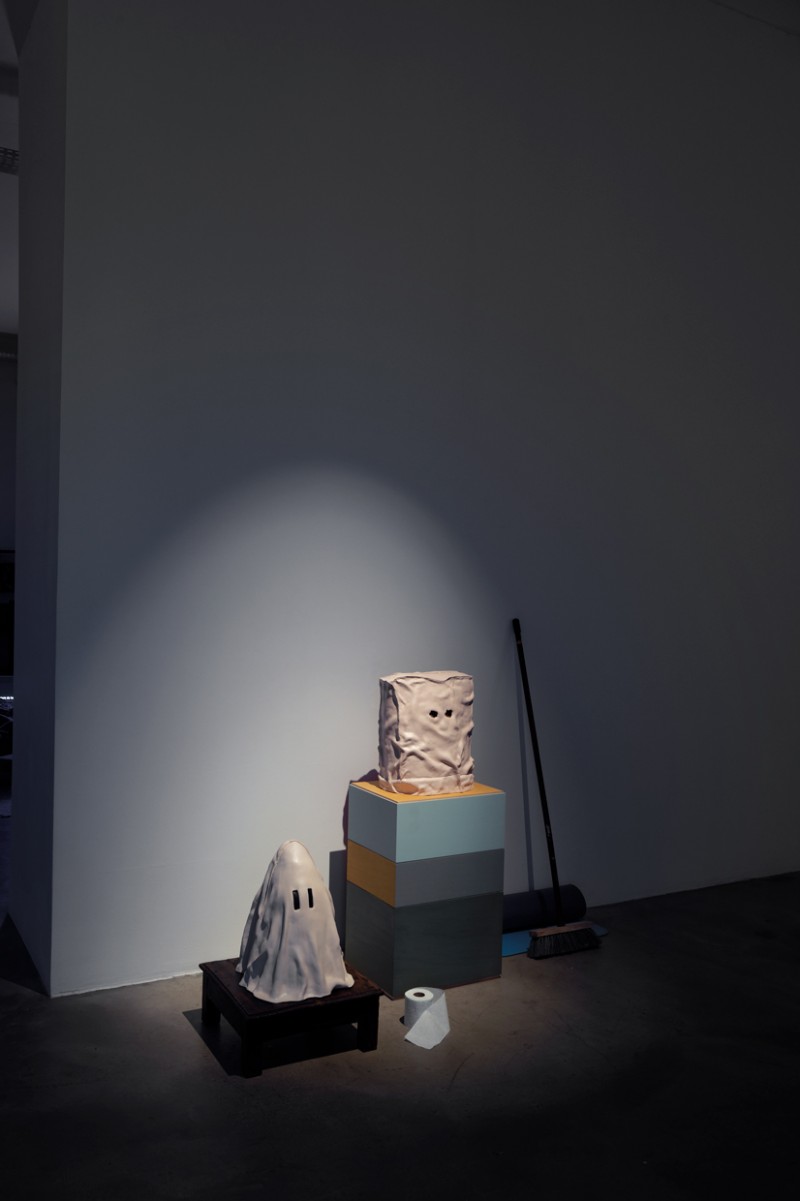 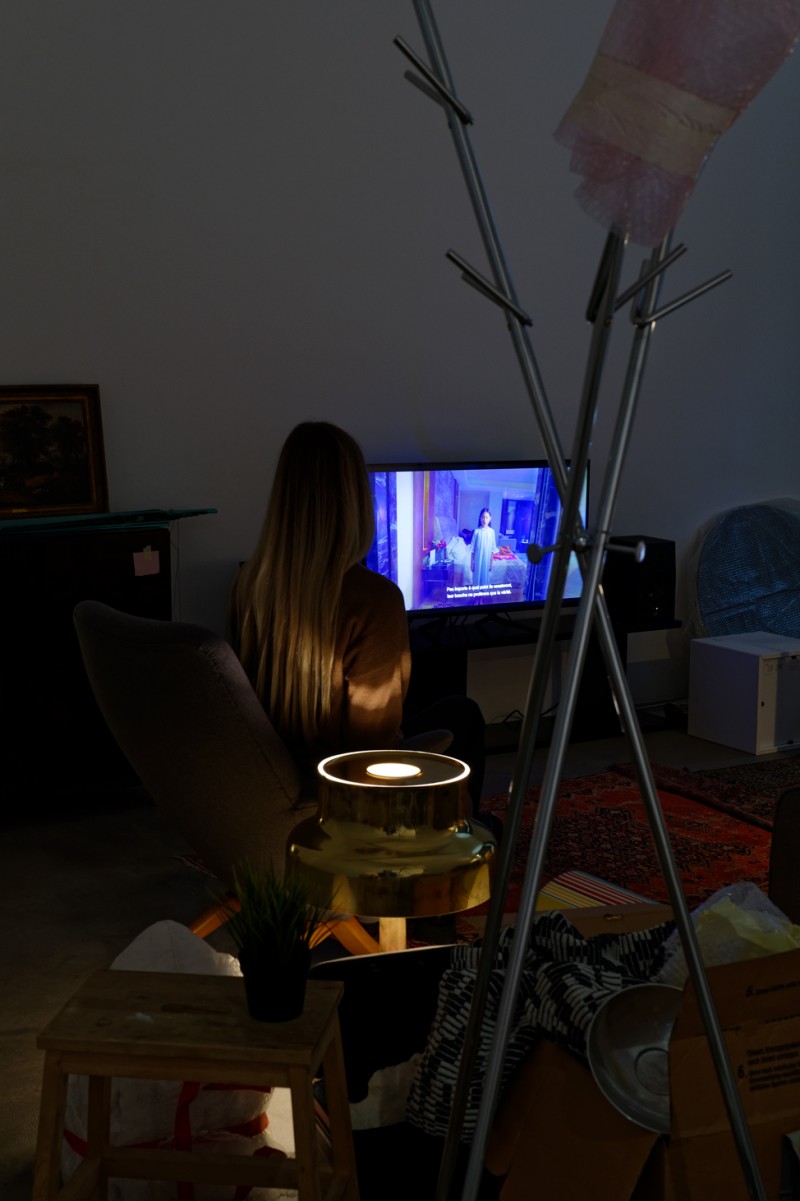 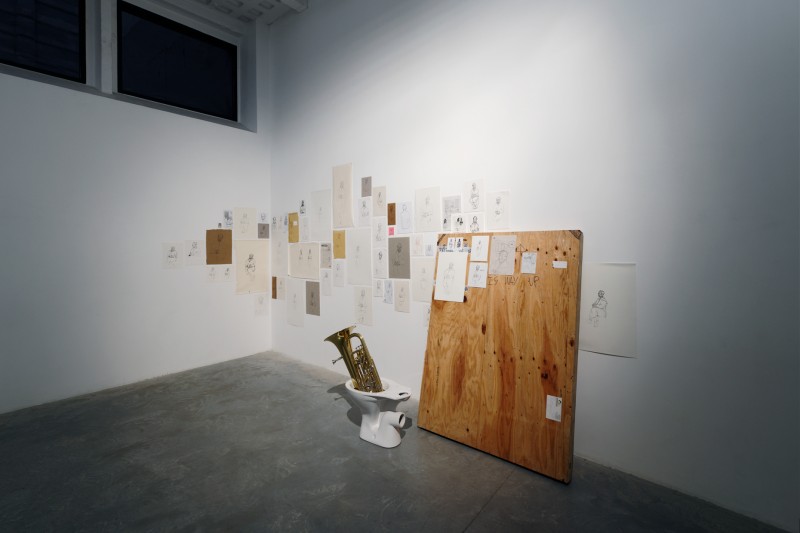 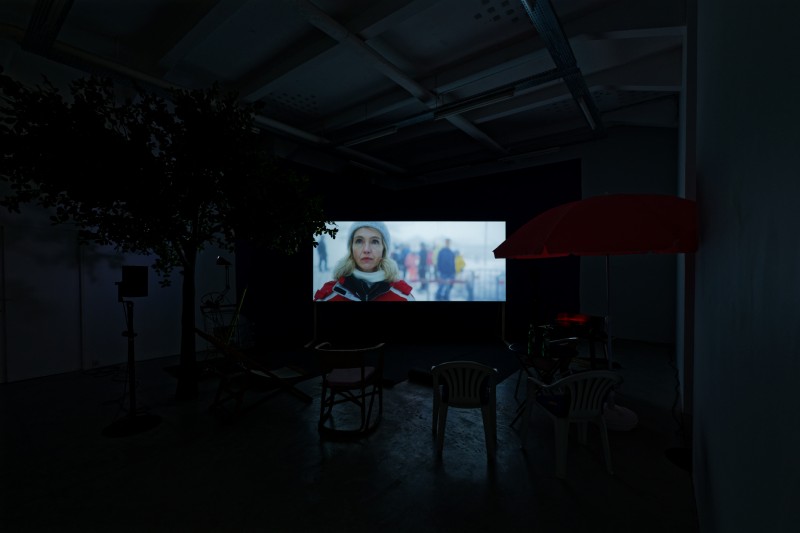 The exhibition of video works is punctuated by sculptures and drawings: portraits of Beckmann pinned on the walls: copies of copies of copies exhausting the traumatized face of the artist, one eye open and the other closed, revealing the void the war has left; and sculptures produced during confinement, appearing as parasites or mutant forms that have infested the space, constructing a parallel narrative that links the works together.

Surplus is built from stereotypes and archetypes in which masks, ghosts and nomads tell stories from the past that shed light on the present, or perhaps stories from the present that exploit the past in digressions and loops between documentary and fiction. The stories are built from different sources, literary and documentary, and question the patterns and symbols that constitute them.

In Karla, 2020 (video) a face, a talking hologram, floats in a room. The real Karla works to filter out offensive images and texts for one of the internet’s giant platforms. How can we view such images today and how are they removed from circulation? Karla’s anonymous testimony is replayed by an actress whose face has been scanned to convert each of her expressions and emotions into digital data. The progressive morphing of her face seems to accompany the fragile construction of her story. Karla, both the witness and the ghostly presence, recounts her role, her endless task to remove ever more numerous and unbearable content.

If the questions concerning Karla are contemporary, Omer Fast takes a side step with Beckmann’s Rope, 2020, a video installation in which we return to the moment when Beckmann acted on a major rupture: fleeing his home country and never returning to it. The short video shows a woman binding a man with a rope to suspend him up-side-down from her own body. The performance refers to the work Le Départ, an enigmatic triptych painted by Beckmann between 1932 and 1935. Beckmann’s work, visionary of the horrors to come, was to be recreated by Omer Fast as the filmic centrepiece of his solo exhibition in Munich. The film shoot was alas cancelled due to the pandemic and the only remaining fragment, a rehearsal filmed just before the outbreak, shows the slow embrace of two dancers in an intimate setting.

Back to the 21st century where everything is accessible and shared, where public space is under constant surveillance, where private space is no longer private, A Place Which is Ripe, 2020 (video) is another way of questioning images. Not the ones Beckman saw in 1917, but the ones analyzed by two Scotland Yard police officers who, through the use of surveillance cameras and their talent for facial recognition, try to find the culprits of a murder. Their story is visually nourished by images compiled simultaneously and automatically by a Google algorithm. For A Place Which is Ripe, Omer Fast experiments with the documentary format, using three synchronized mobile phones to tell the story. Echoing Karla, the knowledge of the robot coexists with that of the human being. A growing asymmetry and complementarity is taking hold between man and machine.

As if he wanted to distance himself from this unstable and fragile present, Omer Fast turns in two further works to a medieval Jewish fairy tale reimagined at two different pasts. The Invisible Hand, 2018 (VR video) is an urban fable set in the People’s Republic of China. A child tells the story of an encounter with a ghost which brings material prosperity to a family but causes ethical and social disruption. The child is both the witness and the heiress to important changes experienced by her family.

The counterpart of the same fairy tale takes place on a chair lift in Austria, De oylem iz a goylem, 2019 (Video) reimagines the encounter as a meeting between a skier and an Orthodox Jew. In order to exorcise the ghost and free herself from his grip, the skier must cross into the fairy-tale world and reimagine the story from the ghost’s perspective. The theme of repetition and the impossibility of resolution are a constant in the artist’s work. The past bursts into the present and both exert constant reciprocal pressure to shape each other. These two films highlight the pressures that attempt to sterilize culture through various identity policies at a time when globalization seemingly celebrates any form of culture or particular identity.

Whether they remove or render something visible on digital platforms, or whether they cross the boundaries of the living and the dead, these characters, these liminal beings, provoke the systems of power and their conventions.
Experimenting with exhibition formats and forms, Omer Fast fictionalizes what he sees of our world, its transformations and aspirations, while insisting on the truth value of what his protagonists tell us.

As the resulting reflection of this indeterminacy between myths and truths, the white cube gives way to a staging that contaminates the exhibition space by introducing details and symbols that come from elsewhere, from another era or from other economies. Spaces that are both false and familiar, settings of erasure and reframing of the conditions of seeing; Omer Fast blurs the lines.