I GOT UP
An exhibition activated by Pierre Bal-Blanc 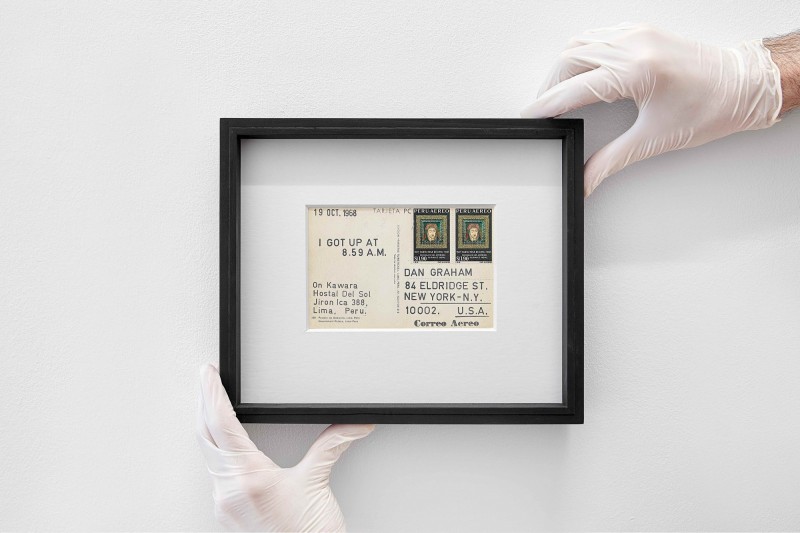 The exhibition entitled I GOT UP activates the formula used by the conceptual artist On Kawara in a series he began on May 10, 1968 and completed twelve years later, in 1979 following the accidental theft of his notebooks and the ink pad used to produce them.

The I GOT UP series consists of sending a postcard to different recipients every day, indicating with an ink stamp the exact date and time of the start of the artist’s daily activity. This series, produced over more than a decade, should be understood as a work of which only fragments are available, like one of the postcards addressed to the artist Dan Graham, presented in this exhibition.

The opening performance of the exhibition uses the same date and time as that written on the postcard sent more than half a century ago in 1968 from Lima in Peru to the American artist in New York in the United States.

The exhibition will be activated on the morning of October 19, 2021 at 8:59 am for an exchange in the presence of a person who will have spent the previous night in a bed installed in the gallery. Access to this room, which usually serves as a showroom, is not available from the public entrance to the gallery, but from the private residents’ door of the building, Intercom Toni Smit, at the same number: 18 rue des quatre-fils.

The exhibition, apparently presented in a domestic space, but concretely situated within the perimeter of the ground plan of the commercial gallery, thus underlines the disappearance of all privacy. Works produced at the same time as that of On Kawara or more recently by artists of different generations and origins echoing this series which has become a canon of conceptual art will be exhibited, thus forming a constellation which anticipates or relates to the current condition of our societies of control.

Grand Central Hotel is a ruminative portrait about the American musician, activist, and essayist Terre Thaemlitz.
Supported by FID Marseille.

The film is inscribed in the cinematic tradition of the portraits de ville genre. It departs from the etchings Eaux-Fortes Sur Paris by Charles Méryon and draws a parallel between the quickly transforming city of Paris under the rule of Napoleon III and Baron Haussmann, and Paris of 2015, shortly after the terrorist attacks and transitioning into the Greater Paris under François Hollande.

With thanks to Marie Vachette

Pierre Bal-Blanc is an independent curator and essayist based in Athens and Paris. His last projects are the retrospective exhibition The Non-Canonical Gospel According to Tomislav Gotovac (also known as  Antonio G. Lauer) National Gallery Tirana, 2021; “I GOT UP” with On Kawara, Georgia Sagri, Delia Gonzalez, Serapis Maritime and Sophie Calle at Hotwheels Athens, 2021; “Le salon Turc” with Nilbar Güreş, for de Appel at Stedelijk Museum Amsterdam, 2021; “All Criteria This Position Any Moment” 2020 with Cally Spooner in Haus N Athens. His last publications are “Der Canaletto Blick-The Canaletto View” (Kontakt/Walther König 2020); “Collective Exhibition for a Single Body-The documenta 14 Score” (catalogue Museumcultuur Strombeek Gent, 2019); “The Private Score” (catalogue M Leuven/gb agency/Paraguay 2019). He is part of the Advisory Board of Flash Art Magazine where he has published the column “The Curatorial Gaze” in 2020-21.