Homecoming, the newest exhibition in Paris of work by Mac Adams, proposes a number of narratives. The gallery has been turned into a center of operations for building indeterminate scenarios open for interpretation.

Starting with The Homecoming (1976-2017), this installation sets the stage : is it a tableau vivant or a stage without actors, a frozen image captured on camera or to the contrary a closeup carefully and slowly scanning the minutiae of a production ? The viewer, both witness and voyeur, fills the gaps in a fragmented story line. 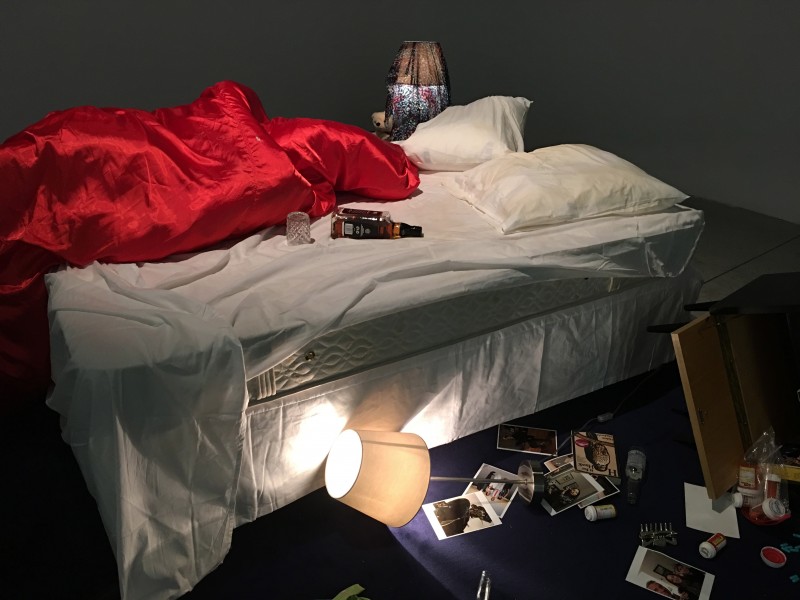 “The concept of narrative fiction and real time has been a theme in my work since the early seventies. The construction of fictional environments which involve a crime or at least the realization that a crime could have happened lead to the inclusion of real time elements, these elements take a variety of forms from the wind moving a curtain in a room, bubbles being formed in a continually running bathtub, the disintegration and rotting of food, the sound of music or the scent of perfume permeating a room. Many of these environments were influenced by the study of how the camera in film moves through a scene; the utilization of different lenses to give narrative tension to what actually appears in the frame and what is implied in the narrative void. These strategies were built into my structures, the viewers’ eye becoming the camera but unlike a camera in film forms a linear structure this time a fragmented non-linear structure forms on the retina.”

The Homecoming shows, or rather helps understand, what might have happened : a moment from an image without subject, a story without characters, a scene without actors. The absence of the key elements allows the viewer to create their own story. The public is summoned to explore each detail (a spilled glass, a framed photograph…) which is a clue. Like the oral histories in Wales where Adams was raised, the artist develops story lines. Influenced by novels and crime films, as well research into semiotics and the use of symbols and language, Adams’ installations are exacting productions in a precisely defined time and space, detailed compositions that result from a performative action, a sculptural or cinematographic reality, and in addition literary tradition. Adams’ work is never reduced to one practice, but rather has always addressed the “space in between” and sought to understand the ways we read things and how stories are put together. In the same way that a work of art is built on absence and desire, Mac Adams bases his environments on the absence of the lead character, and his photographs on the absence of the main action.

Indeed, if Adams is primarily a sculptor of ‘environments’, he simultaneously makes photographs of scenes that he initially described as ‘Domestic Devastations’. Those experiments and sketches would lead in 1974 to the photograph entitled Circumstantial Evidence, first in the Mysteries series that he would work on until the end of the 1970s. That piece, a black and white diptych of a cat and a spilled glass of milk, is his declaration of principles, a humorous analysis of a serious subject, the way prejudice and stereotypes influence our judgement. Yet it’s also a statement about the makers of images and codes of meaning.

At the same time in New York, through the dealer John Gibson, Adams was meeting artists such as Bill Beckley, Peter Hutchinson and James Collins, with whom he became associated as part of the narrative photography movement. With regard to conceptual photography focusing on elements not seen in the image and an introduction of the creative process directly into the piece, Adams embraced the form of the less elitist criminal investigation, with sequences of photographs (often diptychs with a before and after) in which the clue in the image turns into language and the photograph can be read as a text. Nonetheless, what interests Adams is less the linear and scientific reading of the investigation, and more the indeterminate story open to interpretations, often contradictory, since he welcomes the subjective scrutiny of the viewer with their own memories and codes that add to storytelling. The absence of the main action, what the artist calls ‘narrative void’, contributes to the fictional encounter.

Forty years later and for the first time, in this exhibition Adams turns the cardinal work into a three dimensional piece. Based on an absence, on the void of a work, the artist creates a storyline and asserts the porosity between photographic image and spatial reality. That decompartmentalization of forms already appeared in 1971 with Eight Small Sculptures, also shown in the exhibition, of eight color photographs, each of hand making a sculpture. Somewhere between photography and sculpture, Adams invents another way of being present, creating his own temporality and turning himself into director/producer. Also on shown are a collection of photographs from the series Post Modern Tragedies, started in the 1980s and in ongoing development.

“In the early part of the 1980’s I began a series of images titled ‘Post Modern Tragedies’. These works were in part a response to what I saw happening under Thatcher/Reagan economic policies in the UK and the USA. I am not a documentary photographer, however I wanted to see if I could construct a situation that reflected the political conditions and contradictions of the times. It was also a response to the postmodern discourse of the 80’s. I believe it was Jean-Francois Lyotard who coined the term techno-schizophrenia in his 1979 book ‘The Post modern Condition’ and I took this idea of combining visual contradictions and began making these hybrid collisions between social tragedies and designer utensils. The chromed mirrored objects were photographed on seamless paper like conventional utopian adverts implying a neutral space existing only in the viewers desire to possess. However reflected on the surfaces were violent unsettling situations, interrogations, shooting, etc. Situations that completely contradicted the forms with their perfect metallic skins.”

With this exhibition we wanted to join in on the back and forth in time, and to re-examine a precise and experimental practice, underscoring the artist’s own continuum of concerns: toying with the ambiguity of human nature and calling the alarm to its risks, not the least being a society in which ‘alternative facts’ would be turned into truth.