The work of a historian could be that of filling gaps, giving meaning to a suite of events from exhumed documentary sources and to construct, like a novelist, a plot in order tell us a story that really took place. The work of Yann Sérandour is similar to the work of that historian: using artifacts borrowed from his predecessors, potential accidents and chances, he leads investigations and indexes missing pieces, in order to prolong and cast doubt on histories.

The work of Yann Sérandour has often referred to conceptual art of the sixties and seventies, periods of particular interest to him because of their copious diffusion in the form of publications and prints – his material of predilection. For his new show at gb agency, he moves his attention to other fields and more distant times, strengthening a temporal gap with our contemporaneity. 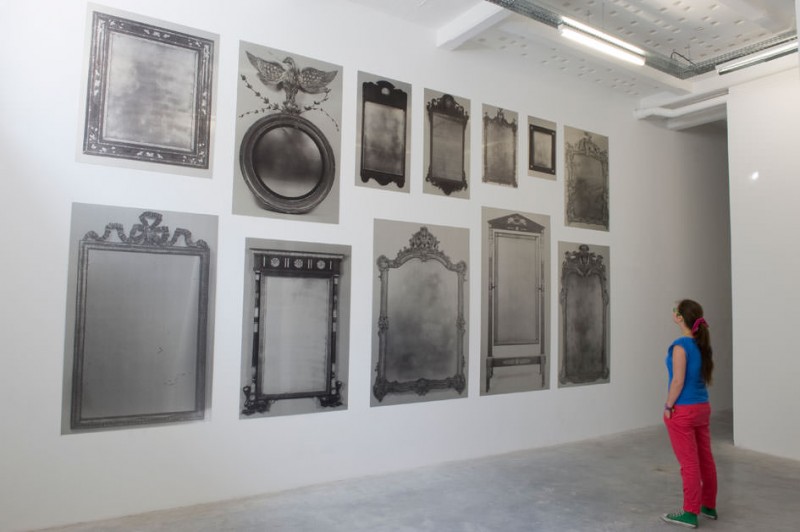 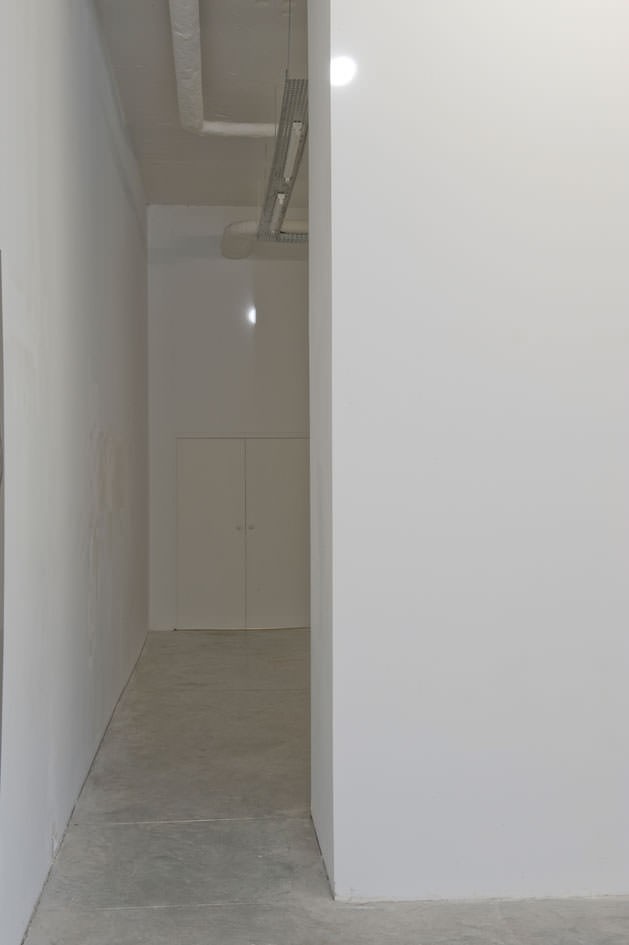 Yann Sérandour
Cloudy With a Chance of a Ray of Sunlight, 2011 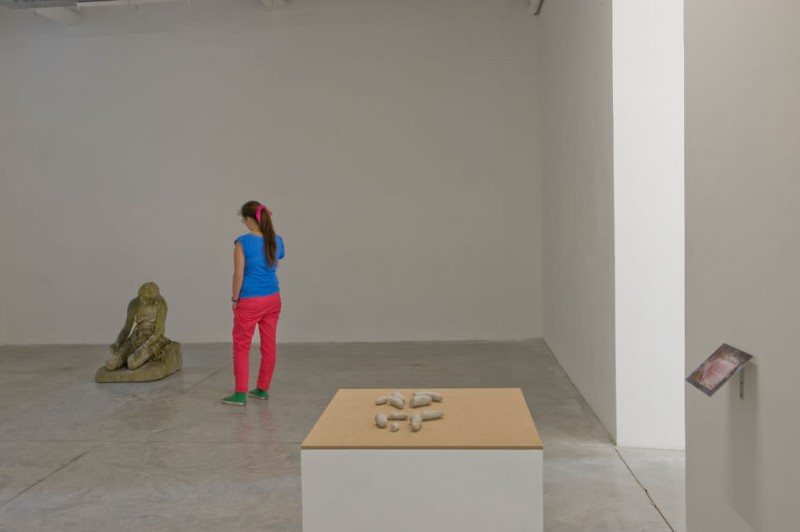 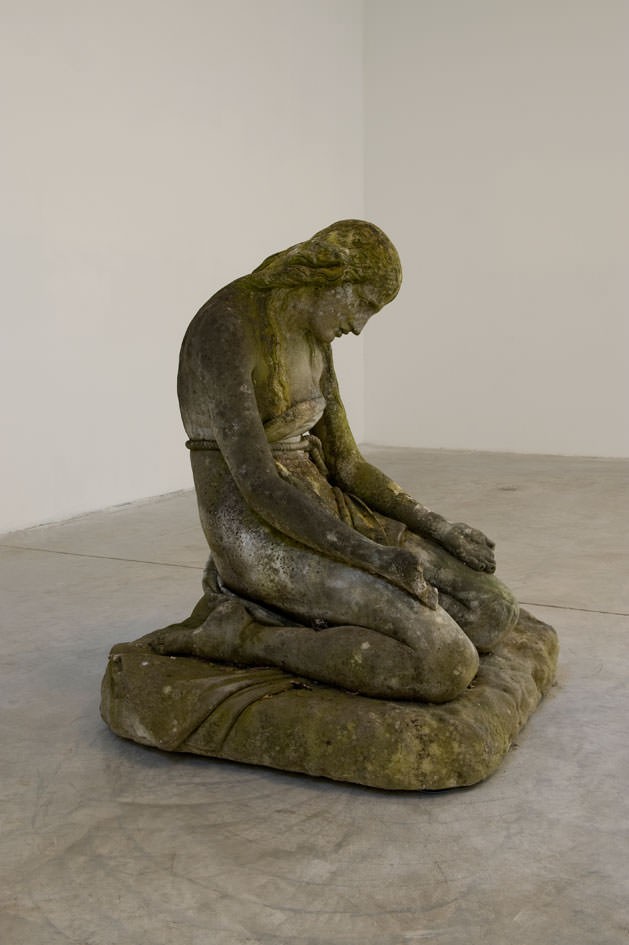 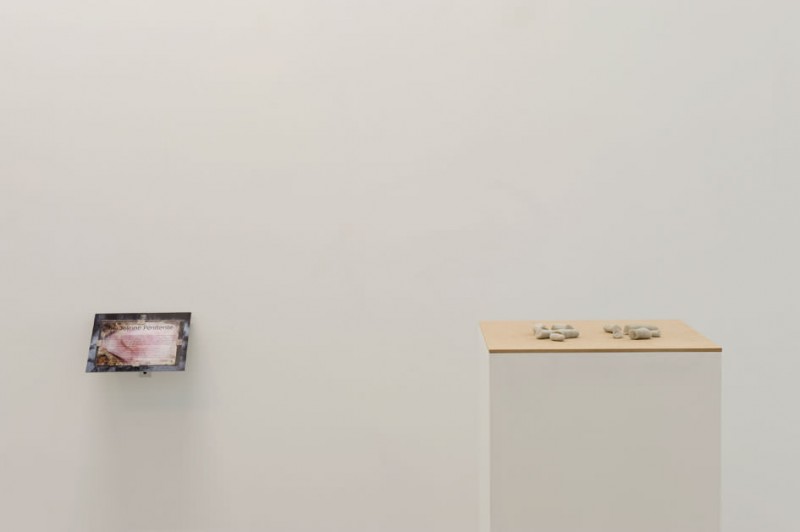 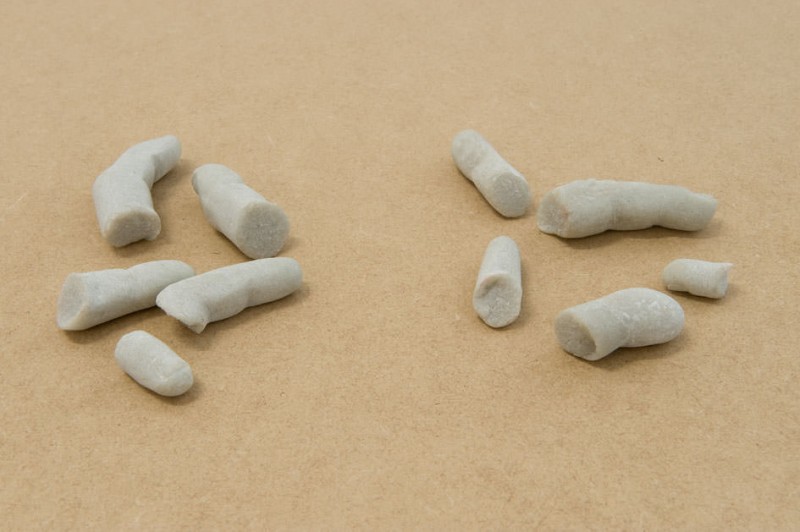 World Mirrors (2011), presented on one of the walls of the first room of the gallery, is a series of aluminum print reproductions of black and white photographs of mirrors of different styles and periods (Louis XV, Queen Ann, Georges III, Federal, Neoclassical, Empire, etc.), taken from a reference book published by Sotheby’s. This catalogue testifies to the circulation of art objects through time, constantly collected and re-dispersed. The prints, enlarged to the original mirrors size, are arranged according to the book’s original layout and hung in the space in a kind of 15th century salon style.

The original photographed mirrors are characterized by the absence of reflected images in their frames, substituted by a cloudy grey opaqueness that obscures the reflection of the setting mirrors were originally shot. This abstract space forms a surface where reflection is not possible, so much so that one’s gaze toward the weave of images is blurred upon approaching it.

Yann Sérandour had already put into play these temporal superimpositions in Yucatan Mirror Displacements (1-9), 2008, cuttings made in nine reproductions of Robert Smithson photographs that documented the movements of mirrors as they moved through Yucatan landscapes. Using catalogue reproductions of the work, Sérandour cut out the mirror’s image and replaced the voids with real mirrors, reflecting the place in which those cuts were exposed.

These reflection games are analogous to an act of reading, the continual coming and going between an inscription from the past and a present context, an interaction between what the mirror has already reflected without conserving the trace and the gaze of contemporary viewers who, in their own reflection, simultaneously plunge their vision into a kind of a temporal abyss.

In the second space of the gallery, Yann Sérandour moves a copy of the Penitent Magdalene by the Italian neoclassical sculptor Antonio Canova from its location in Chamarande (an estate just outside of Paris). In parallel, he presents the installation Penitent Magdalene (2011), composed by a photograph of a plaque and sculpted fragments gathered on a pedestal.

Yann Sérandour found the antique plaque, damaged by the weather, near the islet where the sculpture is located. It bears the following inscription:

” The Penitent Magdalene was moved from the outbuildings of the castle at the end of the 1950s and set on the island by Gino Silvestri, Auguste Mione’s son in law. A hypothesis was raised by Clario Di Fabio, director of Genova’s Museo di Sant’Agostino’s, to date this Penitent Magdalene. Effectively the original by Canova was exhibited in Paris in the 1808 salon. But upon its return from Italy, restoration was necessary, as the transport had damaged the statue and its fingers were left broken, just like the fingers of the copy. This copy is likely to have been made in 1808 in Paris from the unrestored model of the sculpture by Canova.” In view of this hypothesis, both intriguing, as it is suspect, Yann Sérandour prolongs the histories of Magdalene’s movements and misfortunes by asking a restorer to sculpt the missing parts. The sculpted fragments are presented in causal arrangement, cast like die upon a pedestal.

The gallery space is traversed by the installation, Cloudy With a Chance of a Ray of Sunlight (2011). A ray of light caught from the outside is reflected and deflected to the back of the gallery. The atmosphere of recollection that permeates the space is potentially and periodically awoken by the luminous sparks that crosses it, like a fortuitous event that suddenly deviates the process of things.