Dialogues & Erasure offers the public a dual experience: both as an outside observer of a scene and the telling of its story, and experiencing a story in an entirely different way, becoming an integral part of it. The exhibition works on different levels and with different codes for conveying a narrative. Mac Adams creates situations which, beyond the purview of art, often touch on science, sociology or psychoanalysis. 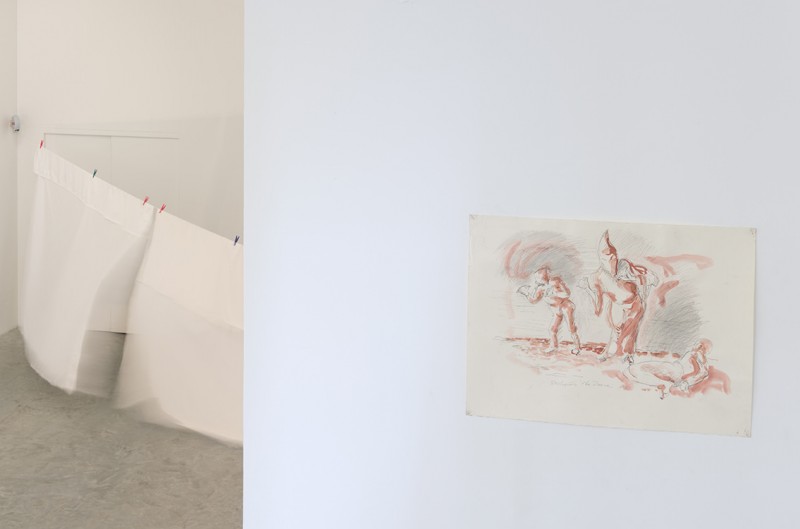 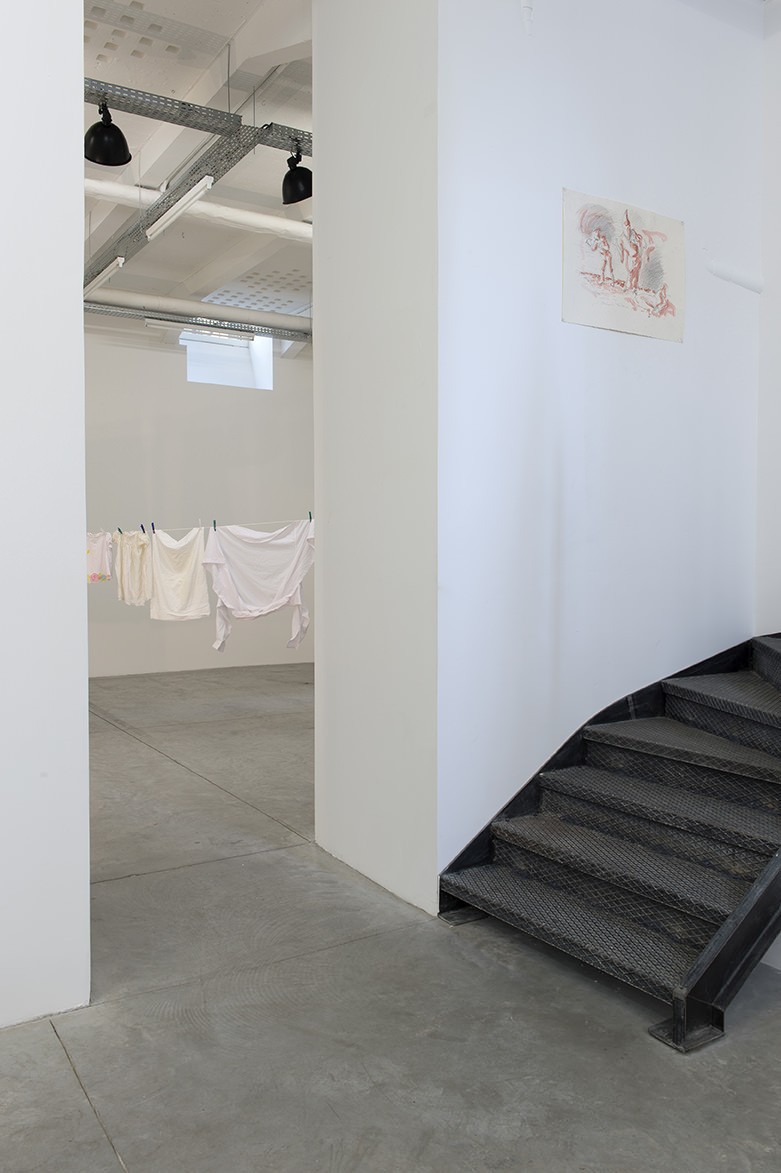 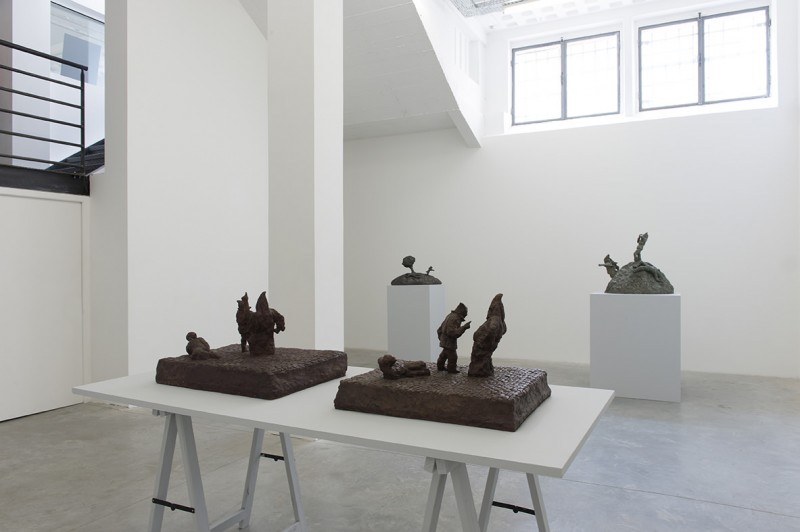 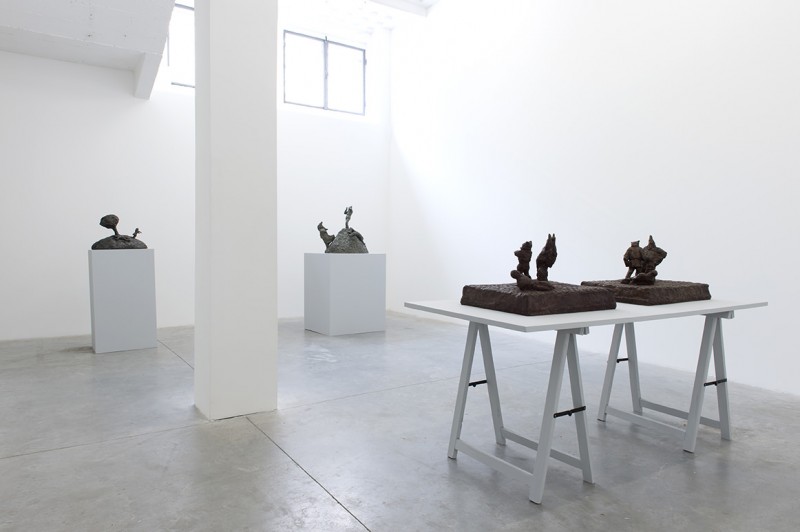 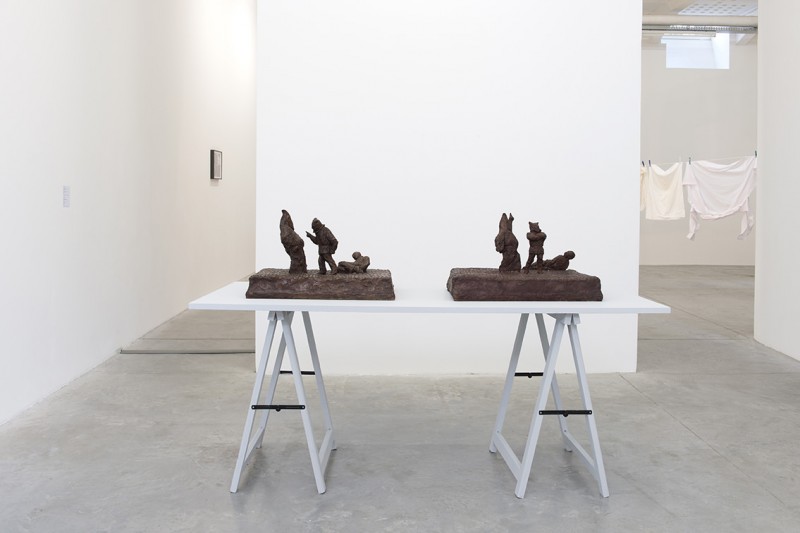 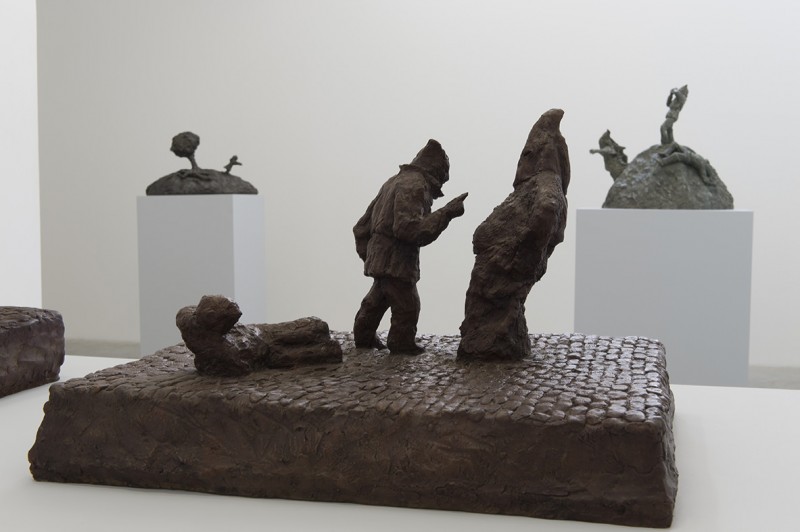 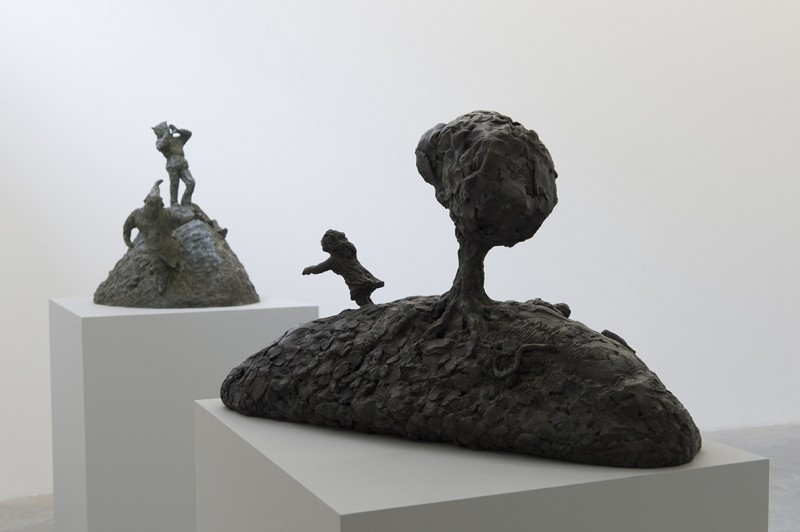 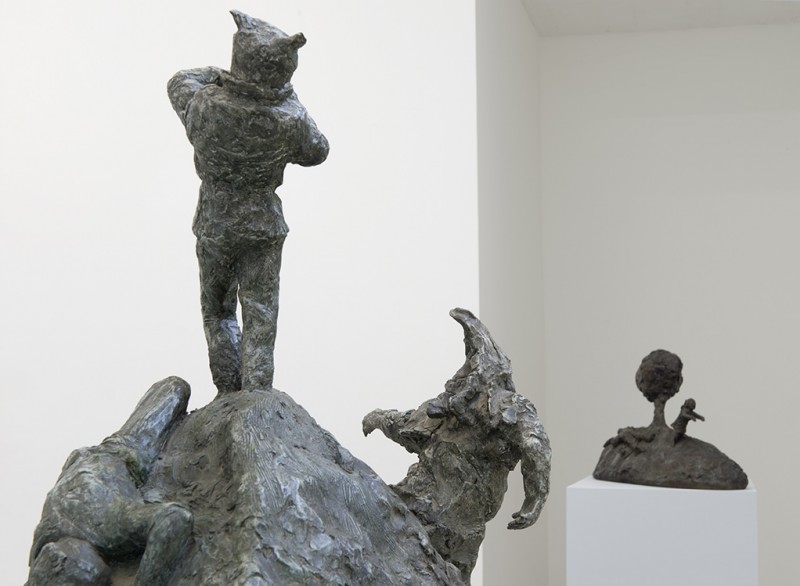 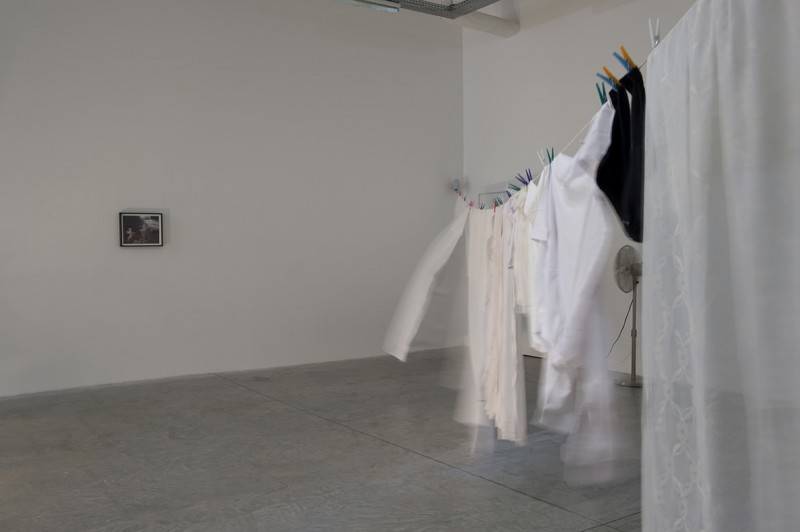 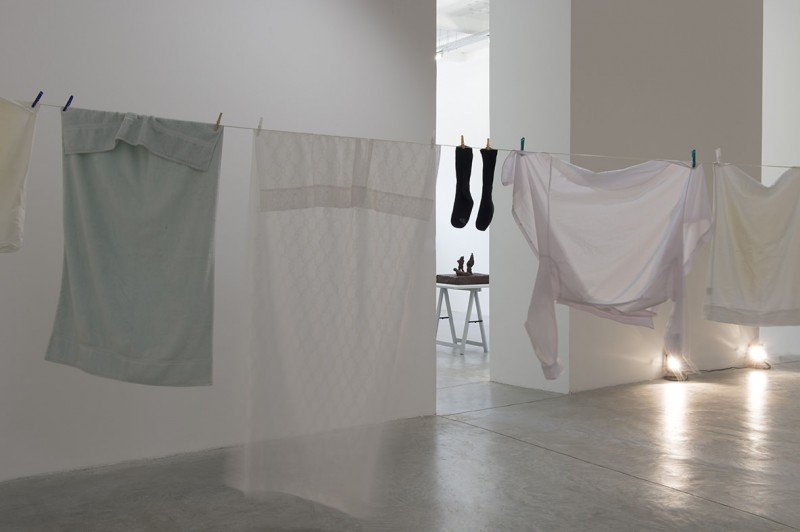 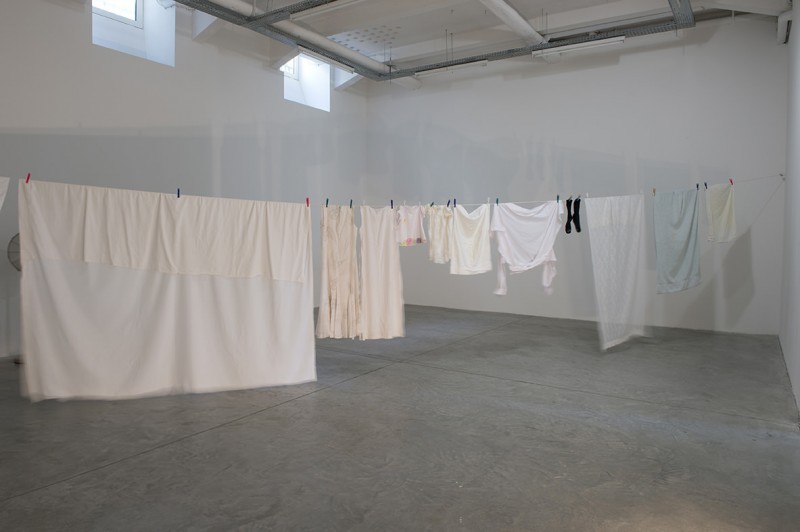 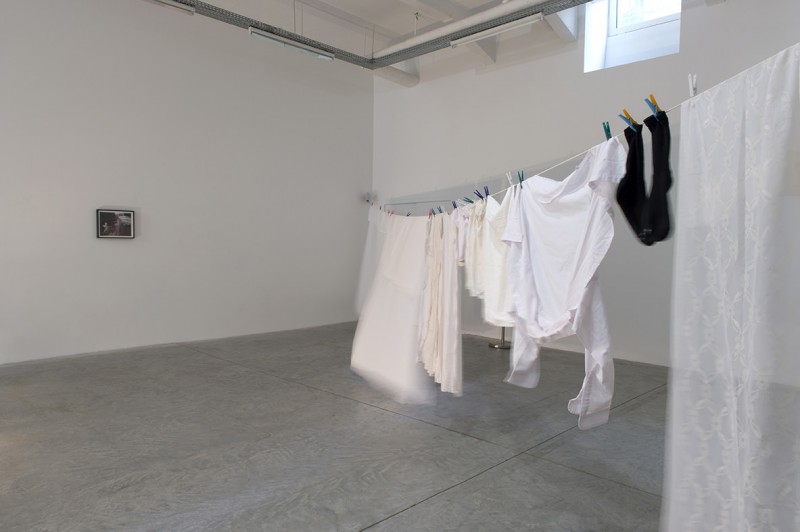 If The Dialogues, a collection of figurative sculptures, is a social commentary on the 80s, the latest installation by Adams entitled Erasure addresses the issues of memory and the subconscious. By going back and forth between projects, which are separated by thirty years, it is possible to observe the different detours the artist’s experiments have taken.

In 1983 and 1984, Mac Adams made eleven sculptures in bronze and resin, at a time when society wasn’t facing up to the offenses and tragedies of its political and social problems. According to the artist, the work recalled certain elements linked to a violent era in the UK (Adams was born and raised in Wales) as much as in the US, his adopted country. Examples include the confrontations between Margaret Thatcher’s Conservative Party and the National Union of Mineworkers, attacks claimed by the IRA, and the invasion of Grenada by the US. These are the same years that would also produce ‘Men at Work’ with their hit song ‘Down Under’ which insidiously drew attention to the destruction of Australian Aborigines and the return of painting as a factor in the art market. Thus Adams places pop culture, politics and art all on the same level. An interpretation of his work is a sort of metaphorical social commentary.

Like an unknown myth, the scenes performed by the figurines portray the evolution of strange characters from a vanished world or mysterious brotherhood. There is underlying current of violence among them even if their story remains unfulfilled. A figure threatens someone while the third person is lying on the floor. A man is shouting on the top of the hill when the two others are falling down. The drama of life, along with its conflicts and absurdities, has been transferred to the world of art. « I began drawing out figures which I thought were representative of a highly fractured personality. There was the hooded terrorist who resembled half man half cat. (during the Irish troubles of the 1980’s this had an interesting double meaning, freedom fighter or terrorist?) The pointed hooded, heavy set, character, KKK, Druid of some ancient religion or a Ubu Roi wannabe from Alfred Jarry play ‘King Ubu’. A young woman was often part of the ensemble as was a passive male, usually in some subjugated pose. This ensemble of characters acted out a variety of interchangeable roles, antagonist versus friend. The set being the cobbled street from some ancient city. Their gestures and body language became the text » comments Mac Adams.

The Dialogues succeeded Mysteries made by Mac Adams in the 1970s, which were photographic compositions of authentic staged scenes. The Dialogues is also a work made in parallel to Post-Modern Tragedies a series of photos of crime scenes which appear reflected in design objects. The Dialogues synthesizes the entire oeuvre of the artist, his construction of a scenario with multiple focuses and the positioning of a story in space. Adams’ Welsh background is also apparent, based on an oral tradition where myths and fairy tales mix the ordinary with the fantastic.

In juxtaposition to his work from the 1980s, we also present an installation from 2013 entitled Erasure (installation of stained laundry hanging from a rope, fan, photograph). For more than thirty years, Adams has been arranging mysterious events in three dimensions. For the artist, the crime scene investigation is a metaphor for the creative process : a system of inspections, of checks and balances. Victims and suspected killers inhabit his compositions along with clues carefully and methodically placed throughout. The moment is frozen and precise, the scene intentionally composed like a tableau vivant. In Erasure Adams manipulates everyday objects, cons-tructing a domestic scene (drying laundry) in real time (the fan) that elicits psychological tension. The connections between different items, as in an investigation, expose the possibilities of theatricality, as much in the telling as with the illusion. Construction and composition are as if they were the setup for a movie production into which the public is invited to take part. Each person can build their story based on the drying sheets and especially on the framed image. Here again a trait of the artist reappears : the constant shift between median Mac Adams is both sculptor and photographer.

Every photo results from a reality created by the artist, an installation or a sculpture. At the same time, his installations always originate with or have as a reference a photograph. The artist’s work explores the power of photography to convince, but also to manipulate. The photographic image must be ‘read’ to understand all of its aspects. Erasure deals with the aborted attempt to suppress (the blood on the sheets), the impossibility to erase profound memory and trauma. Mac Adams examines the role of photographer as the film of our memory.

Dialogues & Erasure is a freeze-frame, a spotlight on man in his relationships with others in society and also on his utmost solitude and intimacy.